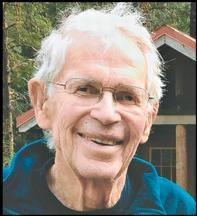 Roosevelt High School grad, World War II veteran, Purple Heart recipient, and survivor of the "SS Leopoldville" sinking tragedy. Bob attended The Burnley School of Art on the GI Bill, to pursue his dream of becoming a commercial artist. His passion for art, skiing, tennis, golf and the mountains would serve as much of his inspiration, throughout his successful career as an artist. Bob lived life to the fullest, skiing well into his 80's and golfing within 2 weeks of his passing. His wit, sense of humor and creative artistry were with him to the end. His kindness, generosity and larger than life personality will be missed by all who knew him.

Bob was predeceased by Martha, his wife of 63 years and partner in adventures that spanned the globe. He is survived by his three children, Robin Cram Hall (Tim), Sara Cram (Michael) and Doug Cram (Lisa), numerous friends and legions of fans, and his biggest fan club of all, grandchildren Kathleen, Emily, Michelle, Dana and Derek. In lieu of flowers, please make donations to the Washington State Ski and Snowboard Museum or a favorite charity in Bob's name.


A memorial is being planned for mid October, please sign the online guestbook. www.funerals.coop/obituaries
Published by The Seattle Times on Aug. 6, 2017.
To plant trees in memory, please visit the Sympathy Store.
MEMORIAL EVENTS
To offer your sympathy during this difficult time, you can now have memorial trees planted in a National Forest in memory of your loved one.
Funeral services provided by:
The Co-op Funeral Home of People's Memorial
MAKE A DONATION
Please consider a donation as requested by the family.
MEMORIES & CONDOLENCES
Sponsored by The Family.
13 Entries 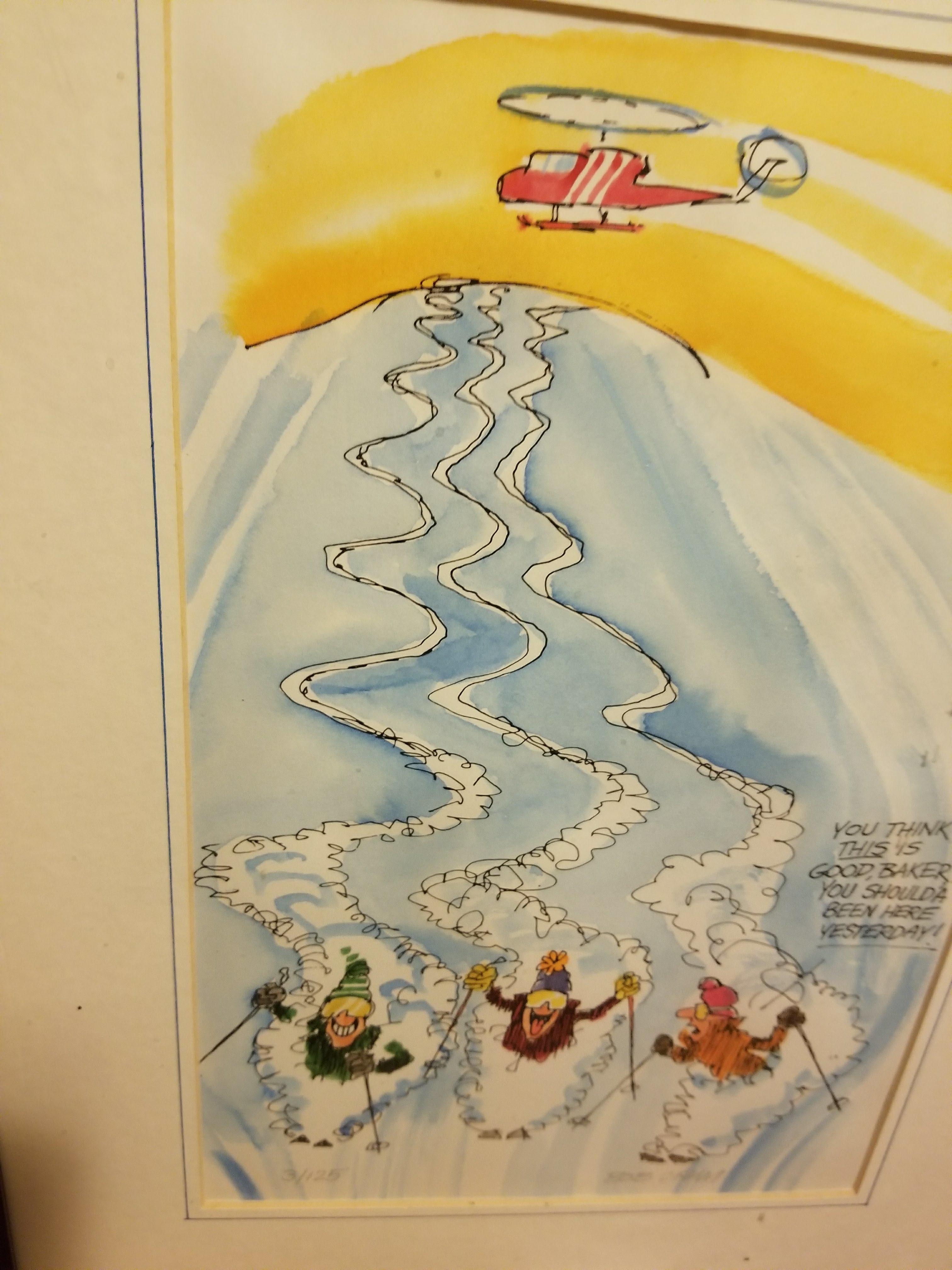 I CAN NEVER FORGET BOB AND THE GREAT FUN SKIING TRIPS HE LED, INCLUDING ONE HELI-SKIING ON SILVER STAR MOUNTAIN IN THE NORTH CASCADES NEAR MAZAMA IN 1985. THE CARTOON HE CREATED FOR ME IS TREASURED.
HIS SENSE OF HUMOUR NEVER ENDED. ONE JOKE THAT STILL MAKES ME LAUGH WAS HIS REFERENCE TO US OLD FARTS SKIING AS THE "PREPARATION H DEMO TEAM". BOB ALWAYS KNEW WE NEVER DIE IF WE NEVER STOP LAUGHING.
JOHN BAKER
Friend
December 26, 2017
Just read the wonderful story about Bob's life in "The Ancient Skier" newsletter. As a born and raised Seattle-ite, I have such fond memories of Bob as the cartooning weatherman. He was definitely a local icon and seemed like a GREAT GUY!
Robin, hello to you! We were in Mrs. Low's German classes together at Nathan Hale. Fun memories of that as well.
It is obvious that Bob will be very much missed by those who loved him and had the good fortune to know him well.
I treasure a couple of customized cartoons, which he did for us about 23 years ago, of my husband and his brother. They hang in our ski condo at Mt. Baker and will always be cherished.
Maija Eerkes
November 13, 2017
Susie and I will miss you Bob, Fairview grade school and Roosevelt high school classmate Don Sandall.
September 22, 2017
As the days and weeks pass, and as you return to life's routine, may you continue to feel comforted by the love and support of family and friends. Most importantly may you draw close to God. He is ready to help.
Jeanette
September 4, 2017
Robin Sara Doug and all the Cram Family,

Blair and I so understand what a change this is for you. End of a wonderful run of Bob and Martha the inseparable unit that was intrinsic to each person. They were both such wonderful role models as to how to live. I especially appreciate their example now as we enter the "golden years" ourselves.

We send our condolences and wishes for the best of memories always.

Looking forward to seeing you soon to celebrate your fathers life. 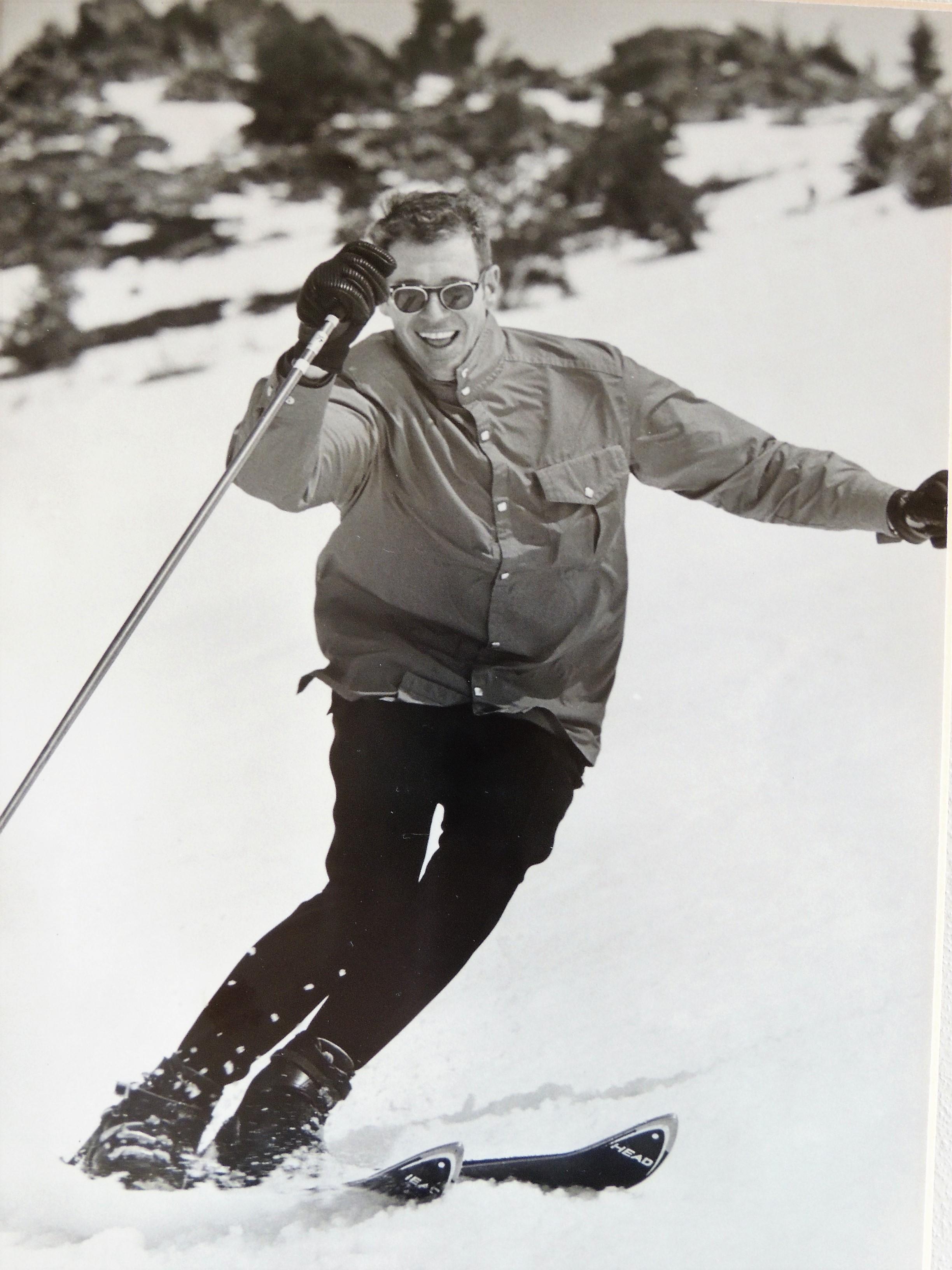 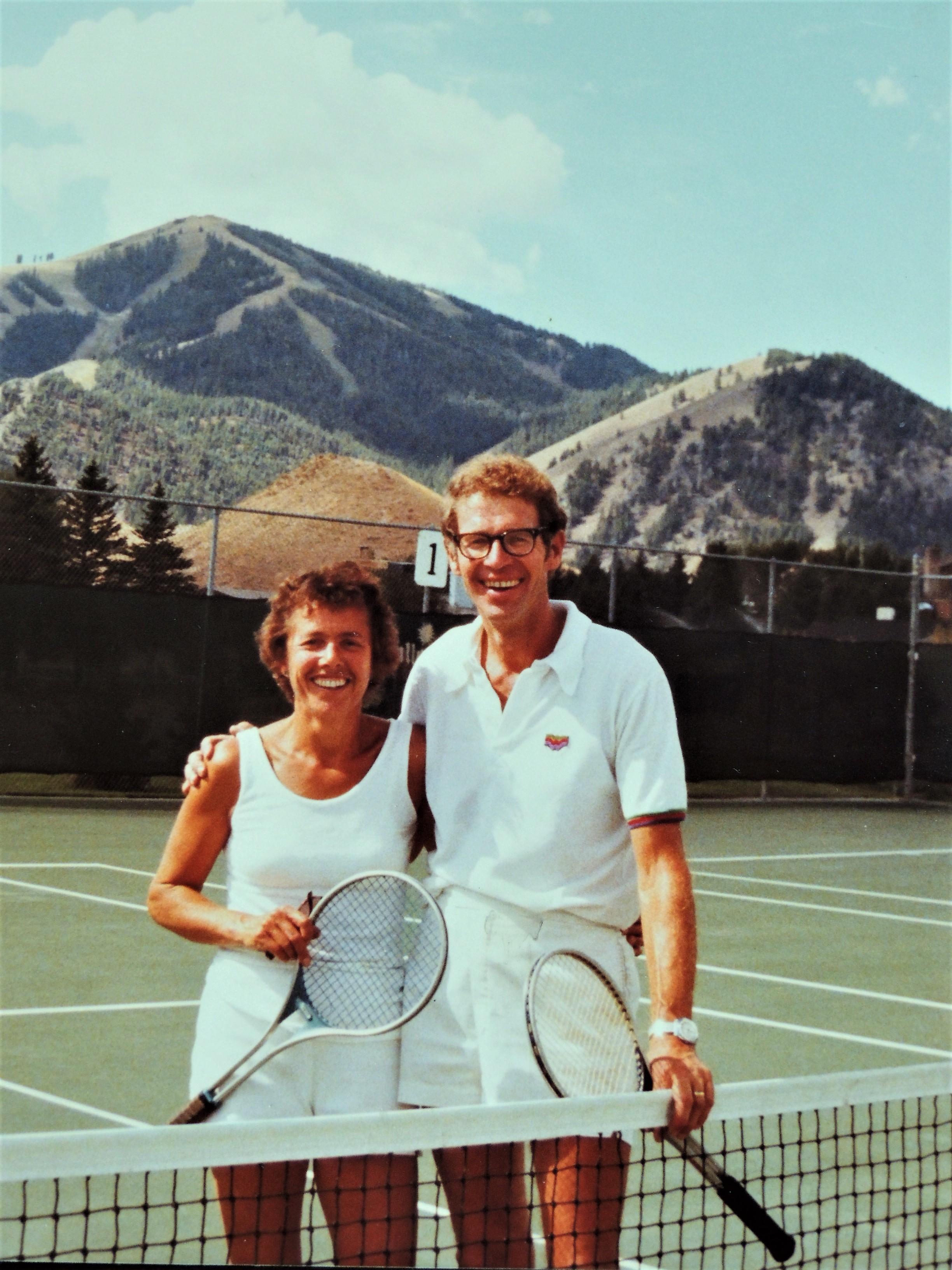 Doug Cram
August 8, 2017
I'm very sorry for your loss, and would like to let you know that I remember Bob Cram from watching the news and weather in Seattle many years ago. He was great! The little cartoon at the bottom of the obituary was a sweet touch. My sympathies to his family and friends.
Beth Fox
August 8, 2017 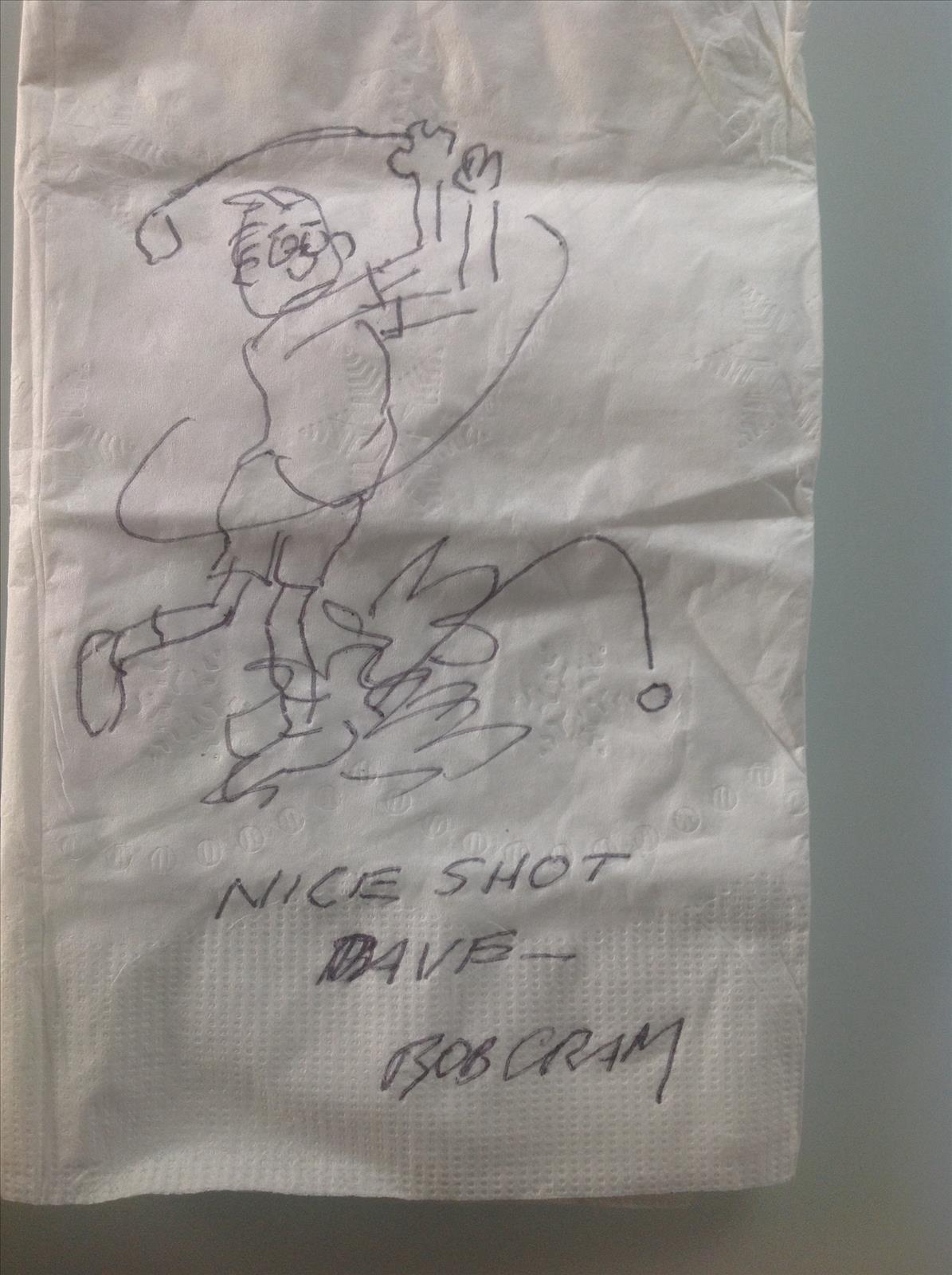 I was a walk on single who joined a 3-some at Foster on July 12. When I discovered it was Bob Cram I was golfing with, I told him I grew up watching him on King5 news. He was such a joy to golf with and he made the day special for me.
Dave Hayasaka
August 7, 2017
Thanks bob.
Mike Grow
August 7, 2017
I am saddened to hear about the passing of Bob. He was such an inspiration to me . He will always be my favorite weatherman and cartoonist/artist. His love of skiing in the northwest was contagious. To all of us kids taking ski lessons at Snoqualmie in the days of cable bindings, rope tows and lace up boots! Bob and Martha leave a great legacy for all of us as we age.
The Evans family sends great sympathies to his wonderful family!
Betsy Evans
August 6, 2017
I will always remember his wonderful sense of humor and his need to ad his own label/name to every person and place he ever came into contact with.
Bob Foster
August 6, 2017
Showing 1 - 13 of 13 results