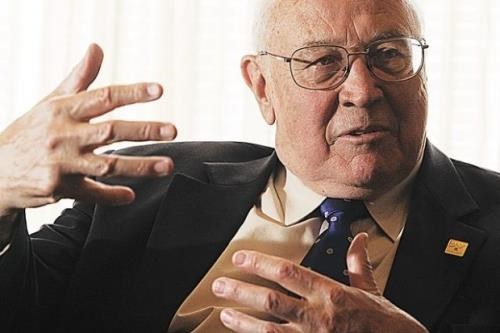 Erik D. Olsen
December 11, 1936 - September 14, 2021
Erik D. Olsen, a Pleasanton resident and retired executive passed away on September 14 at the age of 84. Erik is survived by his loving wife of 62 years, Jacqueline Olsen, the original "Jackie O", three daughters, Lynnea Olsen, Andrea Olsen, and Jennifer Rodriguez, son-in-law Jon Rodriguez, and three wonderful grandsons, Carl Rodriguez, Emmett Rodriguez, and Erik Olsen.
Dr. Olsen has a wide-ranging record of accomplishments. Erik was a Nebraska all-state basketball player in 1954 for his Omaha Benson High School Bunnies. After graduating from the University of Nebraska, he served as a Captain in the U.S. Army. A practicing dentist, he was the first recipient of the Hillenbrand Fellowship in Dental Administration from the American Dental Association. At age 40, Dr. Olsen was named President and CEO of Delta Dental of California. When Dr. Olsen stepped down after 15 years, one of every three people in California had Delta Dental benefits. After leaving Delta Dental, Dr. Olsen became an active AARP volunteer and was appointed AARP State President in Arizona in 1996. He was elected to AARP's National Board of Directors in 2000 and was named AARP National President in 2006 where he was instrumental in working on healthcare reform.
Since his retirement from AARP, he and Jackie enjoyed residing in the beautiful Lake Tahoe community of Glenbrook, Nevada and most recently residing in the retirement community of Stoneridge Creek in Pleasanton, California. Erik enjoyed playing and learning the many complexities of the game of bridge, participating on a morning Zoom call discussing key issues of the day, and being an avid cruciverbalist.
His daughters share many fond memories of moving cross country to California, Boulder Creek, boating in Lake Tahoe, witnessing Dwight Clark's "The Catch," and always getting the best advice for life. In addition to being a strategic planner, he lived his life with compassion, kindness, humility, patience, forgiveness, and love. The biggest pride in his life is the legacy he has created through his family highlighted by his three grandsons, Carl, a tech software engineer, Emmett, a professional ballet dancer attending college, and his name-sake, Erik Olsen, high school scholar, athlete and the new "Big E."
We want to extend our deep gratitude to the numerous caregivers and medical personnel who helped him during the last months of his life – with special thanks to Priscilla and Aman, who he thought of as daughters. We will miss him greatly!
Donations may be made in the memory of Erik Olsen to the First Presbyterian Church of Livermore for the discretionary use of helping the needy of our community.

Published by San Francisco Chronicle from Sep. 17 to Sep. 19, 2021.
To plant trees in memory, please visit the Sympathy Store.
MEMORIAL EVENTS
To offer your sympathy during this difficult time, you can now have memorial trees planted in a National Forest in memory of your loved one.
MAKE A DONATION
MEMORIES & CONDOLENCES
2 Entries
Grief can be so hard, but our special memories help us cope. Remembering you and your loved one today and always. Your family are in my thoughts and prayers.
Marlene Rengert
Friend
October 4, 2021
I wish to extend my sincere condolences to Mrs. Olsen and the family. Erik was a valued friend and member of the AARP Nevada family. He and Jackie were with us for countless Volunteer Recognition events and community activities. I treasured his wisdom and sense of humor. He made a difference throughout his lifetime. Carla Sloan, Retired AARP Nevada State Director
Carla Sloan
Work
October 4, 2021
Showing 1 - 2 of 2 results