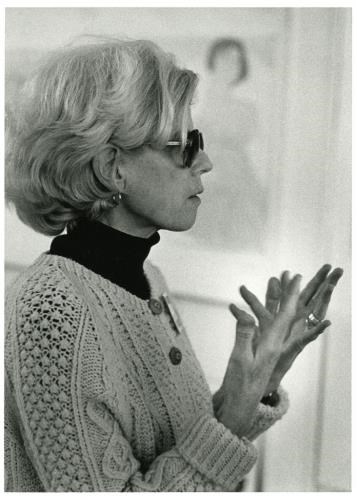 Florence Hauser—gifted artist, beloved mother, devoted friend—died peacefully at home at the end of January 2021 at the age of 93. She was born in San Francisco in 1927, the daughter of Mary Alice DeBonis (originally of New York City) and George DeBonis (originally from southern Italy and eventually president of the City of Paris department store on Union Square). She spent the second half of her childhood in the East Bay, where she attended Piedmont High School. In 1949, she graduated from UC Berkeley with a BA in art, having been particularly influenced by her professor Chiura Obata and his Japanese brush techniques.
After college, she worked for several years as a commercial artist, designing holiday cards and candy boxes, and illustrating fashion ads for local newspapers. Often the department stores would deliver their latest apparel offerings in the morning and by the end of the day Florence would have to create drawings of women wearing the items for the next day's paper.
On August 6, 1955, she married the love of her life, the attorney John N. Hauser. In the first years of their marriage, Florence and John lived on Russian Hill, spending off hours frequenting the cafes and clubs of North Beach. Florence would commute to work by walking down the steepest block of Lombard in heels (required by her employer) and catching a bus on Polk Street.
Later, the couple moved to Cow Hollow, which Florence thought at the time was "like moving to the sticks." There they had four children: Sarah, Katie, Pierre, and Jonathan (who died as an infant). Florence applied her artistic eye to decorating their shingled house (previously a boarding house) with a tasteful but understated style. She was also known for her delicious continental cuisine. But beyond these practical tasks, she had an uncanny gift for endowing the house with a sense of warmth and love—it was a true home, a place her children considered a welcome refuge long after reaching adulthood. Florence was never too busy to hear about what any of her children were going through, always a sympathetic ear.  And because of her loving spirit, she had many dear friends, some of whom she had known since childhood.
In 1978, after her youngest child headed to college, Florence resumed making art, this time fine art, having in the meantime taken graduate classes at the San Francisco Art Institute.
Florence had a naturally creative spirit, and her art was alive with spontaneity, fluidity and immediacy. With very few lines, she could capture a moment in time and space with so much feeling. In art school, the instructors had been teaching painting in a cubistic style. However, this did not resonate with Florence. Her natural drawing line was so confident, and her brushwork so immediate, that her gifts rang truer than her teachers' instructions. She worked in a variety of media. Her sense of color and composition was extremely intuitive, and she would push her work, not from an intellectual reduction, but from gut instinct.
She had first exhibited in her twenties at an Art Association Annual at the San Francisco Museum of Art (now SFMOMA). But after 1978, she exhibited widely in the Bay Area and elsewhere. Her work was shown at such venues as Jan Holloway Fine Arts, Yerba Buena Center for the Arts, Diego Rivera Gallery at San Francisco Art Institute and Bradford Smock Gallery. Florence had a long relationship with Woodward Gallery in New York City, where her art was featured in group exhibitions. Woodward's owners believed Florence's watercolors beautifully captured the female essence. In addition to appearing in galleries, Florence's work is in private collections in the United States and Europe.
In re-starting her career, Florence derived support and inspiration from several drawing groups, particularly the Thursday Drawing Group, a collection of women artists who gathered weekly in a studio at the Noonan Building at Pier 70.
Florence is survived by her daughter Sarah and Sarah's partner Jeffrey Lerer, her daughter Katie, Katie's partner Josh Drobner, and their dog CocoRose (Florence's therapy pet), her son Pierre and his wife Abigail Disney; and her grandchildren: Charlotte Hauser, Olivia Hauser, Henry Hauser, and Eamon Hauser. In lieu of flowers, donations can be sent to Episcopal Community Services (415-487-3300).


Published by San Francisco Chronicle from Feb. 5 to Feb. 7, 2021.
To plant trees in memory, please visit the Sympathy Store.
MEMORIAL EVENTS
To offer your sympathy during this difficult time, you can now have memorial trees planted in a National Forest in memory of your loved one.
MAKE A DONATION
MEMORIES & CONDOLENCES
1 Entry
Flo was my Godmother, and in her later years we became close and had some very profound conversations about spirituality. I saw her as an extremely enlightened and soulful being. She was so kind to me throughout some very difficult years of illness and I shall never forget her. I am very fortunate to have one of her beautiful paintings. It is with great sadness that I say goodbye to her...(but only for now!)
Charlotte Ritchie
Friend
February 7, 2021
Showing 1 - 1 of 1 results