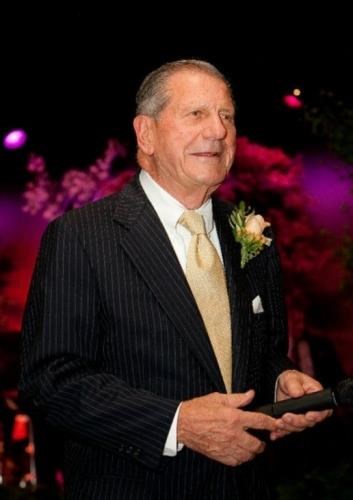 BORN
1925
DIED
2021
FUNERAL HOME
Green Street Mortuary
649 Green Street
San Francisco, CA
UPCOMING SERVICE
Memorial Mass
Dec, 14 2021
10:30a.m.
St. Dominic's Catholic Church
Send Flowers
Guido Saveri
June 10, 1925 - October 18, 2021
Guido Saveri, a nationally recognized antitrust attorney and pioneer of the modern class action, passed away in San Francisco on October 18, 2021 surrounded by his family. He was 96 years old.
Guido was born in San Francisco on June 10, 1925 to Joseph and Benvenuta Saveri, immigrants from northern Italy. He married Catherine "Missy" Yoell, his wife of 60 years, in San Francisco. Together they had four children and shared a wonderful life in San Francisco and at their country home in Sonoma until Missy's passing in 2015.
Guido lived his entire life in San Francisco. He grew up in North Beach and Russian Hill surrounded by extended family and many friends. He was a member of the Salesian Boys Club and is one of the last survivors of the Jones Street Boys. In 2015, Guido received the Salesian Old Timers "Father Trinchieri Medal" in recognition of his devotion to and mentorship of the Club's youth.
Guido attended San Francisco public schools, graduating from Galileo High School ('42) at the age of 16 with top academic honors. He also played baseball. Guido was a standout third baseman, All City San Francisco, and was inducted into the Galileo Athletic Hall of Fame. He was scouted by the Chicago White Sox and had the opportunity to play professional baseball but decided to pursue his education. He graduated from the University of San Francisco, summa cum laude ('47) and the University of San Francisco School of Law, summa cum laude ('50) as the number one student in his class. He was admitted to practice in 1951 and joined the San Francisco law firm of Pillsbury, Madison & Sutro. In 1959, he and his brother, Richard Saveri, started the firm Saveri & Saveri and associated with Joseph L. Alioto in the practice of antitrust and other corporate litigation.
From the time he started his firm, Guido specialized in antitrust litigation. He served as co-counsel in several groundbreaking antitrust lawsuits, including the Union Carbide case before the Tenth Circuit and the Continental Ore case before the United States Supreme Court involving the price fixing of vanadium in the Colorado Basin during World War II where he served as one of the chief trial counsel with Mr. Alioto. Both cases were forerunners of present-day class action litigation and led to the development of Federal Rule of Civil Procure 23 and some of the most important decisions in the field of antitrust law.
Throughout his practice, Guido was appointed to leadership positions and actively participated in numerous major class action antitrust cases across the country. He testified before Congress on antitrust matters, lectured before professional associations, and wrote for various periodicals on antitrust topics. In 2007, the State Bar of California, Antitrust and Unfair Competition Law Section honored Guido as Antitrust Lawyer of the Year. The University of San Francisco School of Law honored him as Alumni of the Year in 2019.
Guido had a lifelong love of music. He was an accomplished clarinet and saxophone player and a frustrated pianist. He led the youth orchestra at the Salesian Boys Club for several years. Later, he and Missy were long time subscribers to the San Francisco Symphony and Opera. Guido was a member of the Bohemian Club.
Guido is survived by his four children, Lisa Saveri Waste (William), Francesca Saveri, Andrea Saveri Gunier (Robert) and Richard A. Saveri (Christina); and five grandchildren, Alessandra Waste, William H. Waste, III, Gianna Gunier, Paola Gunier, and Marco Saveri. His brother, Richard Saveri, predeceased him.
The family would like to thank Brianna Contreras-Quiroz, RN and José Duran, CNA whose compassionate care, kindness, and love enabled Guido to continue to live a full and independent life.
A Memorial Mass will be held on December 14, 2021 at 10:30 a.m. at St. Dominic's Catholic Church, 2390 Bush Street, San Francisco.

Published by San Francisco Chronicle from Nov. 17 to Nov. 21, 2021.
To plant trees in memory, please visit the Sympathy Store.
MEMORIAL EVENTS
Dec
14
Memorial Mass
10:30a.m.
St. Dominic's Catholic Church
2390 Bush Street, San Francisco, CA
Funeral services provided by:
Green Street Mortuary
MAKE A DONATION
MEMORIES & CONDOLENCES
Sponsored by Green Street Mortuary.
1 Entry
Getting to know Guido and his fine family was a highlight for me as Dean of his Law School. Guido Saveri was a force larger than life and the perfect subject for a movie. He exemplifies strength of family, never forgetting the underdog and having a vision for the next generation. The son of Italian immigrants, he represents well their grit and determination during the Depression and successes in subsequent decades. He devoted his career to be a passionate voice in the courtroom for those who needed advocacy. Now, he's at rest but entering the Field of Dreams with the other Galileo, North Beach and Salesian ballplayers of his youth. We will miss you, Guido.
John Trasvina, Immediate Past Dean, University of San Francisco School of L
School
November 21, 2021
Showing 1 - 1 of 1 results