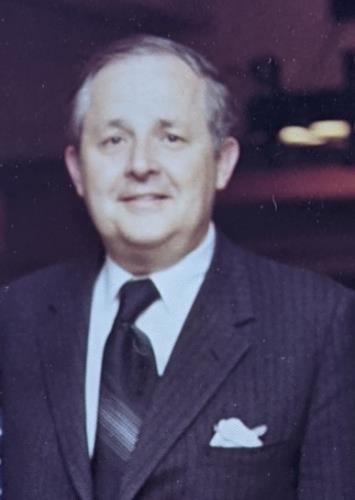 His early NYC legal career was interrupted by World War II. First as a field artillery lieutenant, then as an intelligence and operations officer, he served in the US Army, including assignments at the Office of the Army Chief of Staff in DC and on General Dwight Eisenhower's staff in Europe. During the Occupation of Germany, he served as a Military Government Judge in Frankfurt-am-Main. (He remained a member of the Army reserves until 1974, when retired as a Colonel.)

Following WWII, he returned to NYC to resume his law practice and there met Eileen Colligan, also a lawyer. They married in 1950 and moved to Washington, DC, in 1951, where he joined the Department of Defense as a civilian lawyer and began his engagement in post-war energy development, liaising with the Atomic Energy Commission and acting as general counsel of the Defense Electric Power Administration. At the conclusion of his government service, he and Eileen moved to San Francisco where he joined the Pacific Gas & Electric Company and they raised a family of eight children. Through his career as an attorney for PG&E (1953-79, ending as VP and General Counsel), he handled its rate cases and the permit proceedings to construct and to operate the Diablo Canyon nuclear power plant.

His compassionate commitment to justice and fairness was reflected in his active participation in and leadership of key civic organizations, notably the Human Rights Commission of San Francisco, Legal Aid Society, the Archdiocesan legal advisory committee, and the Golden Gate District Boy Scouts of America.

With a 6'2" frame and erect bearing, he could seem imposing and intimidating, yet his family and friends knew his playful and funny side. From exuberant celebrations of any occasion—even afternoon tea— to his joyful singing of oft-unsung song verses, to his active physical exercising, he shared his excitement with us all. A man of letters, he passed on his love of learning to his children and grandchildren. Even when a seemingly quiet observer, he nevertheless invariably asked the most pertinent and insightful questions at any gathering. He thrived in the fellowship of the Serra, Commonwealth, Sometimes Tuesday, Yale, and Pacific Union clubs, and in his enthusiastic involvement in his children's many activities (at times to their dismay!)

A visitation and rosary will be on Thurs, April 29, 4-8pm, Duggan's Serra Mortuary, 500 Westlake Ave., Daly City, and a funeral mass on Fri, April 30 at 11am, St. Ignatius Church, 650 Parker Ave., San Francisco. Private Internment. Donations, in lieu of flowers, to the Serra Club and Holy Family Day Home.

Published by San Francisco Chronicle from Apr. 26 to Apr. 30, 2021.
To plant trees in memory, please visit the Sympathy Store.
MEMORIAL EVENTS
Apr
29
Visitation
4:00p.m. - 8:00p.m.
Duggan's Serra Mortuary
500 Westlake Avenue, Daly City, CA
Apr
30
Funeral Mass
11:00a.m.
St. Ignatius Church
650 Parker Ave, San Francisco, CA
Funeral services provided by:
Duggan's Serra Mortuary
MAKE A DONATION
MEMORIES & CONDOLENCES
Sponsored by Duggan's Serra Mortuary.
4 Entries
I almost never buy a Chron these days, but for some reason, that day I did -- in time to marvel at this wonderful life and pray for him and his family. I was a "temp" worker on call for PG&E in the '80's, always in the Law Dept. I so miss the good energy of our City and am working on a book (We Had Love) about my 30 years there, 1972-2002. After a USAF stint, I washed up in the City and was baptized at Old Saint Mary's. I was an early word processor and beta tester. Now in Tahoe, waiting to move to Placerville, waiting for lockdown to end, pushing 80 myself, well, I was over the moon, so uplifted, to read about this beautiful life. God bless!
Mimi Routh
Coworker
May 4, 2021
Please except my deepest sympathies to you and your family at this time of grieving. May God be with you and your family in this time of sorrow.
Simone Taylor
May 2, 2021
I was secretary to John Morrissey from 1959 to 1970 while at PGandE. I am now 89 and had numerous bosses over time but none equal to John morrissey. He was a wonderful person. As each of his children entered school up went the school picture placed on his book shelf in the office. I really enjoyed that. I never knew of his impressive career. God bless the family.
Lois cameron smith
Coworker
April 30, 2021
Love you Dad.
Peter Morrissey
Son
April 27, 2021
Showing 1 - 4 of 4 results