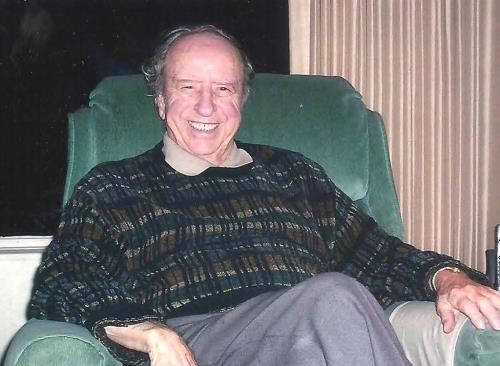 Joseph W. Garbarino, Professor Emeritus at the Haas School of Business, University of California, Berkeley for thirty-nine years, veteran of service in World War II and Korea and labor arbitrator, died Oct.18th of 2016. He was 96 years old.
Professor Garbarino was born in Medina, N.Y. He attended Duquesne University where he was a member of the ROTC. Immediately after graduation in 1942 he entered Army service as a second lieutenant in the field artillery and after training was stationed in Hawaii. He made three amphibious landings at Eniwetok as an Artillery Forward Observer, and was awarded the Bronze Star. His division also fought in the battle of Saipan and the campaign for Okinawa. After Okinawa was secured, they were preparing for the invasion of Japan when the atomic bombs brought about the end of the war. After the Japanese surrender, he served in the occupation forces in Japan. He was discharged as a Captain in October 1945 and enrolled in the Ph.D. program in Economics at Harvard University in the spring of 1946. After being awarded the Ph.D. in Economics in 1949, he joined the faculty of the University of California, Berkeley with a joint appointment as an Assistant Professor in the School of Business and as Research Associate in the Institute of Industrial Relations. At Berkeley, he taught principally economics, industrial relations, compensation, and collective bargaining.
In 1951, he was recalled to active duty during the Korean War and served in the Program Review and Analysis Division of the Office of the Army General Staff in the Pentagon for a year and a half. He was released from active duty in 1953 and returned to the Haas School of Business.
Professor Garbarino's principal research interests were in the fields of wage and income policy, health economics and faculty and professional unionism. In addition to numerous academic articles, he was the author of three books and the co-author of a fourth, published as a member of the staffs of the UC Institute of Industrial Relations, the Brookings Institution and the Carnegie Foundation for the Study of Higher Education. Various publications were republished in Japanese, French and Portuguese. He was a member of the American Economic Association and the Industrial Relations Research Association.
He was appointed Director of the Institute of Business and Economic Research in 1961 and served in that capacity for twenty-seven years until his retirement in 1988, making him probably the longest serving Director of a research unit on the Berkeley campus. On his retirement, he was awarded the Berkeley Citation for Distinguished Achievement and Notable Service.
In the 1960's, as Director of the Ph.D. program in the School of Business he was instrumental in updating the doctoral program curriculum from its exclusive concentration on economics to include the other social sciences, particularly psychology and sociology, as fields of study in business administration.
As chairman of the Committee on Academic Freedom during the Free Speech Movement of the 1960's he introduced to the Academic Senate the December 8 resolution that defined the faculty in support of free speech on campus.
A longtime member of The Faculty Club, he served on the Board of Directors and also as President of the Club. During his term as President he oversaw the first admission of women to membership in the Club.
Professor Garbarino was appointed a Fulbright Lecturer at the University of Glasgow, Scotland in 1969 where he served as a consultant to the Labor Parliamentary Minister in charge of the then Department of Employment. Professor Garbarino also taught as a visiting faculty member at Cornell University, UCLA, the University of Buffalo, and the University of Minnesota and was a visiting scholar at Columbia University, the University of Warwick in England, University College, Dublin, Ireland, and the London School of Economics.
He served as a labor arbitrator in the Bay Area and nationally from 1960 to 2000, overseeing more than four hundred cases. He served as the Impartial Chairman of the grievance arbitration systems of the Northern California Trucking Association and the Teamsters contracts as well as the for the Food Processors and Growers. He was also a member of the standing panels of arbitrators for the Retail Food industry, the Social Security Administration and the Las Vegas hotels. He was chairman of the state Industrial Welfare Commission.
He was married to the former Mary Jane Godward for sixty five years. He is survived by his four daughters, Ann and Joan of Berkeley, Susan of Oakland, and Ellen of Sydney, Australia and his five grandchildren. The family celebrated innumerable holidays, birthdays and milestones together in the dining room of the family home in El Cerrito where Joe and Jane lived from 1972 until 2011.
A memorial mass will be held at St. Jerome's church in El Cerrito, CA on Monday, Feb 20th at 10:00 am with a reception in the parish hall immediately following.

To plant trees in memory, please visit our Sympathy Store.
Published by San Francisco Chronicle from Jan. 31 to Feb. 11, 2017.
MEMORIAL EVENTS
Feb
20
Memorial Gathering
in the parish hall
, CA
Feb
20
Memorial Mass
10:00a.m.
St. Jerome's church
, El Cerrito, CA
MAKE A DONATION
MEMORIES & CONDOLENCES
1 Entry
His wife and my dad were first cousins. I recall fondly, my visit to my "California" cousins in the mid 1980s when I was just a teenager. We had such a wonderful time. So very said to read of his passing, and of hers as well.
Cassandra
April 25, 2018
Showing 1 - 1 of 1 results