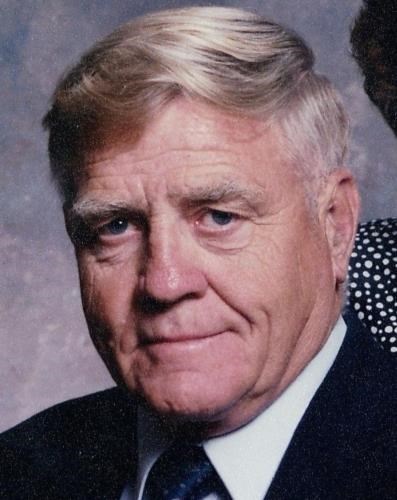 Ray DeJong passed away from heart failure in his home in Albany, CA on his 92nd birthday. He was born in South Dakota and raised on a cattle ranch until moving with his family at age 12 to an Enumclaw, Washington dairy farm. As a teenager, Ray milked cows, worked in the forests and discovered football. During WWII he enlisted in the Navy Air Corp program. Ray completed his Navy pre-flight training at Moraga's St. Mary's College where he met and fell in love with his future wife, Ada Jean MacKellar of Albany, CA. After serving 2 ½ years in the Navy, Ray enrolled in U.C. Berkeley in 1947 and played football on Cal's Pappy Waldorf coached 1949 & 1950 Rose Bowl teams.
From 1950 to 1988, Ray taught P.E. at South San Francisco High School. In the summers, he ran South San Francisco's American Red Cross swim program. Ray coached football and wrestling during the majority of his 38 year teaching career. He won many football championships and Coach of the Year Awards, but won many, many, more friends during his lifetime. Ray has been inducted into three sports Halls of Fame: Enumclaw, WA high school sports hall of fame, San Mateo County Sports Hall of Fame and the California Coaches Hall of Fame.
He supported Cal football for 70 years as both player and loyal fan, attending all home games. Ray was a gentle giant of a man. He selflessly took care of all around him as son, husband, dad, grandpa, neighbor and friend. Ray is preceded in death by his beloved wife of 62 years, Ada Jean. He is survived by his children Jim and June DeJong, daughter-in-law Jane Gerughty, and grandchildren Jeff and Janelle DeJong.
A memorial service and lunch reception will be held on Sunday, June 3, 11 a.m. at the South San Francisco Elks Lodge, 920 Stonegate Drive. In lieu of flowers, donations may be sent to the South San Francisco Athletics Booster Club at South San Francisco High School, Attention Nancy Hoffer, 400 B St., South San Francisco, CA 94080
To plant trees in memory, please visit our Sympathy Store.
Published by San Francisco Chronicle from Apr. 13 to Apr. 15, 2018.
MEMORIAL EVENTS
Jun
3
Memorial service
11:00a.m.
South San Francisco Elks Lodge
920 Stonegate Drive, CA
MEMORIES & CONDOLENCES
18 Entries
Seems Mr Dejong touched the lives of many not just teaching but in many other ways, rest in peace.
Jorge Villavicencio
January 21, 2020
Today 1/21/2020 I found myself thinking about Mr Dejong again he was in my thoughts every once in a while, always good thought, my PE teacher in ssf high, he was a good person he sold me and some school friends a combined insurance policy that insurance came in handy so many times for me,he was a great PE Coach I played in the band for ssf high in the football games and got in trouble with him a few times being to rough playing flag football made me run laps a few times, but I always respected him he was just a good human being always looking out for our best interests as students,I looked him up today to see if I could get another insurance policy from him ,to my surprise I found his obituary I find myself with tears in my eyes reading about all his achievements definitely a special human being I am proud to have had him in my life ,rest in peace Mr Dejong and my condolences to his proud family you lost a great treasure. Jorge villavicencio class of 75.
Jorge Villavicencio
January 21, 2020
My sincere condolences to the family. May you find comfort in reading Romans 15:13.
April 19, 2019 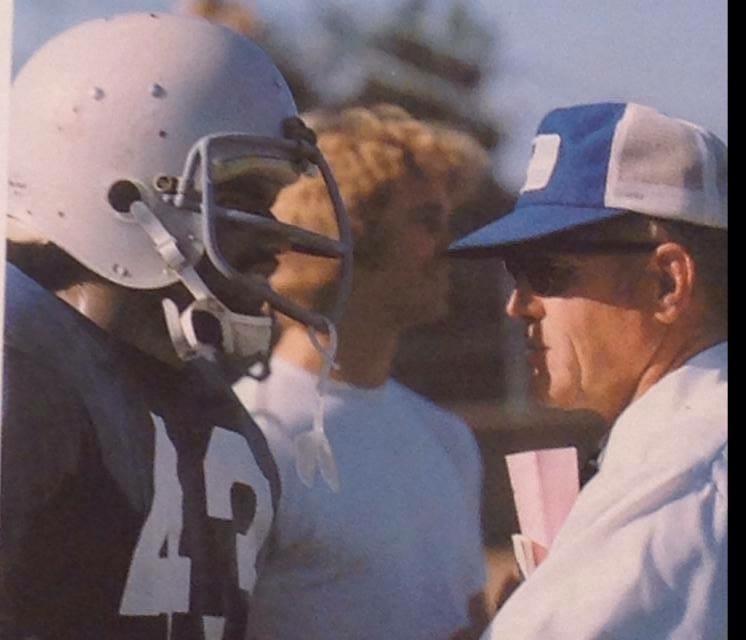 June 2, 2018
As a disrespectful HS student I made the mistake onetime of making fun of coach DeJong before he took the class out for a run. Coach overheard me and took me aside. He took me, alone, into an equipment room, and then in another, still interior, equipment room. I was pretty scared as I figured we were sound proofed and I was in for a beating. When we we got into the interior room Coach asked me if I had been making fun of him. I denied once but when asked again, I admitted that I had. He told me not to ever do it again, I didn't and figured I'd dodged the bullet. Previously, I had thought that Mr. DeJong was a "dumb jock." (If nothing else, I obviously hadn't given much thought to the fact that he was a UCB graduate, something I doubt I could achieve.) I came out of our encounter with a great deal of respect for Mr. DeJong and a pretty funny story. He had put the fear of God into me without lifting a finger or raising his voice. RIP Ray DeJong, thanks for the memory and all the great things you did for us, ungrateful kids.
Chazz Hesselein
June 1, 2018
He was a great coach and loved teacher. He will be missed by all that new him. God bless him and his family.
Dolores Vena Hutchison
June 1, 2018
Sorry for the loss of a Great Man and Coach I know he's drawing up plays right now on the clouds in Heaven as a chalkboard!
Steve Rozzi
June 1, 2018
Ray was a kind gentleman. I was his neighbor in Westwood California for years. I always looked up to him as a second dad. I would visit him even though I am a lot younger but when he would visit Westwood, I would always visit him and just sit and talk to him and he would always tell me stories when he was younger and where he grew up. I will always have a place in my heart for him. I also remember going to a Cal Bears football game and meeting him and him telling me who the players were and what position they played and the play they are doing. I knew his whole family and now when my children mow his lawn in Westwood, it is not gonna be the same without him. His wife, his children, his grandchildren will always be blessed to have such a great person. I love this family and I love knowing I met him.
Dan Valerga
Friend
May 15, 2018
To the family of Ray DeJong. I am so sorry to hear of his passing. He was a big part of my life as a teacher and football coach. The year we won the championship as the only undefeated and unscored upon team was something special. I think coach and I had a special bond because I was born and lived for a time in Westwood Ca.,where coach had his mountain cabin. I'm pretty sure I was the only kid from Westwood to ever play football for South City High. I still have a picture in my den of coach Dejong,Ashby and Warfield with their arms around each other and huge smiles after coming home from beating Westmoor for the championship. I will always have fond memories of Coach DeJong.
Art Gutierrez
May 3, 2018
Thank you Coach, for everything you did. To the friends and family of Coach Ray DeJong, Please accept my most heartfelt sympathies for your loss. My family's thoughts are with all of you during this difficult time.
Steve Benner
April 30, 2018 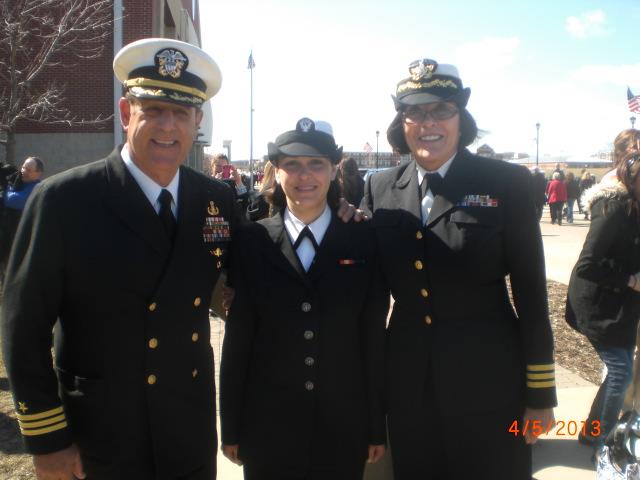 To the "Coach" and his family. It saddens me to hear about the loss of a man who has made an impact on my personal and professional life like no one else has. I spent a 26 years in the United States Navy as a Diving Team Officer. Coach Dejong inspired me to be my best and never quit the USN Diving program no matter how hard the "team" training would get-and there were days I wanted to "ring the bell" and quit-I thought of him telling me never quit-never give up, just like those days playing football at SSFHS. My thoughts and prayers are with him and his family.
My sincerest condolences
Commander James V. DeSimone, USN/Ret.
St. Mary's College of California, 1977
James DeSimone
April 18, 2018
Coach DeJong....I will never, as long as I am on this earth forget him. It took some years but then I realized what he had coached/taught me. I consider it an honor that he knew my name.
Gary Frink
April 17, 2018
May God bless you and your family in this time of sorrow.
Gary Frink
April 17, 2018
Coach Ray was my teacher, my mentor, and my friend
He taught me more than just football.
He taught me about life and how to live in this world,
We never lost as long as we did our best.
We were always a team and he was our leader.
Rich Marquez
SSFHS Class of 1956
My condolences to Coach Ray's family.
My time with Coach Ray will always be one of my greatest memories.
Rich Marquez
Teacher
April 15, 2018
It was always an honor play play against one of Mr. DeJong's SSF football coached teams. One of the toughest, fairest, and talented teams around. I did not know him personally, but heard so many fine comments about him from my friends who were and former SSF players. Condolences to Mr. DeJong's family and friends Rest in peace Mr. DeJong...a game well played.

One of a kind