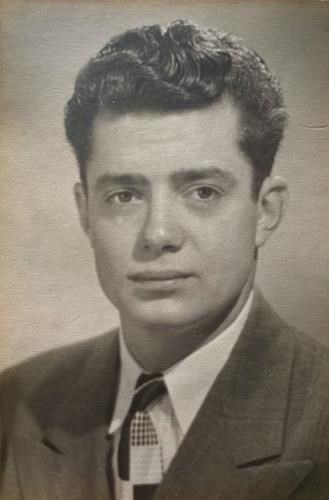 A 63-year resident of San Mateo, passed away March 15, 2019 at age 90 from complications following a stroke.

Rich was born in San Francisco in 1929 to Victor and Olga Ratto and moved to Burlingame as a young child. He was a graduate of the Drew School in San Francisco and the College of San Mateo. A decorated veteran of the Korean War, he entered the plumbing trade after the war and was a proud 64-year member of Plumbers & Steamfitters Union Local 467 where he worked on commercial and industrial plumbing installations throughout San Mateo and Santa Clara counties during his 30-year career.

He married his wife Beverly (B.J.) in 1951 and they enjoyed 54 years of marriage before her passing in 2006. He served as her devoted caregiver during the last years of her life.

Rich had a lifelong fascination with trains and with his brother Don enjoyed building miniature live steam locomotives that they ran on the Golden Gate Live Steamers tracks at Tilden Park in Berkeley, where he was a member. An amateur cartoonist, Rich created "Spike and Rail", a humorous train-themed cartoon panel that ran for many years in the GGLS newsletter.

An original DIY-er, Rich could build or fix almost anything and was always generous with his time, helping out family, friends and neighbors with his skills. He also shared these talents in later years as a volunteer at the San Mateo Senior Center and the San Mateo Public Library. A life-long learner and "news junkie", Rich challenged himself to keep up to date with world affairs, politics and technology and enjoyed using Photoshop on his computer and texting messages, videos and photos to his family and friends into his 89th year. An avid Giants and 49ers fan, who enjoyed gatherings of his large family, Rich's warmth, charm, sense of humor and generosity will be missed.

Rich is survived by his brother Don and his children Jan (Tony), Linda (John), Rick and David. He also leaves grandchildren Jennifer (Justin), Lindsay, Sean, Tim, Hailey and Kylie, and great-grandsons Lucas and Korbin, the newest steam engine fans in the family. He is also survived by step-grandchildren Kelly (Sal), Sean (Rebecca), and Kristin and their families.

A Memorial Mass will be celebrated in his honor on Thursday, April 25th at 10:30am at St. Gregory Catholic Church, 28th & Hacienda Streets, San Mateo. Private inurnment. Contributions in Rich's memory can be made to Sutter Hospice at Sutter Care at Home, Gift Processing Center, P.O. Box 160045, Sacramento, CA 95816.