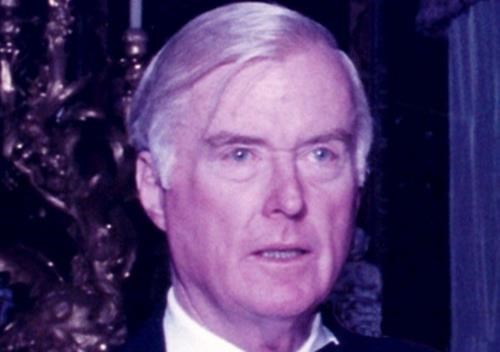 Bill was a brilliant man of letters and linguistic genius who could bend the English language to his will like few others. Avuncular and sweet-natured, possessed of a wry and irreverent wit, fluent in French and Italian, a master of allusion and superb with impressions and accents, he was unexcelled as a raconteur and bard. He was devoted to an astounding variety of literary and intellectual pursuits, peripatetic in his extensive travels, and indefatigable in his commitments to civic and charitable endeavors, particularly to conservation and environmental causes. A noted bibliophile and oenophile, he frequently combined those loves with a third, his great love of music, particularly opera. Bill liked his poets Irish, but his food Italian. He possessed an encyclopedic knowledge of natural history and natural science and loved adventuring in the out of doors with family and friends locally in California, on the Colorado River through the Grand Canyon, in Alaska, Africa and beyond. He was an irrepressible patron of lost causes who almost invariably took up on behalf of the underdog and the "little guy." His empathy and compassion were perpetually on display; it would be foolhardy to try to catalogue his countless initiatives on behalf of the unfortunate, the downtrodden and the wronged, much less his constant individual acts of kindness. It is perhaps best simply to observe that never did someone come to him for help and leave without it.

A wonderful father to his own children and "Papapapap" to his six grandchildren, Bill was also a superb builder and cultivator of family. Be it in Squaw Valley (a central gathering-place for the extended Newsom clan since the 1960 Winter Olympics), at the Monte Vista Inn or his treasured mountain retreat in Dutch Flat, or on any of innumerable family trips, he was never happier than when surrounded by family in conviviality, holding court with a fire roaring, recounting adventures and tales, offering unforgettable impersonations, describing the San Francisco of his (and his father's) youth, quoting Chesterton and Belloc, Yeats and Heaney. Bill adored children and they in turn were drawn to him as to the Pied Piper. He related to them in the most authentic and endearing way, not speaking at them but with them, neither at his level nor theirs, but in some kind of magical blarney in between that riveted them, made them laugh, and yet taught them something at every turn. They left his company-usually holding an armful of books, and some money--knowing he was their ally, including especially in whatever mischief they might be planning with his consent, or perhaps even his connivance. (Bill loved to tweak the establishment, even if that meant the parents of his co-conspirators!).

A fourth-generation San Franciscan, Bill was born into a large Irish Catholic brood in Depression-era San Francisco on February 15, 1934 and raised on Jefferson St. at Baker, in the shadow of the Palace of Fine Arts. He was the second and last surviving of six children (Carole A. Onorato, Belinda B. ("Barbara") Newsom, Brennan J. Newsom, Sharon C. Mohun, Patrick J. Newsom) born to William A. Newsom, Jr. and Christine Newsom. Bill's parents were Mission District Irish. His father, William A. Newsom, Jr., (b. 1902) was a developer and civic leader who survived the 1906 earthquake and was closely associated with the late Gov. Edmund G. ("Pat") Brown. Bill's paternal grandfather, also William A. Newsom, born in San Francisco in 1865, was a contractor and early city father who later became an associate of A.P. Giannini and opened the first branch office of the Bank of America at 29th and Mission Streets in San Francisco. His maternal grandfather (b. 1872) was a longshoreman on the San Francisco waterfront who had made his way from Ireland to San Francisco in the 1880s.

Bill was privileged to have a superb education, first under the tutelage of the good Sisters of St. Joseph of Orange and the French Marists (most of sturdy Breton stock) at Ecole Notre Dame des Victoires, then under the Jesuits at St. Ignatius High School, from which he was graduated in 1951. It was at SI that Bill first encountered many of his boon companions, including Lloyd Fabbri, Lou Felder, Gordon Getty, Paul Getty, Jim Halligan, Chris Malarkey, John Mallen and many more. Bill received his undergraduate degree in French Literature from the University of San Francisco in 1955; a Masters in English Literature from Stanford in 1961; and his law degree from Stanford in 1960.

Bill married the former Tessa Menzies in 1966. They were blessed with the birth of a son, Gavin, in 1967 and a daughter, Hilary, in 1968. While Bill and Tessa were divorced in 1973, they maintained a close, familial relationship for the rest of their lives.

In his professional life, Bill was a Commissioner of the San Francisco Superior Court following law school before entering private practice as an attorney, first with the Lillick firm in San Francisco (1963-1965), then as an associate of the celebrated San Francisco trial attorney, James Martin MacInnis (1965-1966), and finally opening his own private law practice in Tahoe City, CA (1967-1975). He also served as an attorney for Getty Oil Italiana (based in Rome) in the late 1960s. Bill was appointed by Gov. Jerry Brown first to the Placer County Superior Court in 1975, and subsequently to the California Court of Appeals (First Appellate District) in March 1978. He retired from the Court of Appeal in 1995.

Throughout his adult life, Bill served as a legal and business advisor to his great childhood friends, Gordon P. Getty and J. Paul ("Paul") Getty, Jr., and later to many other members of the Getty family. Among other formal roles, he served as Trustee of the Ronald Family Getty Trust from 1988 to 2011; as Trust Administrator for the Gordon Getty Family Trust from 1994 to 2009; and as a Director and President of the Ann and Gordon Getty Foundation from 2011 until his passing. However, his most valuable service was in his informal capacity as a trusted confidant and, first and foremost, a friend. Bill played an important role in the negotiations for the release of Paul Getty's son, J. Paul Getty III, following his kidnapping in 1973.

At one time he considered a career in politics, but Bill lost his first race for the State Senate in 1968. (When asked why he lost, his answer was usually: "Because I ran against the unbeatable Milton Marks.") Despite a later movement to draft him as a mayoral candidate in the early 1980s, Bill had come to see himself in roles outside politics.

Bill's civic and charitable commitments were substantial. He served on the Board of Regents of the University of Santa Clara; the Board of Directors of the International Bioethics Institute, and on the boards of numerous environmental organizations including Earthjustice (San Francisco), Environmental Defense Fund (New York and San Francisco), Friends of the River (Sacramento), Sierra Watch (Nevada City) and the Mountain Lion Foundation (Sacramento). A visionary conservationist from an early age, he was an avid supporter of dozens of individuals and organizations working to protect our public resources - clean air, clean water, biodiversity, wildlife and wild places, especially our forests, rivers, and oceans.

Bill was endowed with great decency and humanity; indeed, these were his defining traits. He took the Golden Rule literally, regarding indignities to others as indignities to himself. A close friend from Bill's youth used to say of him that "the milk of human kindness flows by the quart in every vein."

Sometimes we lose someone whose passing makes it seem like an entire era is washed away. Bill was a proto-San Franciscan who often spoke of a city we sometimes now see only through a gauzy lens, where civic virtue, pride and neighborliness predominated; boasting a vibrant waterfront and teeming with middle class families; led by citizens who, Republican or Democrat, shared many core values; and having colorful characters at every turn. He was certain that he lived in the most magical place possible and, as was said of one of Bill's literary heroes, Belloc, "No man of his time fought so hard for the good things."

He is survived by his beloved children of whom he was so proud, governor-elect Gavin Christopher Newsom and his wife Jennifer Siebel Newsom, and Hilary Callan Newsom and her husband, Geoff Callan; his grandchildren, Talitha and Siena Callan and Montana, Hunter, Brooklynn and Dutch Newsom; his sisters-in-law, Cindy Asner, Cathy Newsom Goodman, Franza Newsom and Anne Scherer; his brother-in-law, Ronald V. Pelosi; a passel of nieces and nephews, grand-nieces and grand-nephews in the Mohun, Fink, Newsom, Onorato, Pelosi and Scherer families; many beloved cousins and relations; and his legion of dear friends, including Gordon and Ann Getty and other, lifelong companions such as Jim Halligan and John Mallen; his longtime personal assistant, Lisa Belforte; and so many others. In addition to his siblings, Bill was predeceased by his former wife, Tessa Newsom.

Private services and burial to be held near Bill's longtime home in the community of Dutch Flat, CA. In lieu of flowers, the family suggests donations to the Justice William Newsom Fund at the San Francisco Foundation (www.justicewilliamnewsomfund.org), which will be used to carry on Bill's legacy of environmental stewardship for generations to come, or to your favorite charity.

When You to Acheron's Ugly Water Come…
Then go before them like a royal ghost
And tread like Egypt or like Carthage crowned;
Because in your Mortality the most
Of all we may inherit has been found-
Children for memory: the Faith for pride.
Good land to leave: and young Love satisfied

Published by San Francisco Chronicle from Dec. 15 to Dec. 23, 2018.
To plant trees in memory, please visit the Sympathy Store.
MEMORIAL EVENTS
To offer your sympathy during this difficult time, you can now have memorial trees planted in a National Forest in memory of your loved one.
Funeral services provided by:
Duggan's Serra Mortuary
MAKE A DONATION
Please consider a donation as requested by the family.
MEMORIES & CONDOLENCES
Sponsored by Duggan's Serra Mortuary.
14 Entries
MAY THE THOUGHT OF KNOWING THAT FAMILY AND FRIENDS SHARE IN YOUR GRIEF BRING YOU A MEASURE OF COMFORT.PLEASE READ PROV 17:17
CKT
December 22, 2018
Bill was my godfather, and a very important part of my life. Spending time with Bill would lighten my heart and sharpen my intellect. Please accept my deepest condolences.
Jane MacInnis Mock
December 18, 2018
From Spirit Bear to Water Ouzel, and the special places they occupy, all God's creatures were in his heart.