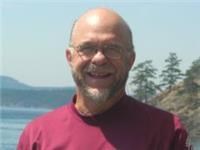 He was born on June 7, 1950 in Philadelphia to Richard Rawson and Constance Kepke Rawson. He grew up in Riverside, Connecticut, sailing on Long Island Sound and swimming competitively. He attended Phillips Academy, Columbia University, the University of Arizona, and the University of Washington where he met his wife, Kathy Thornburgh.

Kit and Kathy were married in 1980 at the UW Marine Laboratories in Friday Harbor where they lived on their wooden sail boat before becoming the first caretakers of the Nature Conservancy's Yellow Island Preserve.

Kit and Kathy moved to Anchorage where Kit worked for the Alaska Department of Fish and Game. Their children, Jacob and Laurel, were born in Alaska. The family enjoyed the Alaskan wilderness by canoeing, picking blueberries, fishing for salmon and hiking in the mountains.

The family moved back to Washington state where, for 30 years, Kit advocated a science-based approach to salmon harvest management in policy, legal, and technical areas representing the Tulalip Tribes and other tribes at the local, state, interstate, and international levels. Kit was a passionate salmon biologist who dedicated his life to promoting the preservation, protection, and recovery of salmon in the Salish Sea.

Even in retirement, his expertise was sought by researchers developing ecosystem models for the Salish Sea, to better understand the factors affecting the declines in early marine survival of Salish Sea salmon and steelhead. His unique and broadminded approach crossed cultures and political boundaries and he sought ways to bring them together.

Kit delighted and excelled in creating and building things: from pasta to pergolas, a cedar shake outhouse on Yellow Island, maps of bicycle routes across Europe and along the east coast of the United States, salmon recovery plans, and loving bonds with his family and new granddaughter.

In 1987 Kit embarked on a decade-long family adventure, designing and constructing a cabin on San Juan Island that will always hold his memory.

Kit was never happier than when on a bike, whether riding to town for groceries or pedaling the length of Great Britain. Kit and Kathy's travels were not limited to bicycles and special trips included travels to China and Ghana to visit their children.

Kit contributed to his community by serving on the board of the SeaDoc Society and the Skagit Land Trust. He was an advocate for bicycle and pedestrian transportation and was a bicycle instructor for the League of American Cyclists. Kit was passionate about his progressive and environmentalist politics and advocated science-based policy.

Kit was preceded in death by his father.

In lieu of flowers, donations may be made to the SeaDoc Society, the Skagit Land Trust, the Billy Frank Jr. Salmon Forever Fund, or Abilis.

Every image of Kit shows him leaning forward, into the photograph, and smiling broadly. Kit was a tireless friend of the salmon, the whales, the Salish Sea, the rivers that feed them and the land that surrounds them. As John Muir did, nearly two centuries ago, Kit loved to climb a mountain and wash his spirit clean.
Published by Skagit Valley Herald from Aug. 18 to Aug. 20, 2017.
To plant trees in memory, please visit the Sympathy Store.
MEMORIAL EVENTS
To offer your sympathy during this difficult time, you can now have memorial trees planted in a National Forest in memory of your loved one.
MAKE A DONATION
MEMORIES & CONDOLENCES
1 Entry
A wonderful human being, husband and father. A sad loss to his family and community. His spirit will live on.
Joe Best
August 19, 2017
Showing 1 - 1 of 1 results