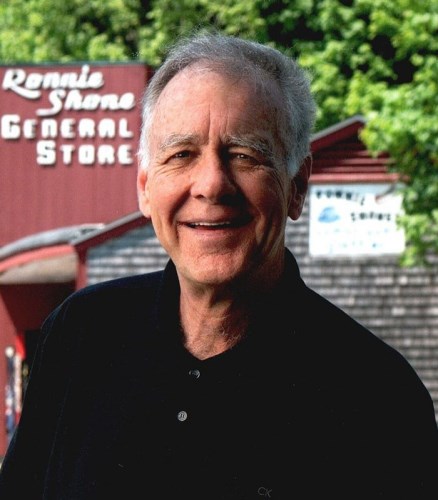 FUNERAL HOME
Richardson-Gaffey Funeral Home
382 First Parish Road
Scituate, MA
Ronald "Ronnie" Hamilton Shone, of Scituate, passed away August 28, 2021, after a long, brave battle with cancer. Ronnie is predeceased by his parents H. Ronald Shone and M. Beverly Shone. He and his brother Robert "Bob" Shone were raised from a very young age in the family business | Ronnie Shone General Store | but still had time for countless adventures and pick-up games. Ronnie graduated from Thayer Academy in 1963 where he was president of his class and a 3 sport athlete. He went on to Bowdoin College, Class of 1967, for whom he played football. He was a proud Marine. Ronnie's first job was setting up library systems for colleges in the US and Canada in a pre-computer age. The death of his father in 1973 brought him back to the store which became his legacy. Survived by his wife Karen Nechtem Shone, his son Brad Shone (wife Jennifer, daughter Sophie), his daughter Robin Shone Hutton (husband Jeff and children Marisa, Molly, Alex), brother Robert Shone (wife Jennifer, children Brint and Tristan and their families); close knit Nechtem in-laws, Judge Amy Nechtem, Todd and Lynne Nechtem and their children and grandchildren. Funeral services will be private. In lieu of flowers donations in his memory may be made to Dana Farber Cancer Institute at www.dana-farber.org Division of Hematology/Oncology. Please consider joining "Be The Match". Ron loved life. His passions included golf, fishing, crossword puzzles, and most of all his grandchildren who called him "Ronnie". His family is comforted knowing he has found peace, and will hit 'em straight. Words of comfort can be left at www.richardsongaffeyfuneralhome.com Richardson-Gaffey 781-545-0196
Published by The Patriot Ledger on Sep. 7, 2021.
To plant trees in memory, please visit the Sympathy Store.
MEMORIAL EVENTS
To offer your sympathy during this difficult time, you can now have memorial trees planted in a National Forest in memory of your loved one.
Funeral services provided by:
Richardson-Gaffey Funeral Home
MAKE A DONATION
MEMORIES & CONDOLENCES
Sponsored by Richardson-Gaffey Funeral Home.
6 Entries
We loved Ronnie and will miss him. We know he´s in a better place.
Steve and Caroline Myers
Friend
September 8, 2021
Karen and Family, I'm so sorry to hear of Ron's passing. He will be sorely missed by all.
Gary Fernquist
September 8, 2021
Mr. Shone, Sir, as a fellow Marine I would just like to say thank you for your service and sacrifice for our Country when you served with the USMC. It was the history and accomplishments made by you and your fellow Marines of the "Old Corps" that all us Marines who followed in your footsteps have always tried to live up to. And to your Family and loved ones, I wish to extend my deepest sympathy. Semper Fi Devil Dog! Mike Casey USMC `85-`89
Mike Casey
September 7, 2021
Offering our deepest condolences during this difficult time.
The Staff of Richardson-Gaffey Funeral Home
September 7, 2021
I am so sad to read about Ronnie's passing. He was one of my favorites! I will never forget His happy smile!
Friend
September 6, 2021
Condolences from the Anthony family. Always a smile from Ronnie. We have many fond memories.
Susan Leigh Anthony
Other
September 5, 2021
Showing 1 - 6 of 6 results