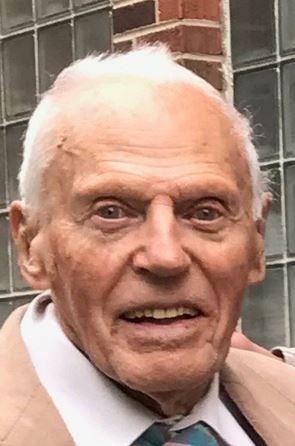 Dr. Bruce C. McIntyre passed away in his sleep on August 25th, 2021 at the age of 100 years and 10 months. He was under the care of Immanuel Skilled Nursing Center and Encompass Hospice, and spent his final day with his son and daughter-in-law at his side. His life of service impacted the healthcare of thousands of patients during his years of practice as a physician and surgeon.

Born in 1920 to Dr. Douglas and Rebecca McIntyre of St. John, WA, he was the youngest of 4 children. Bruce was raised in this small farming community in the Palouse Country south of Spokane. In High School, Bruce and his older brother Don purchased two used dump trucks and formed a trucking company to haul wheat to market for the local farmers. Both boys worked hard at this business every summer and it paid for a majority of their college and medical schooling.

After graduation from St. John High School in 1937, Bruce attended Whitman College for a year and (then) Washington State College for a year on a pre-law track. Don convinced him he was better prepared to be a healthcare provider like him, his father, and his grandfather, so Bruce transferred to the University of Washington to study pre-med. It was there, while he was student teaching a Human Gross Anatomy class, that he met his wife Winogene (the smartest student in the class he'd later say with pride) over a dissected cadaver. The two were married in October of 1943 and had an interesting honeymoon in Olympic National Park when a bear tried to break into their cabin on their wedding night!

After graduation, the couple moved to Washington, DC. Bruce began medical school and Winogene a masters program in Biochemistry at Georgetown University. The war was in full swing and Bruce was drafted to be an Ensign and Naval medical student. But at his induction physical the doctor said "You have a heart murmur", and refused to pass him or to allow him to even get a second opinion. One wonders what this doctor would think today if he knew his patient became a Centenarian!

Upon graduation in 1946, the two were the first couple to graduate from Georgetown with advanced degrees. They remained in D.C. with Bruce doing his internship and residency at Gallinger (later D.C. General) Hospital and Winogene as a Biochemistry professor at the University of Maryland. It was here that the young Dr. McIntyre was exposed to the inner-city poor and destitute, and this experience motivated him to a life of service to the full inclusivity of healthcare offerings to society's most disadvantaged.

In 1948 they moved back to St. John to take over his father's medical practice. Dr. Bruce was the only physician in a large multi-community area, and normally drove daily 48 miles round-trip to the hospital in Colfax. Sometimes twice daily to follow-up on his surgical or critical care patients.

After 11 years of practice, and the new birth of their son, they moved to Whitefish, MT as the town needed another doctor. As the junior doc in practice with Dr. T. L. Lockridge and Dr. J. T. Whelan, Dr. Bruce drove to Eureka 3 times per week to hold clinic and provide healthcare to the furthest reaches of NW Montana. In 1964 he took out a mortgage and started the Whitefish Clinic, one of the forerunners of the current Glacier Peak Medical practice. Life was difficult and busy for a small-town doctor and surgeon in the '60's and '70's. Physicians did hospital rounds twice per day along with regular daily practice. At night and weekends they were subject to house calls, and as this was in the era before cell phones, the business phone was also installed in the house. It was normal procedure for Dr. Bruce to come home at night after a house call only to have to turn around and go back out on another urgent call.

Glacier Park and the northern Blackfeet Reservation needed medical care during the summer, so for many years the Whitefish Clinic staffed and ran 2 clinics staffed by doctors at West Glacier and St. Mary's, and dispensaries staffed by nurses at Lake McDonald, East Glacier Park, and Many Glacier Lodges. This was a logistical challenge, but offered Bruce a few precious opportunities to hike in the mountains and fish the pristine lakes.

Keeping doctors in Whitefish then was always a challenge as the work was exhausting and pay was competitively low vis-à-vis larger cities. Bruce was fortunate to have two dedicated community physicians who were long-time partners, Dr. F. Michael "Mick" Ricker and Dr. Del Coolidge. They also became 2 of his closest friends, along with Charlie and Susan Abell, who was the business manager for the clinic.

From 1961 until the late 1970's, Bruce also served as the Flathead County Health Officer. He was a tireless advocate for community health and safety improvement, as well as advancing women's healthcare and family planning. He was recognized by the Montana Public Health Association for numerous public health improvements he spearheaded and instituted.

In the early '70's Bruce and Winogene got the aviation bug and became light aircraft pilots, a passion they would enjoy many years and serve them well after they sold their Whitefish home in 1979 and moved to Lakeside. While they would fly every other month to Seattle to visit their families, they also flew regularly between the Flathead and Anaconda where Bruce took a semi-retirement job heading the medical care for the state mental hospital and sanitarium at Galen, as well as medical duty at the state prison in Deer Lodge. This was a nice transition into full retirement.

An organization he strongly supported was the American Red Cross where he was the regional director for the northern Rocky Mountain states. Dr. Bruce was also a member of the Burlington Northern Physicians Association, and national president in 1972-73. He served on the board of directors of the Whitefish Chamber of Commerce and was selected by the Winter Carnival to serve as King Ullr VI. He was a long-time active Whitefish Rotarian, Class 1 FAA Medical Examiner, Diplomat on the National Board of Medical Examiners, and Fellow of the American Academy of Family Physicians. He was a member and president of numerous hospital medical staffs, as well as the Professional Education Committees of the American Cancer Society and the American Heart Association. He received the "Bent Prop" award from the Montana Pilot's Association in 1975 for an emergency forced landing without damage to passengers or plane when the propeller left the plane in mid-air.

After retiring, the couple became involved with Friendship Force International and revived the Flathead Valley chapter. This set them off on adventures around the world, and traveling became a wonderful retirement activity. While they loved their Lakeside home, they eventually moved to Village Green in Kalispell for a few years, and then back to Whitefish. They resided at The Springs initially before finally settling on Buffalo Hill Terrace in Kalispell.

Dr. Bruce was an active skier, cross-country skier, and hiker up to his late '80's. He especially enjoyed singing, speaking German, and socializing with a rowdy bridge club that did just about everything in addition to playing bridge. He was a long-time member of Christ Lutheran Church, and a Christian who truly modeled Christ's teachings of servant leadership, humility, patience, and love.

Dr. McIntyre will be remembered fondly by the scores he touched: new mothers he delivered, victims of bear maulings and car accidents he patched back together and saved, terminal cancer patients he helped minimize pain and fear during inevitable transitions, etc. Current doctors remember him at the Kalispell hospital's weekly physician luncheon and lecture programs he attended well into his mid-90's (even though he couldn't always stay awake). His family remembers the fun he had plowing neighbors' roads and driveways with his snowplow equipped Jeep, always whistling while chopping and hauling wood-his favorite exercise, and how he cherished his two grandchildren. He was humble, kind, intelligent, studious, and all of the virtues one sees in a quiet Man of Greatness.

A memorial service will be held when the public health effects of the pandemic become less severe. Friends are encouraged to leave remembrances or condolences at buffalohillfh.com. For those so moved, honorary donations may be given to the American Macular Degeneration Foundation, Planned Parenthood of Montana, or the American Red Cross.
Published by Spokesman-Review on Oct. 17, 2021.
To plant trees in memory, please visit the Sympathy Store.
MEMORIAL EVENTS
To offer your sympathy during this difficult time, you can now have memorial trees planted in a National Forest in memory of your loved one.
MAKE A DONATION
MEMORIES & CONDOLENCES
1 Entry
May your memories of the wonderful times you shared with your loved one comfort you and your family, today and always.
American Heart Association
October 19, 2021
Showing 1 - 1 of 1 results