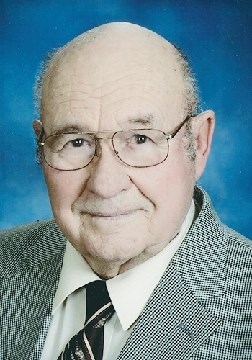 BORN
1927
DIED
2021
FUNERAL HOME
Jones Mortuary
1532 14th St
Mitchell, NE
Walter Edward Helser October 12, 2021 With great sadness, our father, Walter Edward Helser, 94, passed away peacefully on Tuesday, October 12, 2021 at Regional West Medical Center in Scottsbluff, NE. His funeral service will be held 10:00 am on Tuesday, October 19, 2021 at the Federated Church in Mitchell, NE with Reverend Dr. Charles H. Richardson officiating. Interment will follow at the Mitchell Cemetery. Visitation will be 5:00 pm to 7:00 pm on Monday, October 18, 2021 at Jones Mortuary in Mitchell, NE. In lieu of flowers, memorials may be made to the Federated Church or to the Sunflower Historical Society. Online condolences may be left at www.jones-mortuary.com. Jones Mortuary is assisting the family with arrangements. Walt was born April 26, 1927 in Reseda, CA to Thomas Edward and Thelma Etta (Robbins) Helser. At the age of 3 the family moved to the family farm in the Sunflower Community north of Scottsbluff, NE. He attended Sunflower Community School and graduated in 1945. He married Donna Mae Ford on April 28, 1948 and to this union 5 children were born, Linda, Marsha, Cheryl, Steve and Kevin. Walt and Donna together farmed in the Sunflower Community until the mid-1980's. Walt later worked for the Island Cattle Company and Hergert Feed Yard until 2007 and helped his son Steve farm. He loved to take his little red boat out to Lake Minatare and Lake McConaughey to fish and watch the kids ski with the Keeners. Walt and Donna enjoyed going to auctions looking for the perfect antique railroad lantern he could add to his collection along with Donna's butter mold and carnival glass collection. After retirement he became a master craftsman, spending may hours building wooden animal banks, lamps and many other projects he would give away. Walt was a dedicated family man and would help others any way he could. He was a 4-H member and leader along with Jack Henderson and Bill Strey from 1937 to 1961. Walt was a member of the Odd Fellows of Mitchell, a Sunflower High School Bus Driver for 8 years, a longtime member of the Federated Church of Mitchell and was on the Board of Directors at Production Credit Association. He is survived by his daughters Linda (Gary) Lytle of Cerritos, CA, Cheryl Helser-Garcia of Mitchell, NE; sons Steve (Jennifer Hiegel) of Omaha, NE and Kevin of Mitchell, NE; son-in-law Doug Rexus; 8 grandchildren Troy, Terry, April, Melissa, Kristen, Rusty, Misty and Lacey; 18 great grandchildren Aleksey, Drake, Evan, Haylea, Brady, Braxton, Tylii, Tayler, Tanner, Kayleigh, Emily, Audrey, Aiden, Charlette, Finnagan, Caidyn, Autymn, Harmony; great great granddaughters Pyper and Owyn; and sisters Dorothy Henderson and Jeannette Brock. His was preceded in death by his wife Donna; daughter Marsha Rexus; son-in-law Paul Garcia; parents Tom and Thelma Helser; in-laws George and Jesta Ford; sister Mary and brothers Larry, Howard, Jim and Kenny Helser.
Published by The Star-Herald on Oct. 17, 2021.
To plant trees in memory, please visit the Sympathy Store.
MEMORIAL EVENTS
Oct
18
Visitation
5:00p.m. - 7:00p.m.
Jones Mortuary
1532 14th St , Mitchell, NE
Oct
19
Funeral service
10:00a.m.
Federated Church
Mitchell, NE
Funeral services provided by:
Jones Mortuary
MAKE A DONATION
MEMORIES & CONDOLENCES
Sponsored by Jones Mortuary.
2 Entries
Extending deep and heartfelt sympathy to you and your family. Praying God will comfort you and bless the memories your heart holds. With our prayers and sympathy, Jay & Evelyn
Jay & Evelyn Birdsall
October 20, 2021
To all the families of Walt Helser. We were so sad to hear of Walts passing. The Helser family were the first people we met when we moved here 34 years ago. Walt was always asking about our family when I'd see him and was always happy to share about what was going on with his family. He was a hard worker and a kind and gentle man. We were blessed to have known him. May your many memories bring you comfort and peace.
Jackie Detling
Friend
October 19, 2021
Showing 1 - 2 of 2 results