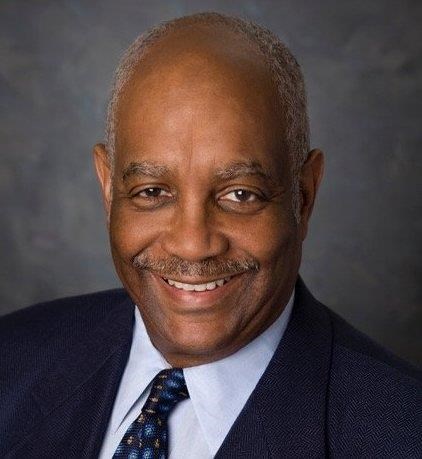 77, transitioned in his sleep on January 8, 2021. He was born on April 18, 1943 to Samuel and Evelyn Hutchinson in St. Louis, Missouri. He graduated from Charles H. Sumner High School where he was later inducted into its Hall of Fame. Sam earned a B.S. in Industrial Engineering from St. Louis University. Sam was also a member of Omega Psi Phi fraternity.

Sam began his professional career as an engineer at Shell Oil Company in Wood River, Illinois. As a Black American male in 1970's corporate America, he found few opportunities for significant advancement. Thus, he took his savings and founded Interface Construction Corporation in 1978. Today, Interface is a multi-award winning full-service general contracting and construction management firm.

Sam was the 2009 National Treasurer of the Associated General Contractors of America and its former Building Division Chair. For years, he served on the holding company board of A.G. Edwards & Sons brokerage firm. While Sam excelled in business, he had a passion for life, family and friends. In 1991, he married the love of his life, Laurna Godwin. He was an avid hunter, skier and fisherman. Growing up, his children, Gerard and Graquel, remember him as the "every dad." He will always be remembered and appreciated for his sage advice.

Sam is survived by his wife Laurna, his children Gerard and Graquel (husband Chris), grandsons Alex and James, sister-in-law Mignon and nieces Jocelyn, Leesa, Jordan and Sienna. He leaves behind numerous cousins, colleagues and friends, particularly his "brother" Ted and "brother-in-law" Michael. Sam was preceded in death by his grandson Shaun and his parents.

Services: A private memorial service and burial is Saturday, January 16 with a Celebration of Life jazz event post COVID-19.

Published by St. Louis Post-Dispatch on Jan. 13, 2021.
To plant trees in memory, please visit the Sympathy Store.
MEMORIAL EVENTS
To offer your sympathy during this difficult time, you can now have memorial trees planted in a National Forest in memory of your loved one.
MAKE A DONATION
MEMORIES & CONDOLENCES
23 Entries
Laurna, I´m so very sorry for your loss. May God comfort you and give you strength.
Ella Clark
March 9, 2021
My his life be of a beautiful memory for years to come. He will be missed at Jazz at the Bistro!
Pamela Dern
March 7, 2021
So sorry to hear the loss of Sam! Have such great memories of building the house on the bluff with you guys! May you find comfort in the days ahead, I´ll be thinking of you Laurna.
Brian Camerer
February 11, 2021
Laurna, we are so very sorry to hear that Sam has passed away. It all seems too soon. Our prayers and condolences go out to you and your family.
Nancy and Larry Gelb
January 23, 2021
Our hearts go out to Laurna during this time. The world has lost quite a spirit, but memories of it will continue for ages.
Cody & Shandelle Brown
January 17, 2021
Our most sincere condolences and prayers are with you Laurna, Gerard and Graquel in the loss of our dear "Sam." He will truly be missed by all who were blessed to know and love him. Much love to you during this difficult time. Your Cousin Yvonne White & Family (Detroit, MI).
Yvonne White
January 16, 2021
Hold tight to memories for comfort, lean on your friends and family for strength, and always remember how much you and Chris are loved. We have spent time with Sam which was a true pleasure. A wonderful man. We love you.
Dale and Sandy Fularczyk
January 16, 2021
Dear Laurna and family~ My deepest sympathies on the loss of this good man. You all are in my thoughts and my heart.
Mary Rogers
January 16, 2021
Laurna, I am so sorry for your loss. You are forever in my prayers. Carol Daniel
Carol Daniel
January 16, 2021
Dear Laurna my sincere sympathy. GOD BLESS YOU
peter driscoll
January 15, 2021
Laurna, So sorry for your loss. My prayers are Cynthia Heath
Cynthia Heath
January 14, 2021
Started kindergarten with Sam. We remained friends thru the years. He will be missed
Marva Clay
January 14, 2021
Sam was a great business partner and I considered him a good friend. We shared many tall stories about our hunting adventures in Wyoming and his stories were always better (and taller) than mine. Gods speed Sam, one of life´s treasures was just to know you. Wojo
Don Wojtkowski
January 14, 2021
I am so sorry, Laurna. Sam was a great guy. Our deepest sympathies to you and your family.
Debbie Douglas and Rick Aselage
January 14, 2021
Our deepest sympathy for the family in the loss of a great person. Mike & Deb Klak
Deb and Mike Klak
January 14, 2021
My sincere sympathy to Sam's family.
I met Sam a just a few times, he always impressed me as a great leader.
The world needs more men like Sam. He will certainly be missed in our industry.
Pat Guichet
Acquaintance
January 14, 2021
Gerard, please know you and your family are in my prayers and thoughts.
Dawn Quinn Farrar
January 14, 2021
So sorry for your loss. Sam was such an amazing person to know. I will always remember him for the smile on his face, his humor and how sweet he was to me. Sending our love to your family
Becca and Ben wald
January 13, 2021
I'm so sorry for your loss, Laurna. My condolences to your extended family. I wish words could do more.
Laurie Waters
January 13, 2021
So sorry. R I P Sam
Woody Zenfell Jr, former Exec. Asst., St Louis Area Construction Users Coun
January 13, 2021
Laurna, I am heartbroken for your loss. Sam was the simply the best of men, with a heart of love, a determination to make a difference, a sense of humor and integrity always. I am so sad that I did not have a chance to tell him how much he meant to me, my birthday twin. He made an indelible mark on my life, my growth, and my heart. Love to you and his family. May his memory forever be a blessing.
Cindy Follman
January 13, 2021
My heart felt sympathy goes out to Sam´s wife and entire family. Bill Wesley from Houston Texas
Bill Wesley
January 13, 2021
Please know you're in our thoughts. So sorry for your deep loss.
Christine Buck Mason
January 13, 2021
Showing 1 - 23 of 23 results