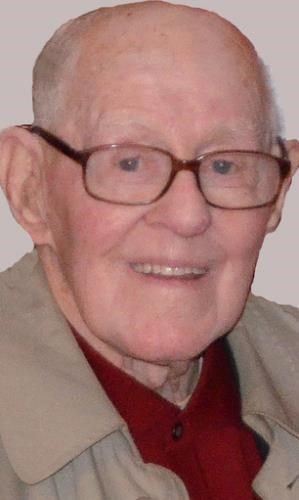 HOLYOKE - Attorney John Gorman McLean, 96, of Holyoke passed away on Friday, April 22, 2016 at Mary's Meadow. He was born in Holyoke, son of the late Hugh and Nellie (Gorman) McLean. John attended Blessed Sacrament Grammar School, graduated from Holyoke High School in 1936, and was a 1940 graduate of the College of The Holy Cross. John served with the United States Marine Corps in the Pacific from 1942 to 1945 attaining the rank of Major. Upon his honorable discharge from the Marines, John continued his education and graduated from Boston College Law School in 1949 and was admitted to the Massachusetts Bar Association the same year. John served as the Assistant to the Registrar of Probate of Hampden County, the Assistant Clerk of Courts in Holyoke and managed his own law practice in Holyoke for many years. John was a member of the Hampden County Bar Association and was a charter member of the Holyoke St. Patrick's Day Parade Committee. John served as President of the former Tri-County Auto Association (AAA), and was a member of the Board of Aldermen for the City of Holyoke. John was an Honorary Coach for the Holy Cross College Men's Basketball Team for many years. During basketball season, "Coach" McLean attended daily practice and traveled extensively with the team to away games and tournaments. John Feinstein, best-selling author of "The Last Amateurs: Playing for Glory and Honor in Division 1 Basketball, wrote of

John's McLean's devotion to the Holy Cross College Crusaders in a lengthy paragraph. In addition to his parents, John was predeceased by his wife, Alice (Bowler) McLean in 1969; his step-siblings, Matthew F. McLean, Hugh D. McLean, Marion Holmes, Elsie Brouillette and a cousin, Louis O. Gorman II. John is survived by two cousins, Mary Elizabeth McDonnell of Reed's Landing in Springfield and Ann Gearon Sears of Bryn Mawr, PA. Additionally John leaves his devoted cousins, Anne C. Gorman (Louis) of Holyoke, Attorney Edmund J. Gorman of Boston (John's Godson), Patricia A. Kuralowicz of Chicopee (Tony), MaryCarol Gorman, of Holyoke and Louis O. Gorman, III of Southampton (MaryEllen), his friend Gail Flanagan and his friends at Mary's Meadow. A special thank you to the wonderful nurses and staff at Mary's Meadow for the loving and compassionate care they provided to John; and to the members of the Sisters of St. Joseph and the members of the Sisters of Providence. A Mass of Christian Burial will be held on Wednesday at 10:00 a.m. in Our Lady of The Cross Church followed by burial in Calvary Cemetery. A calling hour will be held prior to the service from 8:30 to 9:30 a.m. in the Barry J. Farrell Funeral Home, 2049 Northampton Street, Holyoke. In lieu of flowers donations may be made in memory of John to The Sisters of St. Joseph, 577 Carew Street, Springfield, MA 01104 or the charity of one's choice. Ar dheis de go raibh a anam

Published by Worcester Telegram & Gazette from Apr. 25 to Apr. 26, 2016.
To plant trees in memory, please visit the Sympathy Store.
MEMORIAL EVENTS
Apr
27
Service
8:30a.m. - 9:30a.m.
Barry J. Farrell Funeral Home
2049 Northampton St., Holyoke, MA
Apr
27
Service
9:30a.m.
Barry J. Farrell Funeral Home
2049 Northampton St., Holyoke, MA
Apr
27
Mass of Christian Burial
10:00a.m.
Our Lady of the Cross Church
23 Sycamore Street, Holyoke, MA
Apr
27
Burial
Calvary Cemetery
Chicopee, MA
Funeral services provided by:
Barry J. Farrell Funeral Home
MAKE A DONATION
Please consider a donation as requested by the family.
MEMORIES & CONDOLENCES
6 Entries
With love and rememberance of John.
Mary Collamore
Family Friend
April 21, 2017
A great friend of my father and mother and a true Crusader.
Robert Scully
April 26, 2016
Many fond memories of John McLean throughout my life through the eyes of the Gorman Family. Please take comfort in knowing that there is a New Guardian Angle watching over you along with Lou. RIP John
Cathy Gendreau
April 26, 2016
Thank you for serving our country. May your family find comfort in their faith and may you Rest in Peace.
Dr.Timothy Hoffman
April 25, 2016
John was a valued friend and mentor. John will be remembered with both love and admiration.
Evelyn Chesky
April 25, 2016
Thoughts and prayers to you and your family.
Mary Collamore
Friend
April 24, 2016
Showing 1 - 6 of 6 results