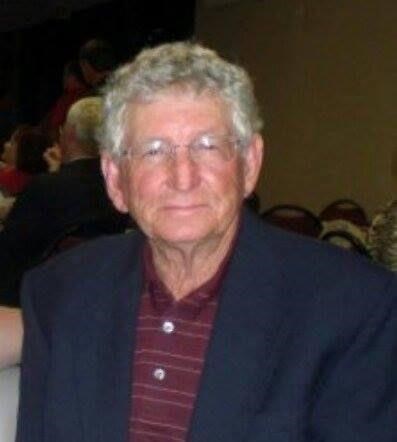 On Nov. 28, 2021, Coach C.D. Taylor (Carmon), age 87, dribbled down the court for the last time and landed his final shot. After battling cancer with amazing grace, bravery and strength, he received the greatest victory as he was greeted by his Heavenly Father with a "Well done my Good and Faithful Servant."

After being raised in Snowball, Arkansas, CD joined the Navy and served proudly in the Korean War on the FDR Roosevelt CVA42. Upon discharge, he graduated with a degree in Education and started his coaching career in Cotter, Arkansas. During his career throughout the state, he formed many successful relationships and left a lasting impact on everyone he worked with.

His passion and integrity to those he loved was unwavering and his infectious laugh and great storytelling will live on forever. He was dedicated and served his church, Central Baptist Church in Little Rock.

He is preceded in death by his father, Carmon Denis Taylor; his mother, Etta Jane Hamilton Taylor; a son, Gary Taylor; his brothers, Jarvis and Vilas Taylor; and a sister, Jewel Turney.

Services will be held at the Roller McNutt Funeral home on Dec. 3. Visitation will be at 9 a.m. and funeral at 10 a.m.

Published by Log Cabin Democrat on Dec. 1, 2021.
To plant trees in memory, please visit the Sympathy Store.
MEMORIAL EVENTS
Dec
3
Visitation
9:00a.m.
Roller-McNutt Funeral Home
650 Central Landing Blvd, Conway, AR
Dec
3
Funeral
10:00a.m.
Roller-McNutt Funeral Home
650 Central Landing Blvd, Conway, AR
Funeral services provided by:
Roller-McNutt Funeral Home
MAKE A DONATION
MEMORIES & CONDOLENCES
Sponsored by TheCabin.net.
3 Entries
Coach Taylor was the best!! I cheered for the Wampus Cats from 1972-1975. I have so many fond memories of those years when our team won many games including the state championship! Coach Taylor was always inspiring Conway students on and off the court to work hard and never give up. I feel blessed to have known him
Charlotte (Jones) Cagnetti
School
December 3, 2021
What a wonderful caring friend he was to me. I will miss him, the talks we had, his stories and just seeing him. The world lost a loving GOD fearing man who loved his many friends.
Steven Bryant
Other
November 30, 2021
When visiting Central Baptist Church, CD always had a smile and a hug and a compliment to make everyone welcome. It's not so often that you find a Christian man without judgements in his heart. CD was that man of God. And he is home with His Father, Abba. I will truly miss him.
Melissa Broomas
November 30, 2021
Showing 1 - 3 of 3 results