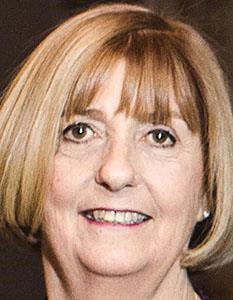 Terry was born in San Francisco, Calif., daughter of the late Henry Ruff of Glastonbury and Kathleen (Dennehy) Ruff of Hartford. She was raised in Hartford, lived in West Hartford for 45 years and enjoyed spending her summers in Old Lyme for 29 years. She graduated from Buckley High School and Central Connecticut State University.

For over 40 years, she held various sales and management positions with The Hartford Courant, The New Britain Herald, The Bristol Press, and most recently, The Day. Terry enjoyed cooking, gardening, spending time at the beach and vacationing in St. Thomas and Punta Cana.

The family would like to thank the nurses and doctors at Yale-New Haven Hospital's Transplant Center as well as the staff at St. Francis Hospital.

In lieu of flowers, the family asks for any donations to be made to the Yale-New Haven Transplant Center.

I have many fond memories of Terry and her brother in grammar school and high school. As neighbors we saw each other almost daily. Please accept my deepest sympathies. Jerry Rucci
November 1, 2016
I was lucky to have worked with Terry during our time together at The Day. Always the professional she put her clients needs first and hearing her talk about her family she obviously put their needs before hers too. We had a fun group that would meet for dinner, lunch or drinks and always laugh the time away. I was lucky to have been included in her life and hope her family knows how very much she loved all of you

She will be missed.
Lynn Faulstick
October 31, 2016
To the Walsh Family, Joan and I are very saddened to hear about Terry's passing. We know that you will all think of her often and remember what a great Mother, wife, and person that she was.