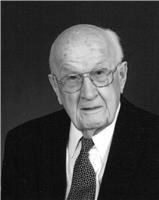 Robert Stanford Kreider died on Dec. 27, 2015 at his home in North Newton, Kansas.

Robert was born January 2, 1919, in Sterling, Illinois, son of Amos and Stella (Shoemaker) Kreider. In 1921, the family moved to Goshen, Indiana, and in 1926 to Bluffton, Ohio. In 1929, Robert was baptized in the First Mennonite Church, Bluffton.

In 1935, the family relocated to Newton and Robert entered Bethel College where he earned a B.A. in History. In 1941, Robert earned an M.A. in Social Ethics from the University of Chicago Divinity School.

As a conscientious objector to war, Robert was drafted into Civilian Public Service (CPS) from 1941 to 1945. His years of service included Assistant Director of the Colorado Springs CPS Camp, Secretary of Education for Mennonite Central Committee (MCC) CPS Camps, and Director of MCC's mental hospital program.

On Dec. 30, 1945, Robert married Lois Sommer in her home church at Pekin, Illinois. Six weeks later, Robert left to direct MCC's relief program in Germany, and one year later, Lois joined him as a relief worker. Returning to the US in 1949, Robert entered a doctoral program at the University of Chicago where he earned a PhD in European History. In 1950, their first child, Ruth Marie, was born and died two days later.

In 1952, Esther was born, and they moved to Bluffton, Ohio where Robert began teaching history at Bluffton College. Over the next ten years Joan, Karen, David and Ruth joined the family. In 1954, Robert became Academic Dean and in 1965, President. He took leave for one year, 1961-62, to establish MCC's Teachers Abroad Program in Africa and Latin America. As President, Robert was particularly interested in innovative programs and in the development of a campus plan that included tree planting and building growth.

After resigning as Bluffton's president in 1972, Robert directed an MCC Self Study, and Robert and Lois spent four months visiting MCC programs in Africa and Asia. In 1975, Robert joined Bethel College (North Newton) as Professor of Peace Studies and Director of the Mennonite Library and Archives, then as Interim Academic Dean. Robert retired in 1985, continuing part time for two years as Administrative Vice President and Director of the Kansas Institute of Peace and Conflict Resolution.

Robert was involved in the work of the church. He served as deacon and Sunday School teacher in his home congregation and as member of the executive committees of the General Conference Mennonite Church Board of Christian Service, MCC, Mennonite World Conference, Kidron Bethel Village, Kauffman Museum, and Mennonite World Review. Other absorbing activities included curation of the Mirror of the Martyrs exhibit and collaborative historical projects such as publication of the Mennonite Experience in America series.

Together with his brother Gerald, Robert established the Marpeck Fund to foster creative collaboration among Mennonite institutions of higher learning in Canada and the US, including Bethel, Bluffton, Goshen, Hesston, Eastern Mennonite, Conrad Grebel, Canadian Mennonite, and Anabaptist Mennonite Biblical Seminary.

Robert's body was donated to Kansas University School of Medicine. Cremation and inurnment will take place at a later date.

In lieu of flowers, the family suggests memorial gifts be designated to Mennonite Central Committee or the Marpeck Fund in care of Faith Mennonite Church, 2100 North Anderson Ave., Newton, KS 67114.
Published by The Kansan on Dec. 30, 2015.
To plant trees in memory, please visit the Sympathy Store.
MEMORIAL EVENTS
To offer your sympathy during this difficult time, you can now have memorial trees planted in a National Forest in memory of your loved one.
MAKE A DONATION
MEMORIES & CONDOLENCES
6 Entries
WITH MCC'S 100TH ANNIVERSARY THIS YEAR, MANY TIMES IN THE CELEBRATION I THOUGHT OF ROBERT AND LOIS KRIEDER AND THEIR IMMENSE CONTRIBUTION TO THE PROGRAMS OF MCC ACROSS THE YEARS. GRACE AND COURAGE, FILLED UP AND POURED OUT BENEFITTING OTHERS - NOTHING BUT GRATITUDE FOR THEIR COURAGE AND GENEROSITY.
GLENN BAUGHMAN
Student
December 24, 2020
How sorry I am to learn of Robert's passing. Having read his My Early Years how I appreciate having crossed through many of the communities he grew up and served in including MCC and Bluffton and his devotion to mental health services earlier in his work life. Gifted, courageous, and thoroughly unafraid of listening to differences. How we will miss his presence!
Glenn Baughman
January 6, 2016
Robert maintained keen curiosity and a great sense of humor right to the end. His life was full of meaning and contributions to others. A life well lived!
Jack and Ruth Scott
January 5, 2016
Robert touched many lives. In a special way he touched the life of C. J. Dyck with whom he worked with refugees in Europe following WWII. Peace of Christ be with you.
Wilma Dyck
December 30, 2015
Kreider Family:

I was stunned today when I opened the Kansan on-line to see that Robert had passed away. There is no one who I respected and admired more than he. In fact, when I was considering leaving an administrative position at the University of Illinois to accept the Presidency at Bethel College, one of the requirements was that I have an opportunity to speak with Robert. Without that conversation, I would not have come to Bethel.

Please know that not only I, but thousands of those who he has touched, will always be grateful for his wisdom and his influence on all who knew him. I treasure a very nice letter I received from him only a few months ago. It's hard to believe that I will no longer receive his occasional notes and comments
John E. Zehr
December 30, 2015
I am saddened to hear of Robert's passing. He certainly played a part in my life during my four years at Bluffton. It was good to get in touch with him again a few years ago. Congratulations Lois, on 70 years together! Amazing! My prayers reach out to you and the "children". You are all in my thoughts.
Ann Conrad/Moore
December 29, 2015
Showing 1 - 6 of 6 results