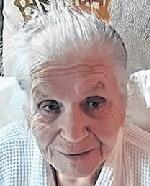 BORN
1931
DIED
2020
Anders, Marie CAIRO It is with profound sadness that we announce the passing of Marie Anders on the morning of December 1, 2020. She succumbed to pneumonia brought about by COVID-19 and passed away peacefully at Columbia Memorial Hospital, in Hudson at 3:45 a.m. at the age of 89. Maire, the daughter of Anton and Elizabeth Richter, is survived by her sister Christine Sommerkorn; and three sons, Karl Schwarzenegger, Ewald Schwarzenegger and Arnold Richter; as well as six grandchildren and eleven great-grandchildren. Marie was born in Krndija, Yugoslavia (present day Croatia) on March 15, 1931, as the second youngest of eight children. She became a refugee and fled to Pichling, Austria in 1945. Her father died when she was 17 and Marie had to give up her dream of becoming a schoolteacher to work at a coal processing factory to help support her mother and youngest sister. While at the factory, she was critically injured in a steam explosion and wasn't thought to recover, but fortunately she did recover and eventually married Karl Schwarzenegger in 1952, her first husband and father to her sons. With the help of her family, Marie, Karl and their two sons, Karl and Ewald, emigrated to the United States in 1955 and lived in the Bronx, where she and her husband were caretakers of the Steuben Beach Club. In 1960, they purchased a small boarding house in West Kill, N.Y., named it Sunshine Valley house, and ran a successful business for many years. She divorced in 1979 and built a new hotel and restaurant in West Kill with the fitting name of Marie's Dream House. This restaurant soon became famous for its fine German American Cuisine and developed a loyal clientele. This was one of her proudest accomplishments. She married her second husband, Fred Anders in 1983. Marie sold the restaurant and her second husband, Fred passed away in 2008. She eventually retired to Cairo, where she resided with her son Karl and his wife Dale for her remaining years. To Marie, family was the center of her life. All of her accomplishments and strivings were towards the goal of family. Growing up during World War II, enduring the hardships that war brings, she looked upon her childhood as one of the happiest times in her life. Her family bonds with her brothers and sisters, mother and father, aunts, uncles, and cousins during those dangerous times, were what gave her strength and continued to sustain her until the end of her life. Her passions were cooking, working in her greenhouse growing her thousands of flowers and of course, gathering the large family together for memorable dinners. The ripples of her life will travel for many years into the future. A private outdoor service will be held in the West Kill Cemetery on Saturday, December 5, at 11 a.m. In lieu of flowers, the family requests that donations be made to your local food bank in her name.

To plant trees in memory, please visit our Sympathy Store.
Published by Albany Times Union on Dec. 4, 2020.
MEMORIAL EVENTS
No memorial events are currently scheduled.
To offer your sympathy during this difficult time, you can now have memorial trees planted in a National Forest in memory of your loved one.
GUEST BOOK
0 Entries
Be the first to post a memory or condolences.