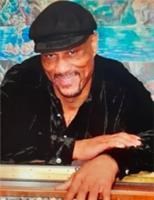 BORN
1952
DIED
2021
(News story) Isaac "Ike" Stubblefield, a Toledo native whose command of the Hammond B3 organ led to a half-century career and performances around the world with household musical names, died June 20 in his Conyers, Ga., home. He was 69.

He had cancer, his sister Brenda Price said.

He lived for more than 20 years in the Atlanta area, where he played with musicians across genres - as he had since his teens. Some thought of him as a mentor, even a big brother, according to a remembrance on ArtsATL, which covers metro Atlanta arts and culture.

A Savannah, Ga., group, the Codetalkers, recorded a song about him, its title the organist's name, with the insistent refrain, "I gotta learn to play like Ike Stubblefield."

In the 21st century's first decade, Mr. Stubblefield produced or recorded his own works and performed as a sideman on more than 20 releases, Doug Swiatecki wrote in his Toledo Jazz Newsletter this week.

Mr. Stubblefield in 2001 played organ on a Martha Reeves album, and in 2012 he played on stage in Atlanta with the Allman Brothers. A 2013 engagement in London with drummer Jimmy Cobb, who played with Miles Davis, earned a favorable review from the Financial Times.

Mr. Stubblefield played keyboards for Eric Clapton, Rod Stewart, Stevie Wonder, Wilson Pickett, George Benson, Iggy Pop, and Tina Turner, he told The Blade in 1997. He'd been a studio engineer for Jimmy Buffett, the Eagles, David Sanborn, and The Who.

"He was so business minded," his sister said. "He wanted to make sure everything was perfect he did, every performance - at a private party or in Germany. He wanted his family to know, 'I'm going here and doing this.'"

This spring, he called Toledo-based singer Ramona Collins about recording with him.

"I've known Ike a long, long time," she said. "He just wanted to be places. He wanted to be able to work and play his organ and record. He was very fixated on the music."

He and his fraternal brother Michael - as they were growing up, "Ike and Mike" - were born June 7, 1952, to Edna and Isaac Stubblefield.

The family was musically inclined, said his sister Brenda, a percussionist. His mother had been a trumpeter in a Chicago jazz ensemble. Cousins included drummer Clyde Stubblefield, who played with James Brown, and singer Ramona Brooks, who recorded and toured with Barry Manilow.

"We grew up with blues and jazz and country, just all kinds of music," sister Brenda said. By his early teens, he was drawn to the Hammond B3 organ's sound and such powerhouse jazz organists as Jimmy Smith and Jack McDuff.

And so he asked his parents for a B3 - a $3,000 investment his mother, sister Brenda, and he discovered upon visiting a downtown music store. His father, who worked at Kaiser Jeep and had a construction business, made sure Ike got the organ.

"My father wanted all of us to be able to do something we loved," sister Brenda said, adding, "Ike was a little headstrong."

When not playing in church, young Ike on occasion would sneak into area clubs to play. He attended Scott High School, but moved to Detroit before graduating. He played keyboards for the Motortown Revue, which was Motown Records' traveling showcase of its talent.

In the following decades, he lived in San Francisco, New York, Los Angeles, Vancouver, and London. He decided in late 1996 to move to Toledo.

He became a regular at Rusty's Jazz Cafe. He had ambitions to start blues, jazz, and rock bands and to organize a songwriters' guild, he said. He mostly wanted to draw on his experience in the business to help Toledo musicians.

"I am amazed by the talent here. ... I know how to put product out. It's all about product, not talent," he told The Blade.

His group, Is Not Was, became the house band of Yikes! Supper Club, which opened in early 2000 on the 19th floor of what was soon to the Hawthorne Hotel & Suites at Summit Street and Jefferson Avenue. He helped book talent, which included Mr. McDuff, his B3 forebear; organist Joey DeFrancesco, and Bill Wharton, a Louisiana guitarist called the "Sauce Boss" for cooking gumbo onstage.

The club was short-lived, however, and by 2001, Mr. Stubblefield moved to Atlanta, drawn by the warm winters and the proximity to New Orleans, his sister said.

Arrangements are by Southern Cremations & Funerals, Marietta, Ga. A musical memorial in Toledo is pending.

This is a news story by Mark Zaborney. Contact him at [email protected].
Published by The Blade on Jul. 2, 2021.
MAKE A DONATION
MEMORIES & CONDOLENCES
2 Entries
We were neighbors many years ago. We still have fond memories of the Stubblefield family. I remember celebrating my birthday at Rusty's Jazz Cafe, and Ike was Performing there that night. He graciously sang a birthday song to me. I will never forget that night. Our love and condolences goes to the family. May God's love surround you at this time. Friends always. Peggy and the Autry Family
The Autry Family
July 2, 2021
To the Stubblefield Family So sorry for your loss. We all grew up together in Toledo, Ohio. May you find comfort in Ike's memory .
Autry Family
July 2, 2021
Showing 1 - 2 of 2 results