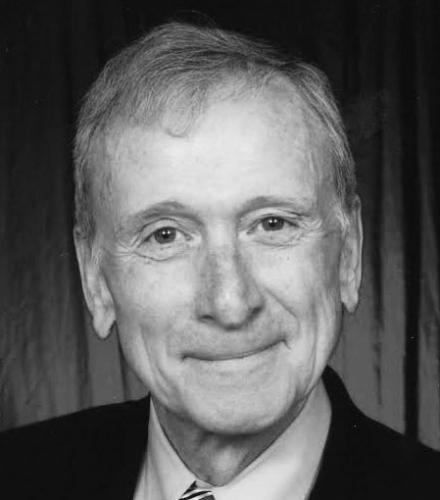 James M. Murray, 69, passed away Saturday, September 5, 2015, at The Toledo Hospital, surrounded by his family. Jim was born July 12, 1946, in Steubenville, Ohio to Martin and Vera J. (Cich) Murray. He graduated from Catholic Central High School in Steubenville and attended Franciscan University of Steubenville. Jim served our country in the United States Army in the Vietnam War. He married Kay Gilchrist on August 30, 1969, in Jefferson County, Ohio and she survives.

In June of 2009, Jim retired after forty years of employment in the electrical power industry. He began his career with Ohio Edison in 1969. In 1997, he was named president of Toledo Edison. At the time of his retirement, he was president of Ohio Operations for First Energy. Through the years, he has served on many boards and committees, most recently Lourdes University and as the current chairman for ProMedica Health System board.

He was a member of Holy Rosary Cathedral and an avid Pittsburgh Steelers fan.

www.witzlershank.com
Published by The Blade on Sep. 7, 2015.
To plant trees in memory, please visit the Sympathy Store.
MEMORIAL EVENTS
To offer your sympathy during this difficult time, you can now have memorial trees planted in a National Forest in memory of your loved one.
Funeral services provided by:
Walker Funeral Home - Witzler Shank Chapel
MAKE A DONATION
MEMORIES & CONDOLENCES
26 Entries
I had the great opportunity to work under Mr. Murray's leadership about 15 years ago. I will always remember him as a true humanitarian with a deep love for people. He always looked for the "good" in people and would never give up if there was a ray of hope. His legacy of business and community service will live on forever.
Theo Foreman
November 30, 2015
KAY and MARTIN

What a great man! We have all been blessed to know him. Jim will be an inspiration for me the rest of my life.

Chris Amato
November 12, 2015
Having just learned of Mr. Murray's passing, I wish to extend my deepest sympathy and prayers to his wife and family. While I was employed at the Port Authority as an administrative assistant, Mr. Murray was always a true gentleman. He treated me and others with the utmost respect, and in spite of anyone's job title or position, he demonstrated that all people have equal worth and value. His light in the world will forever shine.
Angela Bailey
October 29, 2015
A true gentleman with a positive outlook and a smile on his face . . . all of the time. The Murray family is in my prayers.
Dominic Pinciotti
September 16, 2015
Jim is someone you can never forget as he was certainly an upstanding leader in whatever he was involved in. ARC was one of his volunteer efforts and employees and fellow Board members have such great memories of Jim.
Clarence Metzger
September 13, 2015
The world is a lesser place without you in it.
Brian Skidmore
September 11, 2015
Kay and Martin please know that we are praying for you. Jimmy was a special person and always was so warm and friendly. He will be dearly missed.
Alice and John Luse
September 10, 2015
Jim was one of the nicest men I ever met. I feel privileged to have known him. May Jim rest in peace, God has given him the blessing to come into his arms to assure him that everything is (now ok. I pray for his family as they grieve and may they feel comfort in knowing they will be together again someday.
Peggy W
September 9, 2015
"I wish I could take out the reverse gear on all our trucks and we'd avoid accidents and anybody getting hurt - employees would have to drive forward." Maybe an unusual tribute, yet this represents Jim: creative, thoughtful, positive and thinking about how to get it done. Thanks, Jim. And you always were a giver - in the company, in the community, and always making sure your guests left with something. Kay and Martin - you have our sympathy.
Mary Beth Carroll
September 9, 2015
Jim Murray was one of the finest individual I have ever known. Honest,fun,friendly,encouraging,intelligent,and loyal. He was a rare individual who brought shining light with him wherever he went and shared it with all he met. My wife Joy and I truly loved the man and are so saddened to hear of his passing. Our love and sympathy to Kay and the rest of the Murray family. Jamie Farr
Jamie Farr
September 9, 2015
We are so sorry to hear of Jim's death. What a wonderful man!! Will pray with you for the repose of his soul tomorrow at Queen of the Holy Rosary Cathedral. May his spirit be with us always.
Roger & Lillian Peluso
September 9, 2015
Jim Murray exemplified the highest of leadership standards in both his personal and professional life. He was one to seek solutions and correct actions for the future not dwell upon who did what in the past. His compassion for others, ready wit and positive can do attitude earned the admiration and loyalty of the people of Toledo. He will be sorely missed.

Kay and Martin, you are in our thoughts and prayers.
Lee and Terri Dunn
September 9, 2015
I am deeply saddened to hear of the passing of Jim. He was such a wonderful man and will be sorely missed by all who knew him. Jim was a true servant leader as he took such pride in the coworkers he led and as he served on many community boards and committees. He was well known by everyone by his warm smile and his kind and gentle nature.
I know that I am blessed to have had the opportunity to know Jim and a much richer person for the experience.
Kay and Martin my deepest sympathy and prayers are with you and your family during this difficult time and may you find comfort in the love and concern that surrounds you today and in the days ahead. May God bless you both and all your family during this time of sadness and grief.
Terri McLain
September 9, 2015
I am so sorry to hear that Jim has passed away.I went to high school with Jim, and he was clearly one of the most beloved members of our class. He was friendly to everyone. I was so happy to see Jim last summer at our 50th reunion. Even though he had risen to the highest level in his profession, he was the same humble person that I knew in high school. Jim, may you rest in peace. You will be sorely missed.

Eric France
September 8, 2015
Jim Murray will be missed as a friend, a trusted colleague and respected leader in this community.

We served on several boards and were close associates in a number of community organizations and ecomomic development projects.

His integrity, generostiy...his easy yet persuasive style created a positive and collegial atmosphere within any organization in which he was involved.
His presence and leadership always added value in social circles, business endeavors or community initiatives.

Definately, one of the good ones. Wish there were more like him.

Mitchell Family
Gilda Mitchell
September 8, 2015
Sorry to hear about Jim's passing. He will be missed by his Toledo Edison family. Prays go out to the Murray family.
Vickie Yoder
September 8, 2015
My sincere condolences to the Murray family on Jim's passing. Jim was a devoted leader in the community and will be missed. RIP Jim Murray.
Bob Pinkston
September 7, 2015
I am so sorry to hear about Jim Murray's passing. I worked in Customer Service downtown Toledo for many years and I remember most about Jim was that he cared so much about people; always smiling and offering his help. He was a wonderful man to work for. My prayers are with his family and friends. God bless.
Donna Schaefer
September 7, 2015
I am so very sorry to hear of Mr. Murray's passing. I stepped into an elevator at Edison Plaza shortly after he arrived at Toledo Edison and he immediately thrust his hand forward and introduced himself. He was one of the most personable people I ever met and the best president Toledo Edison ever had in the 32 years I worked there. I missed him when he retired and the area certainly misses him. May God heal your family and may you take comfort in knowing how very many people liked him and the job he did.
Keith Steele
September 7, 2015
Kay, Jim was truly one of a kind. I don't think a day ever went by without him smiling and saying something nice to everyone he met.
David Luff
September 7, 2015
Kay and Martin:
So sad to hear of Jim's passing. His legacy is imprinted on every person he met. He was one-of-a-kind and will be forever remembered by those who loved him. It is difficult to find the words to express our sincerest sympathy for your loss. We have no memory of Jim that does not include his wonderful smile and will miss him dearly.
May God comfort you during your sorrow by your wonderful memories of a man cherished by so many, and we are so fortunate to be included in this group.
Mike and Renisa
September 7, 2015
Kay, Jim was among the kindest men I have ever known.He was truly one of a kind.I am so very sorry for your loss.Jim left an indelible impression on all who met him.If you met him once, or if you knew him for years,he always had the soft smile,a kind word and a gentle way about him.He was someone you could not forget.
My heart aches at the thought of your loss. May his gentle soul surround you with comfort in these most difficult times and your many memories of Jim help sustain you.Good night Jim.Rest in peace.
Linda Mansour
September 7, 2015
Showing 1 - 26 of 26 results