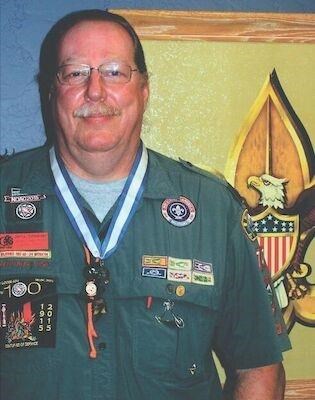 Gerald "Jerry" Schneider 63, born in Jackson, Michigan passed away suddenly on May 30, 2021 from a brain aneurysm. He leaves behind his brother, Kevin; his wife, Sheri; six of his children, Aaron, Mike, Annelyse, Ty, Kyle, Ryan and six grandchildren.

Jerry believed in God, Family, and Country and served each with love and understanding his entire adult life. Jerry was a great husband, father, mentor and gentleman. He freely gave his time and love to family and community. Jerry was always doing something involving family, scouting, or helping others including our furry friends.

Scouting was one of his passions. He joined scouts as a boy and continued until he turned 18 after receiving his Eagle. As an adult he became an avid scouter supporting his boys in 2006. He was not just a scout leader he was a mentor. He worked hard to help the young men and women achieve scouting goals and grow into intelligent and hard working men and women. He was a master mechanic who could fix anything and solve most problems. Once up at Camp Lawton, the volunteers were struggling to fit a ten foot board on the saw to cut it down to eight feet. Jerry wisely turned the board so that the cuts were done at the two foot mark instead of the 8 foot mark making the boards more manageable and the cutting safer. He called it his red neck problem solving skills.

He tells the story of one young man who needed to finish his scout master conference before he turned 18. At 11:30 p.m. the night before the young man turned 18, there was Jerry asking the final questions for the scoutmaster review. That young man and many more young people have achieved the rank of Eagle and beyond all because of Jerry and his commitment to excellence.

Over the past 15 years, Jerry has worked with the Catalina Council Boy Scouts Troops 129, 739 and 747 and Crew 747. Jerry loved working for the Catalina Council and did everything from computer repairs, Assistant ScoutMaster, Assistant Crew Advisor, Crew Advisor, Merit Badge counselor, District Committe member, archery and ATV instructor and took the extra training to teach new instructors. He had just recently became Charter Organization representative for Pack and Troop 747. Jerry was also a member of the Order of the Arrow. He worked with Papago Lodge 494, first as a member, then Chapter Advisor, then Lodge Advisor and was an Assistant Section Advisor when he passed. Another program he was passionate about was with Pimaree partnership between BSA and Mexico's scout progam.

Jerry worked in the Tech field for the last 25 years. He worked primarly in Qualtity Assurance and Network Adminstration. He loved his work and always would tell people that he got paid to break things.

The family is not planning a ceremony at this time, If you wish to honor Jerry's memory please feel free to make a donation to Ferret Friends, Inc or to the Catalina Council Scout office. Jerry will always be remembered in our hearts. Arrangements by EAST LAWN PALMS MORTUARY.


Published by Arizona Daily Star on Jun. 10, 2021.
To plant trees in memory, please visit the Sympathy Store.
MEMORIAL EVENTS
To offer your sympathy during this difficult time, you can now have memorial trees planted in a National Forest in memory of your loved one.
Funeral services provided by:
East Lawn Palms Mortuary
MAKE A DONATION
MEMORIES & CONDOLENCES
3 Entries
Many decades ago Jerry and I discovered we shared the same birthday and have been friends ever since. It has been a friendship that lasted for over 30 years. Jerry was always generous with his time, wisdom, and challenged others to be better. His dedication to the Scouts is just one example. I will miss you Jerry. Thank you for always being there for me.
Andy Edmonds
June 12, 2021
Jerry was an amazing, one-of-a-kind man. I am and always will be grateful to him for his friendship and mentorship over the last many years. He was dedicated to inspiring others to grow themselves personally, and to making things better than they were previously. The world is a better place for him having been here.
Dennis Dahler
Work
June 11, 2021
Softly falls the light of day, as our campfire fades away. Silently each Scout should ask, have I´ve done my daily task? Have I kept my honor bright, can I guiltless sleep tonight, have I done and have I dared, everything to be prepared? Jerry always did his task, he always kept his honor bright and he was always prepared. RIP my brother, you will be missed by many!
Craig Zimmermann
Friend
June 11, 2021
Showing 1 - 3 of 3 results