Col. BERTRAM ARTHUR MAAS,  USMC (Ret.) (Age 79)
Colonel Bertram Arthur Maas USMC (Ret.) passed away on Saturday, May 28, 2011 of lung cancer. Bert was born on June 14, 1931 to Lt. Col. Arthur B. Maas and wife Charlotte in Omaha, Nebraska. Raised in St. Paul, Minnesota, he graduated from St. Thomas Military Academy and attended the United States Naval Academy graduating in 1953 and becoming a 2nd Lt. in the U.S. Marine Corp. Two years after meeting on a train coming from Chicago, he married Charlotte Ann Hiser of Bethesda, Maryland on June 9, 1953. They became the parents of six sons, John (Wendy), Michael, Curtiss (D.), Charles, Stephen, and Brad. Bert was also the proud grandpops of John Henry, Jennifer, Bryan, Jessica, and Nicholas Maas. He also leaves behind his beloved sister Jean Schiefelbein of Eden Prairie, MN and many nieces and nephews.  Following flight training at Pensacola, FL, and Corpus Christi, TX, Bert became a fighter pilot. He attended the US Naval Post graduate School Monterey, CA and the Industrial College of the Armed Forces. He later transitioned into helicopters and one of his career highlights was a tour in HMX-1, flying Presidents Eisenhower and Kennedy. He commanded gunships squadron VMO-6 in Vietnam for which he received the bronze and silver stars. Bert's final three years on active duty in the Marine Corp. was as the CO of Marine Aircraft Group 49 at Willow Grove, PA flying A4's and CH53s. After retirement Bert enrolled in George Mason School of Law and was admitted to the bar in 1986. He enjoyed boating and spending time at his beach cottage in Emerald Isle, NC, with his family. He and wife Charlotte were married for 57 years and were residents of Vienna, VA for over forty years.  Relative and friends are invited to Bert's Life Celebration at Money and King Funeral Home, 171 W. Maple Ave., Vienna, VA on Thursday, June 2, 2011 from 2 to 4 and 6 to 8 p.m. A funeral service will be held at a later date in Fort Myer Old Post chapel immediately following will be interment in Arlington National Cemetery.

To plant trees in memory, please visit our Sympathy Store.
Published by The Washington Post on Jun. 1, 2011.
MEMORIAL EVENTS
No memorial events are currently scheduled.
To offer your sympathy during this difficult time, you can now have memorial trees planted in a National Forest in memory of your loved one.
MAKE A DONATION
MEMORIES & CONDOLENCES
3 Entries
Margie and I send our deepest sympathy to you, Charlotte, and family learning of Bert's passing on to his Heavenly Home where he will be welcomed by God and many Saints, relatives and friends!
We will miss him greatly, but remember the good times we had together! He will always be the great Marine Corps Warrier that I always thought would become the Commandant! His flying skills earned him the Silver Cross and many other honors that he deserved but never received. He will be missed by many Marines but also those of us who were with him in High School at St.Thomas Military Academy. Our 1949 Yearbook called me "Bert's Bosum Buddy"! We
did a lot together, sports {pole vaulting}, social (parties, dancing,sipping}, thrilling the girls at Visitation Academy, St. Joe's, Derehm Hall,...etc. Though I'll never forget the beartiful girl he brought in from Bethesda, MD and the snowy Hay Ride in North Oaks, St. Paul - of course that was Charlotte who spent 57 years married to Bert! We'll all miss him, of course, but we'll also remember the times
we were blessed to spend together!!! Dave Mcgovern (Member of
the Wedding)
June 2, 2011
Dear Jeanie,
I had no idea you had USMC memories from your dad as well as your brother. What an illustrious career your brother had and I am sure you dad did as well. We are all grateful for and honor their service. My heart and prayers are with you and your dear family at this difficult time. Brothers are special.
God bless and much love,
Mary Ann Doetzer
June 2, 2011 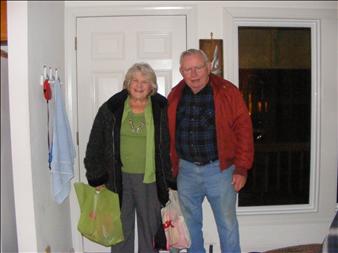