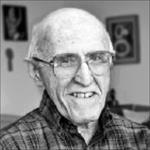 FUNERAL HOME
Hines-Rinaldi Funeral Home
11800 NEW HAMPSHIRE AVE
Silver Spring, MD
David S. Davidson
Former chief judge of the National Labor Relations Board and former board chair of both Mobile Med and the Commission on Social Action of Reform Judaism, passed away on February 17, 2019. Davidson, of North Bethesda, was born on April 24, 1927. A native of Springfield, Massachusetts, Davidson served in the Navy during World War II. He graduated from Yale College in 1948 and Yale Law School in 1951. As a Yale undergraduate, he was elected to Phi Beta Kappa. Davidson joined the National Labor Relations Board as an attorney in 1952, where he eventually became an administrative law judge. A fierce advocate for social justice, Davidson held, in addition to his service as chair, leadership positions at the Religious Action Center of Reform Judaism and Mobile Med, which provides health care to low-income residents of Montgomery County. In 2005, friends of Davidson and his late wife, Dorothy Mulitz Davidson, created a scholarship fund in their name to help students interested in public service pay for college. Davidson, 91, was loved by many friends and family, who cherished his wisdom, compassion and commitment to always helping others. He will be sorely missed. Davidson was predeceased by his first wife Judge Rita Davidson, the first woman appointed to the Maryland Court of Appeals; second wife Dorothy Davidson; and daughter Minna Davidson. He is survived by his son Leo Davidson; son-in-law Craig Ludwig; step daughter Toni Cortellessa; grandchildren Rachel Ludwig, Melissa Ludwig, Eric Cortellessa and Lauren Cortellessa. A funeral service will be held at Temple Emanuel in Kensington, Maryland, on Tuesday, February 19 at 11 a.m. Davidson's family will sit shiva in the Party Room at the Whitley Park Condos at 5450 Whitley Park Terrace, Bethesda, MD 20814, on Tuesday and Wednesday at 7 p.m., and Temple Emanuel on Thursday at 7 p.m. Contributions can be made to Mobile Med, the David and Dorothy Multiz Davidson Endowed Scholarship Fund at Montgomery College, or Temple Emanuel.
Published by The Washington Post on Feb. 19, 2019.
To plant trees in memory, please visit the Sympathy Store.
MEMORIAL EVENTS
To offer your sympathy during this difficult time, you can now have memorial trees planted in a National Forest in memory of your loved one.
Funeral services provided by:
Hines-Rinaldi Funeral Home
MAKE A DONATION
MEMORIES & CONDOLENCES
9 Entries
My condolences to Dave's family. His blend of kindness, focused intelligence, and determination illustrated and taught how to do better while being better.
(My experiences with Dave were at CSA meetings.)
May his memory be for a blessing.
Asher Sheppard
March 13, 2019
His death is a great loss. I had the pleasure of sharing with him in Reform Jewish work. He was wise and skilled and always the wisdom and talent came with a warmth and a smile.
Rabbi Harry Danziger
February 25, 2019
My condolences to his family. I enjoyed his wisdom and humor during Torah Study.
Gilbert Lavine
February 24, 2019
My deepest condolences to the Davidson family from the Ifshin family. Both Dave and Dorothy were so close to my parents, Shirley and Hal Ifshin. I had the privilege of speaking with Dave a few months ago and he shared wonderful stories of his days as President of Temple Emanuel when my mother was his Vice President. May his memory be for a blessing.
Vicki Ifshin Zell
February 21, 2019
My deepest condolences to the family and all those close to David. He was a most remarkable man, always honest and genuine. His deeds truly impacted and touched so many.
Barbara Clark
February 20, 2019
My condolences to Rachel, Melissa, Craig and Leo. Please accept my heartfelt sympathy on the loss of your loved one from my family in Paraguay . Keeping you in our prayers!!
Zaida A Barrios Mulitz
February 20, 2019
Zaida Mulitz
Friend
February 20, 2019
Sincere condolences to the family of David Davidson. May you be comforted in knowing that our Heavenly Father cares for you. He will give you strength to cope with the loss of your loved one. Psalm 94:17-19
N. S.
February 19, 2019
My condolences to the family. May cherished memories warm your hearts. The blessing of having your loved one live a long and full life is a joy. May the promise of God sustain you. Isaiah 61:1,2
W I
February 19, 2019
Showing 1 - 9 of 9 results