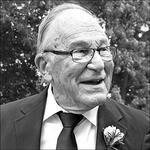 BORN
1922
DIED
2019
CERNY Karl H. Cerny (Age 97) Passed away on November 11, 2019 in Arlington, VA. Karl was born in New York, New York on November 9, 1922 to Karl and Martha Cerny. He was a member of the Princeton Class of '44. For his M.A. and Ph.D, he attended Yale University (1948 and 1955), and acquired a Certificate in European Studies from the University of the Sorbonne in May, 1946. Karl had a fruitful career at Georgetown University from 1950 to 2019. While at Georgetown, some of his academic positions included: Professor Emeritus (1993--); Full Professor (1965-1993); Associate Professor (1957-65); Assistant Professor (1952-57); and Instructor (1950-52). Major teaching and research areas included: German politics and federalism; The European Communities (European Union), and NATO. Karl was involved in many activities, in various positions, while at Georgetown, such as: President of the Association of Main Campus Retired Faculty (2006-2008); Member of the Executive Committee for the National Security Studies Program (1995-1999); Member of the Executive Committee for the Center for German and European Studies (1990-1999); Director of the West European Studies Certificate (1988-1993); Chairman of the Department of Government (1964-71 and 1977-1983); and Chairman for the Committee on Studies in German Public and International Affairs (1974-83). Other positions Karl held included: Book Review Editor for the Conference Group on German Politics (1995-1998); Executive Director of Pi Sigma Alpha National Political Science Honorary Society (1991-93); Resident Scholar for the Central Intelligence Agency (1989-90); member of the Research Council for the American Institute for Contemporary German Studies (1986-1990); President of Pi Sigma Alpha (1982-86); Adjunct Scholar for the American Enterprise Institute for Public Policy Research (1981-86); Research Principal for the Center for Strategic and International Studies (1963-74); Consultant for the Bureau of External Research of the Department of State (1964-69); and Fulbright Lecturer at the University of Nijmegen in The Netherlands (1958-59). He was a member of Phi Beta Kappa, Pi Sigma Alpha, the American Political Science Association, the German Studies Association, and the European Union Studies Association. A prolific publisher, Karl served as editor for Scandinavia at the Polls: Recent Political Trends in Denmark, Norway, and Sweden (Washington, DC: American Enterprise Institute, 1977); and Germany at the Polls: The Bundestag Election of 1976 (Washington, DC., American Enterprise Institute, 1978). He served as editor and contributor for Germany at the Polls: The Bundestag Elections of the 1980s (Durham, NC: Duke University Press, 1990); "The Future Role of a United Germany in the European Community," edited by Gary Geipel; and Germany in a New Era (Indianapolis, Indiana: The Hudson Institute, 1993). He is survived by his sons, Karl, John, Tim, daughter, Mary, and grandchildren. He was preceded in death by his wife, Constance Lark Cerny. Date and time of services will be determined at a later date. Those interested in future service information may sign up for updates at: https://www.dignitymemorial.com/obituaries/arlington-va/karl-cerny-8922757. The family would like to give special thanks to Capital Caring and Paula for their service.The family would like to give special thanks to Capital Caring and Paula for their service.
Published by The Washington Post on Nov. 15, 2019.
To plant trees in memory, please visit the Sympathy Store.
MEMORIAL EVENTS
To offer your sympathy during this difficult time, you can now have memorial trees planted in a National Forest in memory of your loved one.
MAKE A DONATION
MEMORIES & CONDOLENCES
4 Entries
Prof. Cerny was one of my heroes. Of course I knew of the family from my days at O'Connell High School 1964 to 1968 but our friendship began when I started to work in the GU Registrar's Office in 1973. Karl was always a gentleman and he epitomized what it means to be a scholar-teacher. I always admired him for those qualities and for all the many things he did for Georgetown University. May God bless and console all in the Cerny family. And may Karl have eternal rest.
John Q. Pierce
November 19, 2019
Karl was a tower of strength within the Government Department and Georgetown University at large. He left a great legacy of which current and future students are the fortunate beneficiaries.
Peter Krogh
November 18, 2019
I fondly recall Dr. Cerny's government class when I was a freshman at Georgetown many years ago. He was one of the best professors I had there and a real gentleman. I'm glad to know he had a long life. May he rest in peace.
Ellen Lyon
November 15, 2019
My deepest sympathy to the family of Karl Cerny. May you be comforted in knowing that our Heavenly Father cares for you. He will give you strength and courage to cope with your grief. Psalm 94:17-19
N. S.
November 15, 2019
Showing 1 - 4 of 4 results