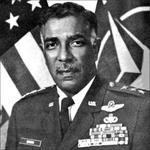 BORN
1927
DIED
2020
FUNERAL HOME
Adams-Green Funeral Home
721 Elden Street
Herndon, VA
BROWN Lt. General William Earl Brown, Jr. (Age 92) Passed away on June 4, 2020 in Potomac Falls, VA. He was born on December 5, 1927, in The Bronx, NY, to William E. Brown, Sr. and Rose David Brown. Earl attended Penn State University, graduating with a Bachelor of Science degree in 1949. Planning to go to medical school, he found employment at Harlem Hospital. While working at Harlem Hospital, he met Gloria Henry and they were married in 1954. Earl joined the Air Force and was commissioned in 1951, after pilot training. From 1952 to 1970, he served in fighter aircraft squadrons and staff billets. He flew the F86 Sabre Jet on 125 combat missions in Korea in the mid '50s, and another 100 in the F4 Phantom II Jet from Thailand in '66 and '69, during the Vietnam conflict. His later assignments comprise an impressive list of command tours and staff positions of increasing importance with Air Force units and Air Force bases headquartered in the U.S. and Europe. In most, Earl was the first officer of color to be promoted to those assignments. He assumed command of the 17th Air Force in Germany in 1980, was promoted to lieutenant general in 1982, and became Commander of Allied Air Forces Southern Europe and Deputy Commander-in-Chief U.S. Air Forces in Europe, for the Southern Area, headquartered in Naples. He retired from active duty in 1984. Earl was a command pilot with more than 5,100 flying hours. His military decorations and awards include the Distinguished Service Medal, Legion of Merit with two oak leaf clusters, Distinguished Flying Cross with oak leaf cluster, Air Medal with four oak leaf clusters, Air Force Commendation Medal with oak leaf cluster and Purple Heart. His noteworthy postgraduate credentials include systems management study at the University of Southern California, the Harvard Business School's advanced management program, the Armed Forces Staff College, and the Industrial College of the Armed Forces. In 1981, he received a Distinguished Alumni Award from Penn State, the University's highest order of recognition given by the university. After retiring, Earl consulted for a few years, then spent 15 years as a ski instructor at Ski Liberty, near Gettysburg. Skiing was his greatest passion surpassed only by his love of flying. The entire Brown family are avid skiers. He also had great love for chess and music, and in his earlier years he often played guitar for his friends and family. Earl is survived by his loving wife of 66 years, Gloria; also, daughter, Nancy Turner and her husband, son-in-law, Tim Turner, his son, Lou Brown, and son, Bill Brown; also, grand-daughter, Ally Turner, and grandson's, Logan Turner and Cody Turner. As well, his sister, Joyce Fannin of Teaneck, NJ, and many more nephews, nieces and cousins from the Fannin Family of Teaneck, NJ, the Henry Family of Plainfield, NJ and the Brown Family of Bloomfield, NJ. Services will be at Arlington National Cemetery when scheduled. Updated service information and condolences at www.adamsgreen.com. www.adamsgreen.com.
Published by The Washington Post on Jun. 12, 2020.
To plant trees in memory, please visit the Sympathy Store.
MEMORIAL EVENTS
To offer your sympathy during this difficult time, you can now have memorial trees planted in a National Forest in memory of your loved one.
Funeral services provided by:
Adams-Green Funeral Home
MAKE A DONATION
MEMORIES & CONDOLENCES
4 Entries
He. Was an outstanding. Person
Who. Was. Loved. By. All. His. Men.
We. Miss. Him. Every. Day.one word
To sum up. His. Life ( wonderful )
Larry. Boyd. Smsgt usaf ret
Served In Military Together
October 12, 2020
General Brown was a distinguished American who was always an inspiration to our family. We are sad that he is gone but will always be thankful for our fond memories of the times we spent together. We wish we could have a copy of his music collection, thats for sure! It was more than impressive!
Peace be with all of his loved ones during their days of sorrow.
We send our sympathy with heavy hearts and a final salute to General Brown.
Always, Angela and Ike
The Eichenbrenner Family
Friend
June 26, 2020
Inspiring Cousin, General Earl Brown was very calm and pleasant human being. He was a joy to speak to, and to work with in family reunion matters. My condolences to his wife and children. Peace and blessings.
Alan D. Gillian Sr.
Family
June 24, 2020
My deepest sympathy to the family of William Earl Brown Jr. May you be comforted in knowing that our Heavenly Father cares for you. He will give you strength and courage to cope with your grief.
Psalm 94:17-19
N. Persaud
Neighbor
June 12, 2020
Showing 1 - 4 of 4 results