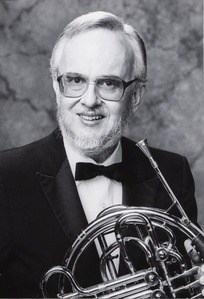 Fredrick Charles Bergstone, of Winston-Salem, NC, who was widely known for many years as a beloved horn teacher at the North Carolina School of the Arts and the Principal French Horn in the Winston-Salem Symphony, passed away suddenly on Thursday, January 14, 2021, from non-COVID medical issues. Affectionately known by many students as "Mr. B." and as "Fred" by the hundreds of musicians he performed with, he was revered not only for his superb musicianship, but also for his wicked, dry sense of humor and quick-witted puns. He was born December 8, 1935, to Charles and Marie Bergstone in Detroit, MI. but soon moved and grew up in Long Beach, CA. He attended the nearby University of Southern California as a Music Education major, and served as a librarian for the USC Marching Band. Upon graduation he served in the U.S. Army band, then returned to Northern California where he married Pauline (Polly) Foster and they had a son, David. After a brief time teaching elementary music classes and playing in the Monterey Symphony, he was admitted to The Juilliard School for graduate school, where he studied with James Chambers and played in such well-known orchestras as the NY Philharmonic, NY City Opera, and the Pittsburgh Symphony. In 1964, Fred took the position of Principal Horn in the Kansas City Philharmonic and taught at the Music Conservatory at University of Missouri, Kansas City. After Fred and Polly had moved to Kansas City, MO, their daughter, Ellen was born in 1965. That same year he became a member of the renowned Clarion Wind Quintet, and moved with them to Winston-Salem, NC, to become founding faculty members at the newly-formed North Carolina School of the Arts. Fred lived in Winston-Salem, teaching at NCSA (now UNCSA) until his retirement in 1999. He also served as artist-in-residence at Duke University and the University of Virginia. He was very proud of his students, many of whom have gone on to play in major international orchestras as well as those who went on to pursue a variety of careers, but all carrying with them their memories of how much they achieved under Fred's tutelage and an abiding love of music. During Fred's time with the Clarion Wind Quintet the group recorded several albums and toured internationally. While playing as principal horn in the Winston-Salem Symphony from 1967 until his retirement in 2008, Fred also played with the Piedmont Chamber Orchestra, including at the inaugural Kennedy Center events. Fred was frequently called on to supplement the horn sections in the Charlotte and NC Symphonies, and touring Broadway shows, such as "The Lion King," when they traveled in the State. One of his favorite "gigs"' was playing for Luciano Pavarotti's sold-out performances in Raleigh, NC, and Charlotte. Fred spent many summers playing at the San Luis Obispo Mozart Festival and the Cabrillo Music Festival in California from the 1960s until the early 1980's, as well as several summer seasons in the orchestra at the Chautauqua Institution in upstate NY. He was married to violist Louise Trent from 1976 to 1980. He later married Elizabeth (Liz) Marren in 1987, his wife of 33 years. Fred and Liz founded Renaissance Marketing, Inc, a small PR and Marketing company where Fred skillfully typeset and designed newsletters, ads and brochures for the company's many clients. During a four-year spell living in Hollywood, Fred kept busy working as a background actor on the sets of many commercials and TV sitcoms. (Look carefully at the reruns of such shows as "NCIS" and "Mom," and you might catch a glimpse of him, drinking a cup of coffee in the background of a cafe or sitting on a porch.) Throughout his retirement he continued to promote the enjoyment of playing horn, working with a small church brass ensemble, a local community orchestra, and leading a recently-formed local horn club with original arrangements. Fred is survived by his wife Liz, son David with his wife Mary, and daughter Ellen with her husband Dan Wasil, and five grandchildren: Harrison and Madeleine Beer, Robert Bergstone, Phoebe and Alexandria Lewis. He is predeceased by his parents and older sister Ellen M. Bergstone, formerly of Palm Springs, CA.

Details about a memorial service will be announced later in 2021. In addition, the UNCSA Horn and Wind/Brass ensembles will be honoring him at their spring concerts on April 16 and March 12, respectively. The Winston-Salem Symphony has announced plans to dedicate a concert in his memory.
To plant trees in memory, please visit our Sympathy Store.
Published by Winston-Salem Journal on Feb. 14, 2021.
MEMORIAL EVENTS
No memorial events are currently scheduled.
To offer your sympathy during this difficult time, you can now have memorial trees planted in a National Forest in memory of your loved one.
GUEST BOOK
5 Entries
Liz, I was sorry to learn of Fred's death. I enjoyed working with Renaissance Marketing in the past and it was obvious that you two were quite a team! 'My condolences to the entire family.
Christina Skeeters
February 17, 2021
Thinking of you...I know you were very proud of him...his history is impressive
Anne Ramm
February 15, 2021
Mr. Bergstone was a fine musician and an equally fine gentleman. His passing is yet another reminder of the glory days of the North Carolina School of the Arts and the artistry and commitment of its founding faculty.
Jim Shertzer
February 14, 2021
David, Ellen, Liz and your families have my sincerest condolences on the death of your father, husband and grandfather. He was such a wonderful musician and presence in the W-S Symphony and community . He will be missed. Sending love and prayers for comfort. Barbara and Drew Edwards
Barbara Edwards
February 14, 2021
Dear Liz,
I read about Fred’s wonderful today in the paper. He was quite and accomplished man is so many areas of life. I remember when you were first interested in dating him, and you said the thing that you loved the most was that he made you laugh! What a wonderful things to have! I’m sorry for you loss. You have great memories of a wonderful man! Jodi Preslar
Jodi Preslar
Friend
February 14, 2021