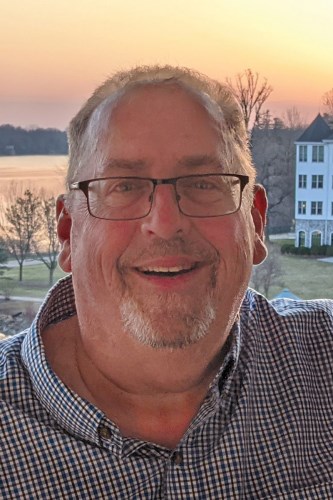 Gary, the son of James A. and Marie E. (Pfragner) Redlin, was born on April 3, 1956 in Hartford, WI. He moved to Baraboo with his family in 1959 when his father was employed by the Schieble Funeral Home.

Gary attended both elementary and high school in Baraboo, graduating in 1974. He attended MATC in Madison and received an Associates Degree in Police Science in 1976. In October of 1977, he was hired as a patrolman with the Baraboo Police Department. In June of 1981, he left the Police Department to join his father in the funeral business. He received his degree in Mortuary Science from MATC-Milwaukee, graduating in 1983. He worked along with father, James Redlin, until Jim passed away suddenly while vacationing in Florida. Gary then took over the business and operated it, along with his wife, Sandy, until May of 2016 when his health forced him to retire. He was dedicated to his profession and strived to continue the work ethic his father instilled in him.

He is survived by his wife of 40 years whom he loved deeply, Sandy, of Baraboo; his son that he was so proud of Kyle Redlin and his wife, Angie Bristol, of Madison; his sisters, Sue Hagedorn and Barb (Paul) Krueger, both of Baraboo; his mother-in-law, Adeline Gibbons of Cuba City; his sisters-in-law, Joyce Gibbons of Machesney Park, IL, Pat (Ron) Rod of Rosenberg, TX, Kathy (Daryl) Kubitz of Cuba City, and Grace (Steve) Heller of Apple River, IL; his brothers-in law, Jerry (Sheila) Gibbons of Darlington, Pete (Kim) Gibbons of Clinton, IL, and Ron (Betsy) Gibbons of Altoona, IA; 21 nieces and nephews and their families; other relatives and many friends.

He was preceded in death by his parents, Jim and Marie Redlin; his father-in-law, John Gibbons, his brother-in-law, Bill Hagedorn; brother-in law, Chuck Gallagher; and nephew, Benjamin Gibbons.

Gary had been a member of St. Joseph's Church, Baraboo Elks Lodge #688, Baraboo Kiwanis, the Knights of Columbus, the Gold Wing Road Riders Association as well as several professional organizations. He had also been a participant with the Team 3 Cardiac Rehab Group at St. Clare Hospital for the last 24 years who he considered his "other" family.

Memorial services will be determined at a later date. Gary had requested that memorials be made to the Cardiac Rehab Department at St. Clare Hospital in Baraboo.

Published by WiscNews.com on Jul. 13, 2021.
To plant trees in memory, please visit the Sympathy Store.
MEMORIAL EVENTS
Sep
11
Visitation
9:00a.m. - 11:00a.m.
EMANUEL UNITED METHODIST CHURCH
101 14th St, Baraboo, WI
Sep
11
Memorial service
11:00a.m.
EMANUEL UNITED METHODIST CHURCH
101 14th St, Baraboo, WI
Funeral services provided by:
Roseberry's Funeral Home - Friendship/Adams Co.
MAKE A DONATION
MEMORIES & CONDOLENCES
Sponsored by Roseberry's Funeral Home - Friendship/Adams Co..
10 Entries
So sorry to hear of Gary's passing. He was so much fun to have a conversation with at Cardiac Rehab. Very friendly guy, certainly will B missed by many.....God speed!
Audrey Sinner
July 26, 2021
I remember him from the funeral home in Baraboo
Vickie L Carrow
Work
July 22, 2021
I'm so sorry to hear about Gary's passing. I have so many wonderful memories of Gary. My Dad was Charles Janssen; and was associated with the Redlin Funeral Home. My deepest sympathy goes to all of the family.
Chris (Janssen) Fay
Other
July 22, 2021
My sincere sympathy to Sandy and family. Gary was a kind and gentle man and helped so many families with their loss.
Cindy Bisch-Tierman
School
July 17, 2021
I´m sad to read about Gary´s death. He helped us so much with our parent´s funerals- I really trusted him. He was just the nicest guy .. you have my sympathy -
Kathi Sinner- Gallus
Friend
July 16, 2021
My deepest thoughts and prayers to Sandy, Kyle and all the family. Gary was a great guy.
Linda Rott
Friend
July 14, 2021
Sandy and Kyle, Mary and I are sadden to here the news of Gary leaving us way to soon. Many,many great memories of times shared in Milwaukee. Our deepest sympathies. Jim and Mary Mellenthin.
Jim Mellenthin
July 14, 2021
Condolences to the entire family. I got to know Gary while in Mortuary school and I was working with a family yesterday that mentioned a wonderful funeral director in Baraboo that had served them in their time of need about 10 years ago, not surprising, it was Gary. May he rest in peace!!
John Gamache
School
July 14, 2021
The Baraboo Kiwanis Club members express our condolences to the Redlin Family. Gary was always a helpful member during his years with the Club. He will be missed in the community. David Vander Schaaf, Baraboo Kiwanis President 20/21
David J Vander Schaaf
Other
July 14, 2021
With deepest sympathy to Garys family and friends. He was so WONDERFUL to myself and my kids when my husband Dean passed away suddenly. Your all in my thoughts and prayers. Connie Harrison
Connie Harrison
Friend
July 13, 2021
Showing 1 - 10 of 10 results