We take a look back at Libertarian pioneer Rose Wilder Lane.

Election after election, we witness bruising political battles between Democratics and Republicans. Examining the history of these parties, one disgruntled independent had this to say:

“… a group of sincere and ardent collectivists seized control of the Democratic Party, used it as a means of grasping Federal power, and enthusiastically, from motives which many of them regard as the highest idealism, began to make America over. The Democratic Party is now a political mechanism having a genuine political principle: national socialism.

The Republican Party remains a political mechanism with no political principle. It does not stand for American individualism. Its leaders continue to play the 70-year-old American professional sport of vote-getting, called politics.”

It may surprise you to learn that these words were penned three quarters of a century ago by a woman people are more likely to know as Baby Rose from the “Little House on the Prairie” TV series.

When Rose Wilder Lane died Oct. 30, 1968, the night before she was to embark on a world tour as a reporter for Woman’s Day magazine, she left behind a remarkable body of writing spanning more than 50 years. Lane made her mark on American literary history by helping shape the “Little House” books, and is one reason why so many Libertarian candidates appear on ballots nationwide.

So how did little Baby Rose grow up to be a pioneer female journalist and an inspirational figure for one of the largest political parties in the country?

Born Dec. 5, 1886, Lane was the first and only surviving child of Almanzo and Laura Ingalls Wilder, farmers on the drought-ridden prairie of South Dakota. After years of successive crop failures and tragedies that included the loss of a second child, the burning down of their home, and bouts with diphtheria and stroke, the Wilders lost their farm. Lane would later describe her childhood as “a nightmare.”

Finished with high school and determined to be independent, Lane headed for Kansas City to become a telegrapher. After transferring to California, she met and married Claire Gillette Lane. The couple traveled extensively, selling real estate in California and writing for varied publications to supplement their income.

But Lane’s writing career didn’t take off until she was hired by the San Francisco Bulletin in 1915. Three years later, the Lanes divorced and Rose Wilder Lane left the Bulletin to become a freelancer. She found a variety of periodicals eager to publish her work, including Sunset, Ladies’ Home Journal, Good Housekeeping, McCalls, Cosmopolitan, Harper’s Weekly, World Traveler, Country Gentleman, and the Saturday Evening Post.

Lane knew how to shape a narrative and used literary techniques to breathe life into nonfiction stories. She received acclaim for her fiction work as well, much of it set in the Ozark Mountains of her childhood. Her short story “Innocence” won an O. Henry prize in 1922, and her novels “Let The Hurricane Roar” and “Free Land” were published to wide acclaim. 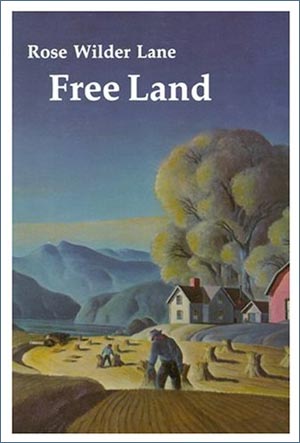 A large part of her literary legacy, however, rests on the work she did as behind-the-scenes editor of her mother’s work. After Laura Ingalls Wilder’s manuscript “Pioneer Girl,” written for adults, failed to attract a publisher, Lane suggested refashioning it into a story for children. With Lane’s considerable input, Wilder reworked the manuscript into “Little House in the Big Woods.” Published in 1932, it became wildly popular and launched a book series still in print today and widely considered a classic of American children’s literature. The long-running TV series later helped introduce a whole new generation to the Ingalls family.

By this time, Lane’s writing had allowed her to travel the world, and she was witness to the political changes taking place in post-World War I Europe. “I am now a fundamentalist American,” Lane wrote in a 1939 autobiographical sketch. Invigorated with a newfound sense of purpose, she began to make a strong political argument for individual independence and freedom from government interference in the everyday lives of Americans.

Her political writing in the Saturday Evening Post, Woman’s Day, and other publications struck a chord. And though the 1943 printing of “Discovery of Freedom” ran only 1,000 copies, it so impressed young thinkers of that generation that it’s difficult to imagine the Libertarian Party in America being created without it. Despite its influence among people like Robert LeFevre, founder of the Colorado Freedom School, Lane continuously refused to have the essay republished, claiming she needed time to update and revise it.

Her most important contribution to political thought was thus out of print for nearly 30 years until it was republished posthumously in 1972 by the newly founded Libertarian Party. Lane’s “adopted grandson,” lawyer Roger Lea MacBride, later ran for United States President in 1976 on the Libertarian Party ticket. He also authored three additional “Little House” books and co-produced the TV series.

Throughout her life, Lane downplayed her role in establishing the “Little House” franchise, even as its success allowed her the financial freedom to support causes she believed in and pursue the political writing for which she hoped most to be remembered. Perhaps then it’s best she didn’t live to see her “nightmare” childhood replayed for millions of Americans in the spin-off series “Little House: A New Beginning.” Nor would she likely enjoy the various lawsuits surrounding the Laura Ingalls Wilder estate.

Lane’s final trip as a freelancer for Woman’s Day was to Vietnam in 1965, when she was 78 years old. Lane worked her themes of independence and Americanism into that final piece, attributing to Major Nguyen Be a quote encapsulating the personal beliefs she’d spent decades espousing, beliefs one can’t help but think were shaped by her hardscrabble pioneer days on the prairie:

“We stay; we survive. Because freedom is right and right is everlasting.”

Amy Mattson Lauters is an assistant professor in the Dept. of Mass Communications at Minnesota State University, Mankato, and editor/author of The Rediscovered Writings of Rose Wilder Lane, Literary Journalist.