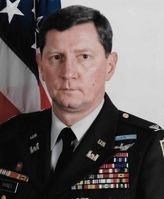 BORN
1945
DIED
2021
FUNERAL HOME
Westford Funeral Home & Cremation
1301 Broadway
Bellingham, WA
Samuel Cullen Raines
February 5, 1945 - October 20, 2021
Bellingham, Washington - Samuel Cullen Raines was born on February 5, 1945, in Miami, Arizona. Raised in the petite and dogwood-filled East Texas town of Palestine, he was the only child of Archie Raines and Effie Marie Gibson, both preceding him in death. He was raised among a large and doting family all within the same town with frequent family potlucks, hunting and fishing trips, and long back yard visits sipping iced tea catching up. Sam's only dream as a child was to grow up to be a soldier.
A Renaissance man, Sam lived his life with an immeasureable zest and positivity. Every meal eaten, every trip, each person, every hobby, was excellent, to use his word. He embraced each day with compliments and excitement. He was a history buff, recited poetry, enjoyed older music, was fascinated by the weather, was featured in a Tom Clancy book, and even interviewed by Connie Chung for an evening news program. The hotter the food, the more he enjoyed it.
Sam was an Eagle Scout and ultimately appointed to the Order of the Arrow. A 1963 graduate of Palestine High School, Sam was an accomplished football player, class president, student council president, elected to attend Texas Boy's State, and appointed Most Representative Boy his senior year. He was appointed to the military academy at West Point, but a football injury prevented him from attending. He was also a camp counselor for children with disabilities in Colorado two summers; it was here he had his first pizza ever!
College brought new leadership opportunities for Sam, including the national service fraternity Alpha Phi Omega and the social fraternity of Phi Delta Theta. He formed a skydiving club in college. After a nearly completed college education, Sam felt the aching call to serve his country. Awarded a class date to begin Naval Flight School at NAS Pensacola in Florida, Sam was given other options to serve his country. It was at this time, Sam was introduced to Special Operations and the clandestine world. Ultimately, the military afforded him the opportunity to obtain two Bachelors' degrees, two Masters' degrees, and Doctoral work in National Security in addition to being designated as US Fellow to study International Security in England.
Sam's career in the United States Army began as an enlisted soldier before later attending Officer Candidate School. His monumental thirty-year career in the military included designations in high altitude parachuting, Airborne Pathfinder and Ranger, type ratings in thirteen different fixed and rotary wing aircraft, and Green Beret. His many awards include the Defense Superior Service Medal, 3 Legion of Merits, 2 Distinguished Flying Crosses, 3 Bronze Stars (2 with combat V), 30 Air Medals (2 with combat V), and 4 Purple Hearts. During the First Gulf War, he commanded the largest Combat Engineer Brigade assembled since WWII. Sam served three tours in Vietnam. He was shot down three times, escaped a POW camp, had a bounty on his head by the enemy, and once survived a day and night breathing through bamboo in a swamp. He credits Tobasco for his survival through the war. He retired in 1995, after a final assignment at the White House, serving under two Presidents as the Director of the White House Contingency Programs.
After retiring from the Army, he began a second career leading a team of retired service people from the Secret Service, CIA, Defense Intelligence Agency, FBI, and National Security Council, as they supported national security interests of not only our government but friendly foreign governments.
After his official retirement in 2008 and a final move to Bellingham, WA, to follow his grandchildren and live in the land of Christmas trees, Sam and Carol joined Assumption Catholic Church, where he served as a Eucharistic Minister, was a member of the Parish Council and funeral committee and achieved his 4th Degree in the Knights of Columbus.
He enjoyed many hobbies and always went all in. He grew hot peppers, became an orchid caretaker, built model airplanes, made stained glass artwork, collected sea glass and fossils, and created mixed media 3D art canvases. He was an avid reader and enjoyed a true epicurean lifestyle through smoking meats and grilling often.
In June 1969, he married the love of his life Carol Faye Farley of Clifton Forge, Virginia. She brought a different southern accent to the table, a homemade biscuit recipe, and together they traveled around the world more than once. In 1973, they welcomed their only child Amy Samantha while stationed in Alabama. Their rich and adventure-filled 52yr marriage began in Addis Ababa, Ethiopia, and concluded in Bellingham, WA. Sam became an Opa in 2002 with the birth of his grandson, and he thought being an Opa was the absolute most rewarding opportunity he had. He never missed a game or a chance for ice cream and sleepovers and advice. There was not a conversation with either friend or stranger where he didn't find a way to sneak in pride in his grandchildren's accomplishments.
Sam will be profoundly missed by those who survive him; wife Carol Faye, daughter Amy, (Tony Zender), his two favorite grandchildren Leland and Lena, his precious toy poodle Ruthie, and granddog Hobbs, and numerous cousins. Throughout his last weeks, Sam maintained he was just an East Texas boy who wanted to be a soldier and is ready to be with his comrades.
Funeral Mass will be held privately, with a full military honors burial in Arlington National Cemetery as soon as possible. Family kindly requests that if any donations wish to be made, please consider a donation to Whatcom Hospice House in Sam's honor. You may share memories at www.westfordfuneralhome.com.

Published by Bellingham Herald on Oct. 24, 2021.
To plant trees in memory, please visit the Sympathy Store.
MEMORIAL EVENTS
To offer your sympathy during this difficult time, you can now have memorial trees planted in a National Forest in memory of your loved one.
Funeral services provided by:
Westford Funeral Home & Cremation
MAKE A DONATION
MEMORIES & CONDOLENCES
11 Entries
Dear Carol and Amy, I learned of COL Raines' passing just last night. I will keep you all in my thoughts and prayers. I was the admin for COL at 7th Engineer Brigade. I worked for many officers during my 30 year career but Sam Raines was my all time favorite. I have spoke of him often through the years. May you find comfort in knowing he's no longer in pain or suffering. So sorry for your loss.
Sherry Tew
December 21, 2021
I want to extend my sincere condolences to Sam´s family as I know it will be a difficult transition for them to endure. I have many fond memories of my cousin, Sam, and it saddens my heart that his life ended all too soon. I am so proud of his dedication to such an outstanding military path, and very grateful for his many years of service to our country. While observing this young toddler (affectionately called Sammy) as he sat playing on the steps of our front porch, never could I have imagined all the great things he would accomplish in the years to come. It is truly amazing to read and hear all the accounts of a life well lived. I regret that distance and the passage of time prevented us from reuniting in these latter years, but I am blessed by all the conversations we had, the numerous family gatherings we attended, and the memories of our youth. With love, Melba (Harper) Freeman
Melba Freeman
Family
November 5, 2021
Carol and family, our deepest condolences. We were shocked to hear about it at mass. We love you both so much our hearts are broken. Mr. Raines was a tremendous influence on our whole family. I will always be grateful for his friendship. We are praying for him now and your whole family. We will be in touch soon.
Tom, Mary, and Sarah Bernard
Friend
October 30, 2021 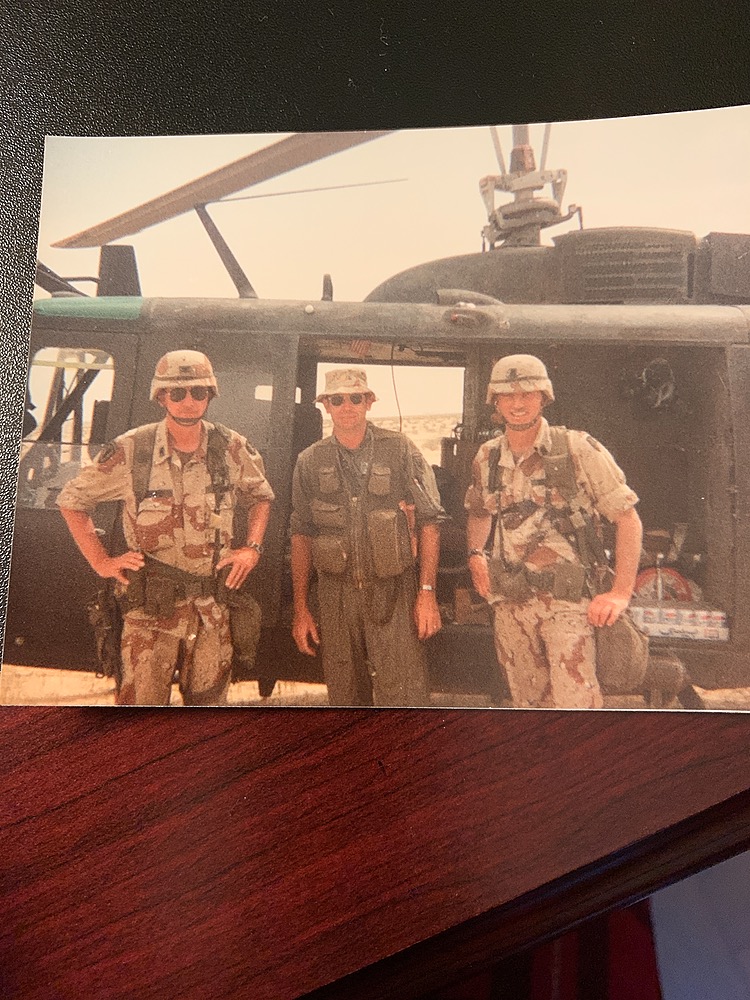 My condolences to the Raines family. Another great American has passed. What a soldier, boss and mentor he was. I was the adjutant for the 7th Engineer Brigade when he took command. Soon I started a bit of whining and maybe some begging to get him to release me to go to a flying position which I´d been missing for about 18 months. COL Raines felt my pain and let me go. I´ll never forget that. Later an opportunity presented itself while we were deployed to Desert Storm. Attached is a photo of us and CSM Dennis Bowers the day I delivered all the fixings for a cookout. Burgers, hot dogs and all the fixings. R.I.P. boss. Clear skies and fair winds.
Rick Welch
Work
October 27, 2021
Carol I am so sorry for your loss he was quite a man and God bless you.
Fred Brighton
Friend
October 26, 2021
Carol and Amy.....I´m heartbroken to lose my cousin and friend, but I know we´ll see him again in Heaven. Please know you have my prayers and if I can do anything for y´all, please let me know. Love you!
Theresa Raines Edge
Family
October 24, 2021
Dear Amy, Carol and family- I only knew Sam as a fellow bench dweller in countless basketball gyms, actively and proudly supporting Leland. Your loss is huge, but I believe he´s still on that bleacher, watching and encouraging all of you. Thank you for sharing Sam with us, and with the world.
Kristina and Matt Daheim
Friend
October 24, 2021
Carol, Amy and family: My heart is heavy over the loss of Sam. I´m filled by the memories of our childhood and the love our family shared. We were all so proud of Sam. You are in my thoughts and prayers.
Dorothy Magee
Family
October 24, 2021
Amy sending you, your mom and entire family the strength and support to maneuver through such a huge loss. What a man. What a life. May he Rest In Peace.
Maria & Ian Morley
Friend
October 24, 2021
Carol and Amy we are heart broken for your loss but so thankful that Sam is with Jesus! May God comfort you and give you His strength in the days ahead. We prayed the devine mercy chaplett over Sam just like we did over daddy and we know Jesus heard our prayers. Lord bless your family, in Jesus name.
sandy hendricks
October 23, 2021
Our sincere condolences to Sam´s wife, Carol, daughter, Amy & family as you each process Sam´s passing. What a full wonderful life he led; we are grateful to have known him; shared in his visits back to his hometown; and honored by his service to our country.
Frank & Linda (Freeman) Ratliff
Family
October 23, 2021
Showing 1 - 11 of 11 results