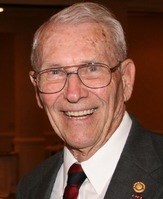 BORN
1925
DIED
2021
FUNERAL HOME
Kenneth W. Poe Funeral & Cremation Service - Charlotte
1321 Berkeley Avenue
Charlotte, NC
Thomas Lowery Burgess
September 26, 1925 - September 8, 2021
Charlotte, North Carolina - Thomas Lowery Burgess, Sr (Tom to his friends) was a great man who lived life to the fullest, believing anything is possible and leading his family to believe the same. Born on 26 September 1925, in Tallahassee, Florida, he left this earthly existence on 8 September 2021.
Tom's parents, Thomas Huger Burgess and Louie Emma (Ellie) Lowery Burgess raised him and his brother, Joseph Hall Burgess, in Ft Myers, Florida. Like most men of this greatest generation, Tom enlisted in the Army upon graduation from high school to fight to ensure our liberty, and the liberty of much of the world, in WWII. He achieved the rank of Sergeant and fought with conviction and bravery in the Battle of the Bulge with the 87th Infantry Division. He was awarded the Purple Heart, Oak Leaf Cluster, Bronze Star, European Theater Ribbon, and Occupation Medal. The city of Plauen, Germany honored Tom and many of his fellow infantrymen on the occasion of the 75th anniversary of the liberation of their city with a weeklong re-enactment and remembrance. Tom received the Legion of Honour from the Republic of France, that country's highest French order of merit, both military and civil, for his service during the war.
Tom graduated from Stetson University under the GI Bill and having been active in Scouting as a boy and undergraduate, started a forty-year career with the Boy Scouts of America. He married his wife of now seventy years, Norma Helien Schultz, in 1950. In the next five years, they birthed four children, Katie (Scott) Tyler of Charlotte, William (Augusta) Burgess of Kingston Springs, TN, Lowery (Pia) Burgess of Cream Ridge, NJ and Robert (Marie Eble) Burgess of Seattle, WA; all who cherished their father and are sincerely appreciative of the life, love and skills he taught them and the moral character he instilled in each.
The Boy Scouts gave the family opportunities to live in FL, NC, and GA before the Scout Executive position opened in the Far East Council. Living in Japan for four years was an experience that has forever shaped their family life. Returning to the BSA national headquarters in NJ, all four children completed high school and each received their undergraduate degrees.
Tom was transferred to the BSA Southeast Region in 1973, settled in Charlotte and became engrained in the community. Retiring from the Boy Scouts in 1987, he became even more active in many organizations, most notably Charlotte Rotary, Providence United Methodist Church, Sons of the American Revolution and the 87th Division Legacy Association. He was a talented woodworker and loved traveling, photography, dancing and, most of all, helping others. He had a quick wit, a keen intelligence, common sense, an incredible memory and a strong commitment to service above self.
In addition to his wife and children, he is survived and lovingly remembered by his grandchildren, Katherine Burgess of San Francisco, and Andrew Burgess of Charlotte. He will be sincerely and deeply missed by all who knew him.
A memorial service will be scheduled at an appropriate time and place to celebrate his life. Memorials may be made to Providence United Methodist Church, 2810 Providence Road, Charlotte, NC 28211. Online condolences can be shared at www.kennethpoeservices.com

Published by & from Sep. 18 to Sep. 19, 2021.
To plant trees in memory, please visit the Sympathy Store.
MEMORIAL EVENTS
To offer your sympathy during this difficult time, you can now have memorial trees planted in a National Forest in memory of your loved one.
Funeral services provided by:
Kenneth W. Poe Funeral & Cremation Service - Charlotte
MAKE A DONATION
MEMORIES & CONDOLENCES
Sponsored by The Charlotte Observer.
0 Entries
Be the first to post a memory or condolences.