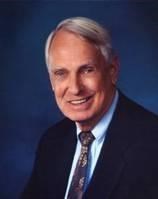 BORN
1936
DIED
2017
Lewis III, Fulton
Jan 25, 1936 - Sept 6, 2017
Fulton Lewis III, of Sarasota, FL, internationally renowned broadcast commentator and lecturer, passed away September 6, 2017, after a brave struggle with heart and lung disease.
Mr. Lewis was born January 25, 1936, in Washington D.C. to the pioneer broadcast commentator, Fulton Lewis Jr. and Alice Huston Lewis.
From his birth, when he was welcomed to the world by a personal note from President Franklin D. Roosevelt, he grew up in the company of world leaders, politicians and celebrities, including Drew Pearson, who was his godfather.
Mr. Lewis recalled his unusual childhood with appreciation and fondness. As a youngster, he "would stumble across presidents, vice presidents, senators and world leaders," at their home in Washington DC or the family's beloved estate in Maryland. His parents included their son at gatherings with friends and dignitaries, allowing him to experience the world from other perspectives.
Despite his privileged upbringing, Mr. Lewis' humble, unpretentious style embraced people from all walks of life and beliefs. He will long be remembered for the twinkle in his eyes, warm smile and joyful laughter. He was self-effacing and always loved a good joke.
Along with being a captivating story-teller and articulate speaker, Mr. Lewis was a gifted pianist. Although he never learned to read music, he could play most anything by ear. Friends loved and appreciated the special moments at gatherings, when he would sit at the piano and play their favorite songs.
Although his love for piano brought great joy to others, it also became a detour during his younger years.
While driving home to Washington DC, after graduating from college, Mr. Lewis missed his exit and spontaneously decided to drive to New York City. With some $200 his pocket, he quickly found a job as a piano player at a saloon/restaurant on Manhattan's East Side. His father, thinking his son was part of the management, visited the saloon with a political dignitary one night and, much to his surprise, found his son pounding out tunes in the smoky bar. Fulton stayed in New York for two years and when he left, Peter Duchin replaced him as the piano player.
Mr. Lewis graduated from the University of Virginia, where he majored in speech, radio/TV and political science. His first job in broadcasting was as news director of a small station in Jamestown, New York. He was hired soon after as research director by the House Un-American Activities Committee of the U.S. Congress. In 1963, Mr. Lewis was named field director of Young Americans for Freedom, a conservative youth group inspired by publisher William F. Buckley Jr. Later, he worked in support of presidential candidate Barry Goldwater, for whom he also was a speech writer.
In the early 1960s, Mr. Lewis became more involved with his father's work in broadcasting and substituted when his father was unavailable for the broadcast.
After his father's death in August 1966, Mr. Lewis was asked by the Mutual Broadcasting System to continue his father's nightly broadcast. He did so until 1979. His commentaries were heard on over 500 of the network affiliates by an estimated 16 million people. He had the distinction of being the youngest nightly news commentator to ever hold such a position.
In his role as commentator, Mr. Lewis traveled extensively to the world's "hot spots" – Vietnam, Northern Ireland, Rhodesia, Nigeria, Biafra, and South Africa, to mention just a few. In 1967, he covered the "7-Day War" alongside the Israeli forces.
As his experiences and career progressed, so did the value Mr. Lewis placed on civil discourse. He believed that people from opposing parties needed to respect the opinions of others and work together for the common good. He felt strongly that political labels shouldn't divide people, as they do now.
Mr. Lewis retired to Florida in 1980 where he established several small businesses. In addition, he dedicated much of his time to the community by playing the piano at retirement homes.
He also served on volunteer boards, including The Broadcasters Club of Florida. Mr. Lewis was active in the Media Roundtable and other civic organizations. He received numerous awards, including Broadcaster of the Year, from the Broadcasters Club of Florida.
Mr. Lewis is survived by his son, Fulton Lewis IV of Houston, TX; daughters Alexandra Lewis from Philadelphia, PA and Kelley Lewis Johnston from Bedford, NY; three grandchildren; his loving companion, Karen Curlin and his many friends.
In lieu of flowers, donations in Mr. Fulton Lewis' honor may be made to Sarasota Memorial Health Care Foundation, Inc., Palliative Care, 1515 S. Osprey Ave. Suite #B4, Sarasota, FL 34239. Or go to: www.SMHF.org. Please specify Palliative Care.
A celebration service will be held Friday November 3rd, 5:30-7:30 pm at the Bay Isles Beach Club, 2111 Gulf of Mexico Dr. 34228. The outdoor service will be casual. Please note that all attendees are advised to arrive between 5:00-5:30 pm in order to be admitted at the gate.
Published by Herald Tribune from Oct. 25 to Oct. 29, 2017.
To plant trees in memory, please visit the Sympathy Store.
MEMORIAL EVENTS
Nov
3
Service
5:30p.m. - 7:30p.m.
Bay Isles Beach Club
2111 Gulf of Mexico Dr., FL
MAKE A DONATION
MEMORIES & CONDOLENCES
1 Entry
My sincere condolences to the family. May God give you the comfort you need in this difficult time.2cor:3,4
Lmc
October 26, 2017
Showing 1 - 1 of 1 results