Michael Walters
Michael Patrick Walters (aka Spunky)
LOMA LINDA, Calif. - Michael Patrick Walters (aka Spunky), born December 4, 1964, Torrance, California, died September 8, 2010, Loma Linda, California. He is
returning home to his Idaho October 1, 2010.
Michael is survived by his son, Shaun Patrick Walters; father, James Patrick Walters; mother and stepfather, Pam and Bill Kennon; sisters, Witney Fhaner and Laura Unferdorfer; nieces and nephews, Matthew, Meredith, Kaitlin, Layne, Abigail, Emma and McKenna; aunt, Jo Witney; cousins, Mikael, Lisbet, Jonathan, and Kevin. He is also survived by friends too numerous to mention and who Michael's family will love, cherish, and appreciate forever.
Although Michael spent his first 12 years in California, he truly came to life when he moved to Pocatello, Idaho, in September 1976. Once there he attended Franklin Junior High, Irving Junior High, and Poky High. After graduating in 1982, Michael attended ISU, where he joined the Phi Sigma Kappa fraternity. This is where he became known as Spunky, a name that stayed with him the rest of his life.
He is now an eternal member of the Phi Sigs. In January 1984, Michael joined the U.S. Army, where he proudly served until he was medically discharged in 1987.
In the words of his friend Mitch Popa:
"Mike Walters (Spunky) (Spunk) (knucklehead) passed away a few days ago. In his wake he leaves many sad eyes who will miss him for the unwavering individual he was. We all have so many great memories because of him and he left us wanting more. An honest sign of a life well lived. It's incredible to think about how many memories we all share with Spunk as the common thread. The mornings on the hill, the nights in the bar, the dust left as we just kept truckin' on. Living life in the present and to the fullest may sound like a cliché, but few will argue it was a matter of fact when it came to Spunky. He had a true knack for self-liberation. There was no job, time table or commitment that was going to keep him from putting his line in the water or his edges to the snow."
Michael will be truly missed by all who had the joy of having him in their lives! For those who loved him a gathering to celebrate his life will be held on Saturday, October 2, 5 p.m. at First National Bar. His family, along with Rafael and Julia Cde Baca, will be hosting a remembrance service on Sunday, October 3 at 2 p.m. at the Cde Baca Residence, 651 Steed Road, Inkom, Idaho 83245.

Published by Idaho State Journal on Sep. 23, 2010.
To plant trees in memory, please visit the Sympathy Store.
MEMORIAL EVENTS
To offer your sympathy during this difficult time, you can now have memorial trees planted in a National Forest in memory of your loved one.
MAKE A DONATION
MEMORIES & CONDOLENCES
6 Entries
Spunk,you were one of a kind. You were like a son to me....I will miss you. I know you and Jack K. are having a few laughs. You leave your friends with a lot of good memories. Love ya
Debbie Green
September 27, 2010
Spunky,
I will miss you and our rides. You always made me smile and laugh. I'm very grateful to have shared time with you. Ride on my friend. Tango
September 27, 2010
Spunk,
You were one of my closest friends, especially in these last few years. Your sense of humor was unique (to say the least), but the thing I will always remember most is your honesty, integrity, and your unparalleled loyalty to your friends.
Go with God, my friend.
Dan Hillebrant
September 25, 2010
Michael was the most precious little boy in my life for many years. He was my first nephew, first baby, and first love. He was without a doubt the most precious of children, with an inquisitive mind, and the sweetest of natures. He was my joy, and will always remain so. Although you are gone, Michael, to me you are as close as the next beat of my heart, for there you resides. I so thank God that we were able to see each other toward the end of your life. My Love is yours, Aunt JO
Aunt Jo Witney
September 23, 2010
Spunky lived life on his terms to the end. A great friend that would give you the shirt off his back if you needed it. I already miss you buddy and I wish you were back. Damn Proud to be your friend and brother!!
Shawn Forney
September 23, 2010 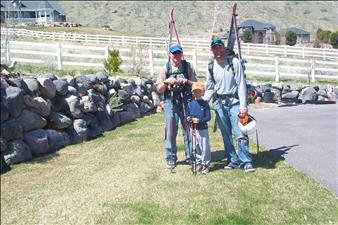 We will always love and miss you Spunky! The Myers Family
Jami Myers
September 23, 2010
Showing 1 - 6 of 6 results