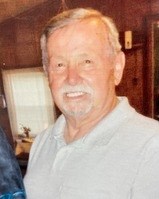 Mr. Caron, known to many as 'Tee', was born on November 28, 1927 in Jaffrey, NH, a son of Flavien and Delia Caron. He was a 1947 graduate of Conant High School in Jaffrey, and had served in the National Guard before being called up to the US Air Force where he earned the rank of Sergeant First Class, and worked as an Aircraft Mechanic during the Korean Conflict. Robert was a member of the John Humiston Post #11 American Legion in Jaffrey.

Upon his return, Robert married Elizabeth (Popple) Caron, and they enjoyed 65 years of marriage together. He had worked as a machinist at the 'Tack Shop' - W.W. Cross Co for more than 42 years, retiring in 1989.

He was preceded in death by his son, Bruce Caron, and by his siblings, Rose Wilkinson, Lena Hautanen, Arlene Naylor and Frederick Caron.

In addition to his wife 'Betty' of Rindge, Robert is survived by his son, Peter Caron of Jaffrey, 6 grandchildren, 11 great-grandchildren, and many nieces, nephews, cousins and close friends.

In accordance with Robert's wishes there will be no calling hours or formal services held. Burial will be private in the family lot at St. Patrick Cemetery in Jaffrey.

Published by Monadnock Ledger-Transcript on Sep. 9, 2021.
To plant trees in memory, please visit the Sympathy Store.
MEMORIAL EVENTS
To offer your sympathy during this difficult time, you can now have memorial trees planted in a National Forest in memory of your loved one.
Funeral services provided by:
Cournoyer Funeral Home & Cremation Center
MAKE A DONATION
MEMORIES & CONDOLENCES
1 Entry
Offering our deepest condolences at this difficult time.
The Cournoyer Family
September 9, 2021
Showing 1 - 1 of 1 results