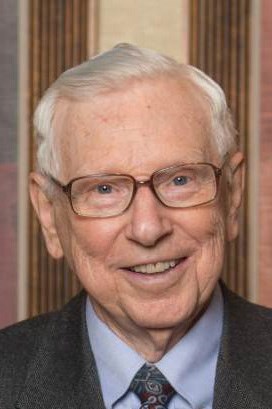 MADISON – This is the story of a man-unique and unrepeatable-who left this world better than he found it, Thursday, Oct. 7, 2021. It's about 97 years filled with the love of God and family, model railroading, writing and classical music, traveling the world, golf and watching his Chicago Cubs win the World Series.

Bill Ehlert was born on March 4, 1924, in Loyal, Wis., to Frank and Helen (Salwey) Ehlert. He grew up with his brother, Redmond, in Wild Rose, Wis. Bill was passionate about learning, but college would have to wait four years until he completed his service with the U.S. Army Air Corps in Panama during World War II. Thanks to the generous GI bill benefits, Bill graduated from the University of Wisconsin-Madison with a B.S. degree in education and an M.S. degree in English. It was at UW where Bill met his beloved wife, Reva Riley. On June 2, 1951, they were married and embarked on a 60-year love affair.

Bill and Reva settled in Madison, and he began his 34-year career with the Madison Metropolitan School District at West High School, teaching English and directing the school's AV department. They built a house in the early days of the Westmorland neighborhood and raised four children there – calling it home for 52 years. The grandchildren have wonderful memories of the Paunack house-the smell of coffee and toast in the morning, playing basketball in the driveway, the beautiful flower gardens where their kickballs would hide, and, best of all, the train layout that took up half the basement. Model railroading was Bill's passion. He achieved Master Model Railroader status for modeling excellence because he was that good. He scratch built historically accurate buildings and cars and published how-to articles so other modelers could do the same. In addition, Bill held numerous executive positions within the National Model Railroad Association and Soo Line Historical and Technical Society.

And because one hobby wasn't enough, he played golf until he was 96 years old; wrote four books-three of which he sold-and 15 modeling articles; as well as collected stamps, coins and the Saturday Evening Post.

Bill retired in 1986, and he and Reva spent many happy years in retirement traveling to Europe and throughout the U.S. They were inseparable. When Reva died in 2011, it left a huge hole in his heart. He reconnected with a dear family friend, Helen Straw, and as he wrote in his diary, "yesterday was the first day in a long time that I felt fully alive and happy." Helen and Bill spent the last 10 years traveling, going to concerts, plays and restaurants. And when COVID hit, they enjoyed quieter times together, reading, knitting and dining in. In August, Helen died peacefully in her sleep, and Bill lost one of the best gifts God could give him late in life.

Visitation will be held on Tuesday, Oct. 12 from 9:30 a.m. until the Mass of Christian Burial at 11 a.m. at QUEEN OF PEACE CATHOLIC CHURCH, Madison, with Father Rich Litzau presiding.

The Ehlert family would like to thank the staff and nurses at All Saints Assisted Living and Agrace Hospice for their attention and support as Bill neared end of life. We'd also like to thank Sherry Fitzmorris for the loving care and companionship she gave her "renaissance man." You are family now. Bill was a lifelong volunteer for the American Red Cross of Dane County, so please consider a donation in his name.

Published by Madison.com on Oct. 10, 2021.
To plant trees in memory, please visit the Sympathy Store.
MEMORIAL EVENTS
Oct
12
Visitation
9:30a.m. - 11:00a.m.
QUEEN OF PEACE CATHOLIC CHURCH
Madison, WI
Oct
12
Mass of Christian Burial
11:00a.m.
QUEEN OF PEACE CATHOLIC CHURCH
Madison, WI
MAKE A DONATION
MEMORIES & CONDOLENCES
3 Entries
You have our sincere condolences for your loss.
Jerry and Julie Buenger
Friend
October 12, 2021
Always a pleasant and encouraging person. We´ll miss him in the Model Railroad and Soo Line Historical Society communities.
Bob Wundrock
Friend
October 12, 2021
What a life well-lived. Here at the American Red Cross we appreciated Bill for his volunteer service, his wisdom and his easy nature. He will be missed but not forgotten.
Ann Bodden
Other
October 12, 2021
Showing 1 - 3 of 3 results