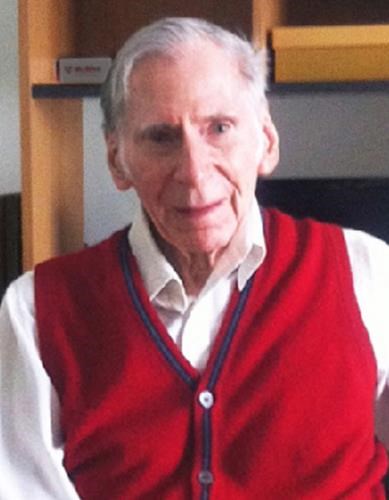 Born January 17, 1922 in Allentown to Asturio Adda and Antoinette Casarotto, Lionel fought in WWII as part of the 99th Infantry Division, participating in the Battle of the Bulge. After returning home from Germany, he attended Lehigh University, earning a B.S. in Engineering Physics and ultimately a Ph.D. in Physics.

His career involved three years with the Federal Telecommunications Laboratories, Nutley, NJ, then 33 years with Bell Laboratories, Allentown, where he held the position of Distinguished Member of Technical Staff.

Lionel's entire career focused on the field of semiconductors, including research in the properties of geranium, silicon and gallium arsenide, as well as development in their purification and single crystal growth. He also worked on the development of transistors and integrated circuit devices. He was a lifetime member of the Electrochemical Society.

Lionel hiked and climbed in the Alps of Europe and peaks of Colorado. He visited many of the National Parks in the West. He was a hiking leader of the Appalachian Mountain Club, leading many hikes on the Appalachian Trail, and he led a Presidential Range Walk in New Hampshire. In his retirement, he visited many countries around the world.

For many years, Lionel held the volunteer position of Treasurer and Membership Secretary of the Lehigh Valley Chapter of the Battle of the Bulge Association.

He was a parishioner of Saint Thomas More Church of Allentown.

He is survived by cousins Joan Burton, Carol Passaro and Vanessa and Rhonda Reed. In lieu of flowers donations in his name may be made to the Physics Department of Lehigh University or to a charity of one's choice. Services will be announced in the future.
Published by Morning Call on Feb. 14, 2021.
To plant trees in memory, please visit the Sympathy Store.
MEMORIAL EVENTS
To offer your sympathy during this difficult time, you can now have memorial trees planted in a National Forest in memory of your loved one.
MAKE A DONATION
Please consider a donation as requested by the family.
MEMORIES & CONDOLENCES
7 Entries
I just met Lionel via correspondence last month. On his birthday (January 17, 2021), Lionel sent us (Battle of the Bulge Association - BOBA) an article he wrote for our “Bulge Memories” column which is printed in the The Bulge Bugle® Winter magazine. We wish he could have seen it in print, but we are so glad he recorded his experiences so that we could share his memories. He was a huge support to BOBA throughout his entire life. What an amazing man! Please read his experience during Christmas 1944 that he wrote just last month on battleofthebulge.org. What an amazing man! Condolences to family and all his friends in Lehigh Valley VBOB Chapter.
Betsy Rose
Friend
February 15, 2021
Such an honor and joy to have known him
Mike
Friend
February 14, 2021
Just exchanged a few words words when he came to the colloquium in our department. A very special man!!

Sincerely,
A Grateful US Citizen
February 14, 2021
Thank you for your service to our country.

Rest In Peace.
February 14, 2021
Thank you for your service
RIP
February 14, 2021
God bless to a true WWII hero and a great friend. He was always very proud of his service during the Battle of the Bulge and shared his stories often to many adults and students.
He was one of the smartest men I ever met. We will miss you, Lionel.
Stephen Savage
Friend
February 13, 2021
Showing 1 - 7 of 7 results