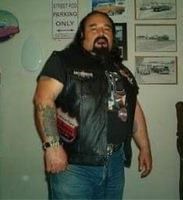 BORN
1961
DIED
2021
FUNERAL HOME
Salas Brothers Funeral Chapel Inc
419 Scenic Dr
Modesto, CA
Joseph Pacheco
March 18, 1961 - August 13, 2021
Modesto , California - Our beloved father. The whole family is thoroughly devastated with his unexpected passing.
Joseph Richard Pacheco was born to Joseph and Marilyn Pacheco on March 18th, 1961. He was reunited with his parents after his passing on August 13th, 2021 in Modesto CA.
He was loved by so many. He is survived by his first spouse, Nellie Rush, as well as their children Joseph Rush, Andrea Rush, David Pacheco and Jessica Pacheco, He is also survived by Kelly Crediford and their children, Joseph Pacheco, Lilawakan Pacheco, Johnathan Pacheco and Sixteen grandchildren. He also leaves behind his brother and sisters, many nieces and nephews and great nieces and nephews. He had such a big love for his friends and family.
He was a very talented painter, as it was his passion in life to paint and restore classic vehicles and bikes. He was self-employed and also worked for Robert and Niki Bryan who treated him like family at Motherlode Customs in Sonora CA.
He was a music lover in general, though he loved classic rock and oldies. He had a love for movies. A few of his all-time favorite movies were American graffiti, Hollywood knights and Tombstone.
Though he played the tough guy and could be intimidating at times, he only had a temper when he needed to. He had a very special presence about him. He was magnetic in a way that even if you didn't know him, when he talked to you, you'd feel like you had known him forever.
He was a sturdy character with a keen sense of humor and tender soul. Though we knew his sense of humor to be crude at times, he was known to appreciate a good joke. His loud, contagious laugh will forever be missed.
Services for Joseph Pacheco will be at the Italian Cemetery: 540 F st, Colma Ca 94014 August 31st at 11:00 am.

Published by Modesto Bee on Aug. 27, 2021.
To plant trees in memory, please visit the Sympathy Store.
MEMORIAL EVENTS
To offer your sympathy during this difficult time, you can now have memorial trees planted in a National Forest in memory of your loved one.
Funeral services provided by:
Salas Brothers Funeral Chapel Inc
MAKE A DONATION
MEMORIES & CONDOLENCES
Sponsored by ModestoBee.com.
4 Entries
Rest in peace! "We may rise and fall but in the end we meet our fate together."
Mark Riolo
Friend
September 5, 2021
May your hearts soon be filled with wonderful memories of joyful times together as you celebrate a life well lived.
Lisa Carver
August 31, 2021
You will be missed ,be free my friend ride free
Kristy Riolo
Family
August 29, 2021
I will miss My confidant my brother, my best friend. Will forever cherish the memories of our work together some of the sweetest ride's I've ever done was with you!! My brother until we meet again in the big shop above where we will continue our builds together!!! Love you brother!!!
Ross Stemple
Family
August 27, 2021
Showing 1 - 4 of 4 results