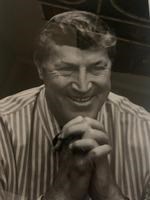 BORN
1934
DIED
2021
Dr. William S. McAfee
January 30, 1934- September 9, 2021
Monterey
On a warm September morning just days after celebrating what would have been his 63rd wedding anniversary, Dr. William S. McAfee took his last breath and re-joined the love of his life, Patty.
William Shannon McAfee, Bill to his friends, Poppie to his family, and a true gentleman to all he met, was raised in Portsmouth, Ohio. A self-proclaimed "little Country boy," Bill was born to Clarence Shannon and Myrtle Watrous McAfee on January 30, 1934.
Bill received his bachelor's degree from Ohio Wesleyan University and graduated from The Ohio State University College of Medicine in 1961. Though originally interested in orthopedics, Bill traveled to the University of California, San Francisco Medical Center for a surgical internship and found his passion in 1962 when he pursued a residency in otolaryngology.
Bill married Patty on September 6, 1958 in his hometown church in Portsmouth. From there, Bill's career took them first to San Francisco then to Charleston, South Carolina where he served at a Naval Hospital. In Charleston, a trusted mentor told him about the Monterey Peninsula. Once on the Peninsula, Bill became an integral part of the medical community, practicing for 36 years. During that time, he co-founded Central Coast Head and Neck Surgeons and the Monterey Peninsula Surgery Center. In 1995, he established the Rotacare Clinic in Seaside to provide free medical care for uninsured patients. In 2003, Bill was named Physician of the Year of Monterey County, and in 2010 he received the Jefferson award for his service to his community.
Throughout their marriage, Bill and Patty loved to travel, often planning cruises to new and different destinations. Their favorite spots, though, were Hawaii and Sedona, Arizona, to which they were frequent travelers.
Bill's earnest voluntary spirit found him serving in the Rotary Club of Monterey, as a bell-ringer for the Salvation Army, and in many other volunteer pursuits.
Bill was a member of a number of medical associations, the Monterey Peninsula Country Club, Beach and Tennis Club, Old Capital Club, Pacheco Club, as well as the First Presbyterian Church of Monterey.
William Shannon McAfee was proceeded in death by his wife Patty Wellman McAfee, parents Clarence Shannon and Myrtle Watrous McAfee, sister Ruth Jones, in-laws Roy C. Wellman, Sr. and Thelma Wellman.
He is survived by his son Michael McAfee (Jenny), son Timothy McAfee (Amy), and daughter Marcie Carrier (Matthew); his grandchildren Sophie, Zoe, and Gracie Carrier; Kate, Molly, and Lily McAfee; Ian and Colin McAfee; several nieces and nephews; and scores of people who have been adopted as family.
The family would like the say a special thank you to Jone Togamalo who spent the last two years caring for Bill and to Hospice of the Central Coast.
The family will be holding a private burial ceremony. A celebration of Bill's life will be held at a later date to allow family and friends to attend from afar. Those wishing to make a memorial gift in his name are invited to consider the Salvation Army or a charitable contribution of their choice in lieu of sending flowers.


View the online memorial for Dr. William S. McAfee
Published by Monterey Herald Obits on Sep. 17, 2021.
To plant trees in memory, please visit the Sympathy Store.
MEMORIAL EVENTS
To offer your sympathy during this difficult time, you can now have memorial trees planted in a National Forest in memory of your loved one.
MAKE A DONATION
MEMORIES & CONDOLENCES
Sponsored by Monterey Herald.
8 Entries
Bill was the epitome of the outstanding physician and community leader who was a delight to work with. He was a gift to so many in our community.
Alfred M. Sadler Jr. MD
Work
October 18, 2021
Bill and Patty were such good friends, starting in Charleston when we were all in the Navy. Andy is probably the "mentor" mentioned in the obituary - but really was a colleague. But he told Bill about Junia's Dad, Dr. John Gratiot, in Monterey and the rest is history. We live in the Chicago area but shared time with Patty and Bill whenever we were in the Monterey area. They were both such good friends and people and we rejoiced at the arrival of each of their children into their family over the years. We'd love to know when the memorial service will be and how to participate from Illinois. Peace to them. Junia
Junia and Andy Hedberg
Friend
September 22, 2021
We want to express our sincere condolences to Dr. McAfee's family at this time of loss. We are grateful to Dr. McAfee for his contribution to The Salvation Army's work of helping those in need. God bless you!
Major John Bennett -The Salvation Army
September 20, 2021
Our hearts go out to you all! "Doc" was truly a good guy! How many times did he care for me or my family when sick? Innumerable. He and Patty were a weekend respite for Pete while at Stevenson. We all go waaaayyyy back. We respected him. We felt loved by him. It was a beautiful way to "grow up": safe but free. Loved. We pray God´s love and mercy sustains you all! Our best! Kim and Pete Donlon
Kim and Pete Donlon
Friend
September 17, 2021
I remember Dr. McAfee from the Surgery Center. A fine man. Also remember his son Mike. My condolences to the family.
Major (Ret) Mike Markovitch
September 17, 2021
I read in the newspaper this morning about the passing of the best doctor I ever had, and a real friend. I cried. Dr. Bill was the most compassionate and caring physician I've had in my life. I met Bill at an appointment in his office in 1979. After several tests, he discovered cancer on my vocal cords. Over the next three years, Bill performed 4 surgeries, the last one required removal of my vocal cords. He cried after surgery while meeting with my wife to update her on the procedure. The next morning Bill came to my ICU room and told me he was sorry he had to perform this type of operation on such a young person. He said he would work to find a way for me to regain my speech, which is exactly what he did. About six months after surgery he called my wife and told her he believes he found a new device that might make speaking possible. Two weeks later I met him in his office and after a minor surgical procedure, the device was implanted. It took about six weeks of speech therapy, but the device was so successful, I was able to return to work. During this years long journey, Bill continually kept in contact, always concerned about my health and wanting to know how I was doing. One occasion, my wife called him on an early Saturday morning telling him I was having trouble speaking. He told her to have me meet him at his office (which of course was closed). When I arrived, it was obvious from his dress that he was planning a golf game with friends. When I asked him about it, he said this was more important. He fixed the problem, but obviously missed his tee time. I expressed my regret, but he assured me my health was more important to him. Who does that??? Not only that, several weeks later he called me at my office and invited me to play golf at the "club" on Saturday. This man demonstrated commitment beyond any measure. But I know I'm not the only patient who was the beneficiary of such benevolence, kindheartedness, and compassion. Dr. Bill will be missed here on this earth, but has rejoined the love of his life, Patty. PTL
David Fortune Sr.
September 17, 2021
Remembering so many wonderful memories together. He was a first class great guy. Happy he is with Patti in the glory of God. Rest in Piece dear friend. Love to the family.
Donna Adams
September 17, 2021
Bill and Patty were beloved friends for nearly all of our adult lives. Needless to say, they will always live on in my heart. Much love to all of the children and grandchildren .... "Aunt" Audrey
Audrey O Loggia
Friend
September 17, 2021
Showing 1 - 8 of 8 results