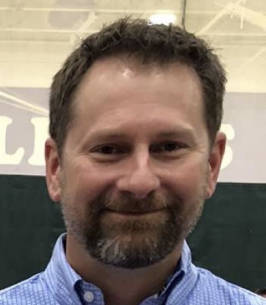 ABOUT
Basehor-Linwood High School
FUNERAL HOME
Alden-Harrington Funeral Home
214 Oak Street
Bonner Springs, KS
Craig E. Moody
Craig E. Moody, age 48, of Baldwin City, Kansas and previously of Basehor, KS., passed away on Sunday, November 14th, 2021 after a short and courageous battle with a rare form of Cancer. Visitation will be 5-8pm Friday Nov. 19th at the Basehor United Methodist Church. Funeral Services will be 11:00am, Sat. Nov. 20th also at the Basehor United Methodist Church with burial to follow at the Glenwood Cemetery in Basehor. Memorial Contributions can be made to Annette Moody for a Fund to be set up for their Children or the KU Cancer Center, both can be mailed to the Alden-Harrington Funeral Home or dropped off at the Visitation and Funeral.
Craig was born on March 4, 1973 in Kansas City, KS and was the youngest of two sons born to Ross N. & Audrey (Wells) Moody. He grew up in Basehor and graduated from Basehor-Linwood High School in the Class of 1991. Craig married Annette (Freeland) on May 3, 1997 in Valley Falls, Kansas and together they made their home in Basehor where they raised their three children. Craig had an interest in Antique Tractors that started when he was a little boy; in fact he entered his first Antique Tractor Pull in 1983 on his brothers 1936 John Deere Model A Tractor put on by the Basehor Lions Club. Over the years Craig has been involved with and was an active member of the McLouth Threshing Bee, at one time serving as Vice President. Craig was very proud of his restored 1935 John Deere Model A Tractor & Cultivator and that he passed his love for Antique Tractors and Ford Trucks on to his children. Craig had worked at Penny's Concrete and MSI where he became vested in the Local Carpenters Union, before taking a job at Kansas Gas Service. He was preceded in death by his maternal grandparents Chester E. & Okie Mae Wells, paternal grandparents Oliver L. & Mina Faye Moody and by two infant children. He is survived by his loving wife Annette Moody and their three children McKinsey, Trinity & Wyatt, all of the home. His parents Ross N. & Audrey Moody of Basehor, KS., and brother Ross A. Moody of Linwood, KS., as well as several extended family members and many, many friends.
To Craig, his family meant everything to him and he meant the world to them. His wife Annette summed it up lovely when she wrote this.
"Just hold me one more time and tell me everything is going to be ok. Just tell me you love me. Just look at me one last time with that sparkle in your eye and that smirk on your face, totally giving away that you're up to no good. Hold my hand while I worry about things that I can't change. Take one last adventure with me. I'd give anything for just one more, good day, anything to hear your voice.
At 6:52 pm on Sunday 11-14-21 at 48 years old, your life on this earth ended and took with it my entire heart. How do I even wrap my mind around the fact that our life together is over. We were supposed to grow old together. We were going to travel and see the world together. We were supposed to build the house we dreamed of and sit on the porch watching sunsets together. I'll never look at another sunset and not think about you and how you would always say "Man that would paint a beautiful picture." Craig you were truly larger than life. The amount of people that love you and are now embracing the kids and I as we try to figure out how to move forward without you is so overwhelming. You fought such a good fight. You showed our kids how to be strong and fight till the very end. The kids and I talked about how strong you were, always saying "Today is going to be a good day" even though we could see the pain all over your face. We've decided that we will try to start each day with that same mind set. As much as it hurt to let you go, I find so much comfort in knowing you are no longer in pain. You are strong and whole again. We said from the very beginning we were a team and we would do this together, that it was going to be an epic love story and oh it was. I promised you that I would not leave your side, that when the end came I would be right there holding your hand helping you cross over. I prayed that Jesus would come for you and personally guide you through the gates of Heaven and I have no doubt that he did because your passing was the most peaceful thing I have ever seen. And as much as I would have loved to have had just one more day with you, I couldn't bare to see you suffer any longer. The kids and I will miss you forever, but we will find ways to honor you daily. You told me we would be ok, and we will eventually find a way to be ok, but we will never be the same. I know this life is temporary and I'll see you again. I will have nothing to fear when my time comes because I know you will be waiting for me on the other side. I love you with all my heart Babe, this is just a temporary goodbye."
Published by Alden-Harrington Funeral Home on Nov. 17, 2021.
To plant trees in memory, please visit the Sympathy Store.
MEMORIAL EVENTS
Nov
19
Visitation
5:00p.m. - 8:00p.m.
Basehor United Methodist Church
18660 158th Street, BASEHOR, KS
Nov
20
Service
11:00a.m.
Basehor United Methodist Church
18660 158th Street, BASEHOR, KS
Funeral services provided by:
Alden-Harrington Funeral Home
MEMORIES & CONDOLENCES
0 Entries
Be the first to post a memory or condolences.