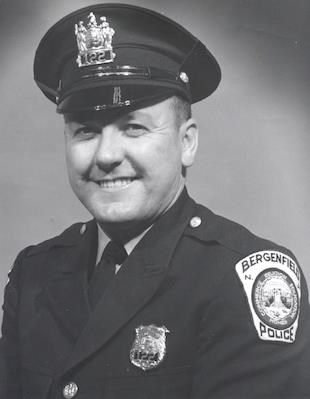 Bergenfield - Thomas Joseph Lee, Jr of Bergenfield, NJ (fondly known as T.J.and Poppy by his grandchildren and great-grandchildren) passed away on Wednesday, May 26, 2021, at the age of 87 at home surrounded by his family. He was one of 20 brothers and sisters from an Irish Catholic Family who all said he was a terrible violin player. TJ immigrated from St John's Newfoundland, Canada and he played hockey for the Ranger's farm club (Cyclones). He enlisted in the United States Air Force during the Vietnam War and was assigned to the military police. He was a Bergenfield Police Officer and rose to the rank of Detective, retiring in 1993 after 31 years of service. Retired Bergenfield Police Chief, Richard Baroch, fondly referred to TJ as a "Prankster" but always a loyal, devoted Police Officer. Furthermore, the Chief stated that TJ was instrumental in starting The Crime Stoppers Program in Bergenfield. He was the president of the PBA Local 83, which later became Local 309. He was elected President a total of 3 separate terms. He was President of the Bergenfield PAL and was a fixture at the PAL complex (Pony Field) for many years. He was able to acquire the first set of field lights for the PAL Pony Field from the Polo Grounds in NY. He was also the driving force that created the PAL complex, which went from 1 playing field to 4 playing fields. He managed the 1976 Bergenfield Pony League Baseball State Champs. His second home was St John's Church where he ran the Bingo program for over 40 years. He could always be found in St John's Conlon Hall cooking for the Christmas Bazaar, CYO Spaghetti Dinner (every Palm Sunday), Holy Name Society meetings, Local PBA meetings, and many of other fund raising functions. He was a tireless volunteer every year at St John's Carnival running the money wheel. He was also the Honorary Grand Marshall in the 2010 Bergenfield St Patrick's Day Parade. He Refereed Bergenfield Junior Football and Umpired Men's Sunday Softball League. He was a member of the Board of Directors of "The Way," a group of volunteers founded by Ray Callahan that transported residents to the doctor. TJ was also known to volunteer for the Mount Carmel Guild, who assisted in educating Handicapped and Down Syndrome Children. TJ would give you the shirt off his back whether he knew you or not. He was a member of the Bergenfield Elks and Knights of Columbus. People could always find him at Tommy Fox's Public House sharing a meal and a drink with family and friends, always joking around, making people laugh and singing his favorite Irish/Newfoundland songs. His favorite way to end a conversation was to say "God Love Ya" He could also be found at his favorite breakfast spots, "Dan's Deli" and "What's Cooking" Ti also enjoyed many Friday nights at the Meadowlands Racetrack with his betting partner, his wife Sally who he fondly called "Do-Do" Lastly, one of his greatest pleasures in life was to spend time with his family especially his grandchildren and great-grandchildren. Devoted husband of Sally D. Lee (deceased February 28, 2007). Devoted father of Margaret A. (Meg) Casper, Thomas J (TJ) Lee, III (and his wife Peggy), and the late Sally D Lee. Loving grandfather of Sally Lee (Dan), John D, III, and Thomas E Casper (Jessica) and Brieanne (Zach) and Jessica (Doug). Loving great-grandfather of Trent, Megan, Danny, Sloane, Kiera, and Brian. Visiting at Riewerts Memorial Home 187 S Washington Ave., Bergenfield, NJ on Thursday and Friday from 4-8 PM. All will meet at the funeral home of Saturday at 8:30 AM for the Funeral Liturgy at St John the Evangelist R C Church, Bergenfield, NJ at 10 AM. Interment to follow at Mt. Carmel Cemetery, Tenafly, NJ. Memorial donations may be made to St. John the Evangelist R.C. Church, 29 N. Washington Ave., Bergenfield, NJ 07621 or to the Bergenfield PAL, PO Box 5063, Bergenfield, NJ 07621. Leave a lasting condolence at riewertsmemorialhome.com

"I'll see you when I'm looking at you", says TJ

Published by The Record/Herald News from May 26 to May 27, 2021.
To plant trees in memory, please visit the Sympathy Store.
MEMORIAL EVENTS
May
28
Visitation
4:00p.m. - 8:00p.m.
Riewerts Memorial Home
187 S Washington Avenue, Bergenfield, NJ
Funeral services provided by:
Riewerts Memorial Home, Inc. - Bergenfield
MAKE A DONATION
MEMORIES & CONDOLENCES
Sponsored by Riewerts Memorial Home, Inc. - Bergenfield.
4 Entries
This is so heartbreaking to hear of the loss of Officer Lee. I remember him very fondly as well as his family. TJ was in my class, while I sang in the choir with Peggy and Sally was so special and I loved her so much. SO many great memories. RIP Mr. Lee you will be missed but never forgotten
Alicia Juergensen
Other
July 5, 2021
Our condolences to the family. Our thoughts and prayers are with you. RIP TJ
Javier Family
Neighbor
May 29, 2021
Meg, helping you celebrate your father's life by name in prayer this week. Pam Wynne, Jacksonville FL
Pam Wynne
Classmate
May 28, 2021
I remember TJ well as a fellow Detective. I would always go through TJ to arrange for our PBA fund raiser dances at Conlon Hall. Great guy, Great sense of humor, big heart. God Bless TJ on his journey, and my condolences to his family
Bill Macchio
Coworker
May 27, 2021
Showing 1 - 4 of 4 results