GAUDENCIO THIAGO DE MELLO
THIAGO DE MELLO--Gaudencio, age 80, Grammy Award nominated composer, arranger, multi-instrumentalist, former Brazilian soccer coach during the time of Pele and Garrincha, and champion of social justice died on November 11, 2013 at his home after a long illness. After studying architecture and then physical education, he had a successful career in professional soccer, initially as trainer for Rio's legendary Botafogo, and later on, as coach for Deportivo Cali and Union Magdalena in Colombia. Without being able to read a note, he came to New York at age 33 to pursue his dream of becoming a musician. He studied classical guitar and founded the Guitar Society at the United Nations in 1970, which he directed for 10 years. He founded his band, Amazon, and released his first of many recordings in 1973. He also founded and directed the Jazz Ensemble at the Rudolf Steiner School in New York City, where he taught for 29 years. He was voted among the 10 best percussionists in the U.S. by DownBeat Magazine, in 2000, which also chose his re-released 1973 LP, now as the CD "The Music of Thiago," as the 2nd Best Re-Issued CD of the Year-1999. He taught "organic percussion" and created many of his percussion instruments out of gourds and discarded repurposed woods. Several of his compositions were recorded on three different albums nominated for Grammy Awards in three different categories: New World on Paul Winter's "Earth-Voice of a Planet"; Classical Crossover in collaboration with Sharon Isbin's "Journey to the Amazon" and Classical on Sharon Isbin's Grammy winner "Dreams of a World". The date of his memorial service will be announced later. In lieu of flowers or gifts please consider a donation in his memory to the Rain Forest Alliance www.ra.org or Madre www.madre.org for human rights. Pursuant to his wishes, and indicative of his poetic, passionate, humorous and meaningful existence, his ashes will be scattered at the junction of the Rivers Solimoes and Negro, in the Amazon, the source of his life and music. Thiago is survived by his four beloved children: Janine, Ayla, Pedro Paulo, Fernando; his favorite son-in-law, Eckart; his devoted former wives, Mary and Bette; his dearly loved sister, Maria do Ceu, and cherished brother and world renowned poet, Amadeu.

Published by New York Times on Nov. 13, 2013.
To plant trees in memory, please visit the Sympathy Store.
MEMORIAL EVENTS
To offer your sympathy during this difficult time, you can now have memorial trees planted in a National Forest in memory of your loved one.
MAKE A DONATION
MEMORIES & CONDOLENCES
Sponsored by His Loving Family.
27 Entries
I miss Gaudencio, my mentor, teacher and friend, very much. Hes always in my thoughts and heart. His music is a beacon for my life and music. Miss you man . . . .
James Silberstein
Friend
November 7, 2019
I knew him and admired and loved him as did my son, Mark also a musician and composer whom he called Maestro. Thiago was an inspiration and a priceless gift to all who knew him
Elena Kondracki
April 16, 2016
Thiago was my first guitar teacher. I met him in Central Park when he was playing guitar during a break from his Rudolf Steiner soccer class. I'd never heard anyone play like that before, and I was enthralled. He started me on my life long love of guitar and career as a professional guitarist. I just learned today of Thiago death, and am so saddened. I wish I'd seen him before he died. I sent him an email just a few days ago about his beautiful song Vuo-me Embora.

Love always,
James Silberstein
March 9, 2014
Me entero del deceso de Gaudencio Thiago de Mello mientras escucho un delicioso CD suyo, The Right Move, que me regaló su hermano, mi amado amigo y cómplice Thiago, el poeta del Amazonas. Consuelo y abrazo de amor para él y toda la familia
Constanza Vieira, Bogotá, Colombia
Constanza Vieira
December 27, 2013
My memories: Hey ding dong put your bang bang on the seat! Tuck in your shirt! And the statues of his 3 wives, which we drove by on our to gym class each week.
December 2, 2013
He sounds like a truly amazing person. He definitely made his mark in this world.
Laynette Adams
November 27, 2013
Susan Graham
November 19, 2013
I loved working with Thiago as a coach and teacher at Steiner for many years. He always made me laugh. He called me "Miss a Ringger" He will be missed.
Tracy Ringger
November 18, 2013
He will never be forgotton. May he RIP. My heart goes out to his loved ones. He touched so many lives.
agnes kastanos
November 18, 2013
"C'mon you Ding-Dong!" LOL! I will always remember that with joy and laughter to the man that I highly respected during my years at Steiner. My condolences go out to the family and those who knew him well.
Jose Rios
November 15, 2013
I didn't know him but I sure do appreciate the time he took to teach one of my mentors. But at least his sound still lives on, that we may learn for generations to come.
Jamie Chatman
November 15, 2013
I will always and forever remember his wild hair and easy going attitude..always positive and loved every one of us....RIP...I loved gym class at Steiner when he was present after he left it was never the same....
Alexandra Jakab
November 15, 2013
I remember you very very well, not only from our days at the Steiner School, but even many years later, running to you at a recording studio. You were using your body as the ultimate percussion instrument. It was inspiring. Thank you for all your gifts in music, humour and sensitivity. Deepest condolences to your family.
Miles Roston
November 15, 2013
Mr. Thiago as we called him was my PE teacher for many years at Rudolf Steiner School. I fondly remember his exuberant nature and the twinkle in his eye. My thoughts are with you, his family.
Carmel Benson
November 15, 2013
Gaudencio was a bright light which shined only too briefly touching all who knew him. I remember his radiant smile, his self-depracating humor, his wisdom and his bear hugs. He truly was my favorite ex-brother-in-law.
Steve Hefler
November 15, 2013
We have lost a tremendous educator and artist. My sincerest condolences to his family, as well as to all of us who had the great fortune of knowing him.
Michelle G.
November 15, 2013
Our profound sympathy to all the family on the loss of this multi-talented father, husband, relative, and friend. Fred and Alice Perkins
November 14, 2013
Our beloved Gau, your great gifts - music, friendship, activism for peace, harmony, justice - live on in our hearts and in the world
Heart to heart - Clare and Blanche
Clare & Blanche Coss & Cook
November 13, 2013
Wonderful person! Respected musician and composer We will miss him.....
Maria Teresa Madeira
November 13, 2013
Gaudencio, my beloved and only brother
Your passing is teaching me a gentle
profound way of loving: the love that comes after loss
The light of your music (an enduring joy) and the kindness of your heart fill my life
This morning I heard the birds in our forest home and they were singing your name:
Gau, Gau, Gauuuu...
Amadeu Thiago de Mello
November 13, 2013
Friend, comrade, mentor -- such a loss. Thiago would say "FEEL GOOD!"
Rich Lesnik
November 13, 2013
I know that Thiago will be sending his hugs to us from the other side of the river, and I'm sure we'll find him there making instruments and beautiful swinging sound...
Cliff Korman
November 13, 2013 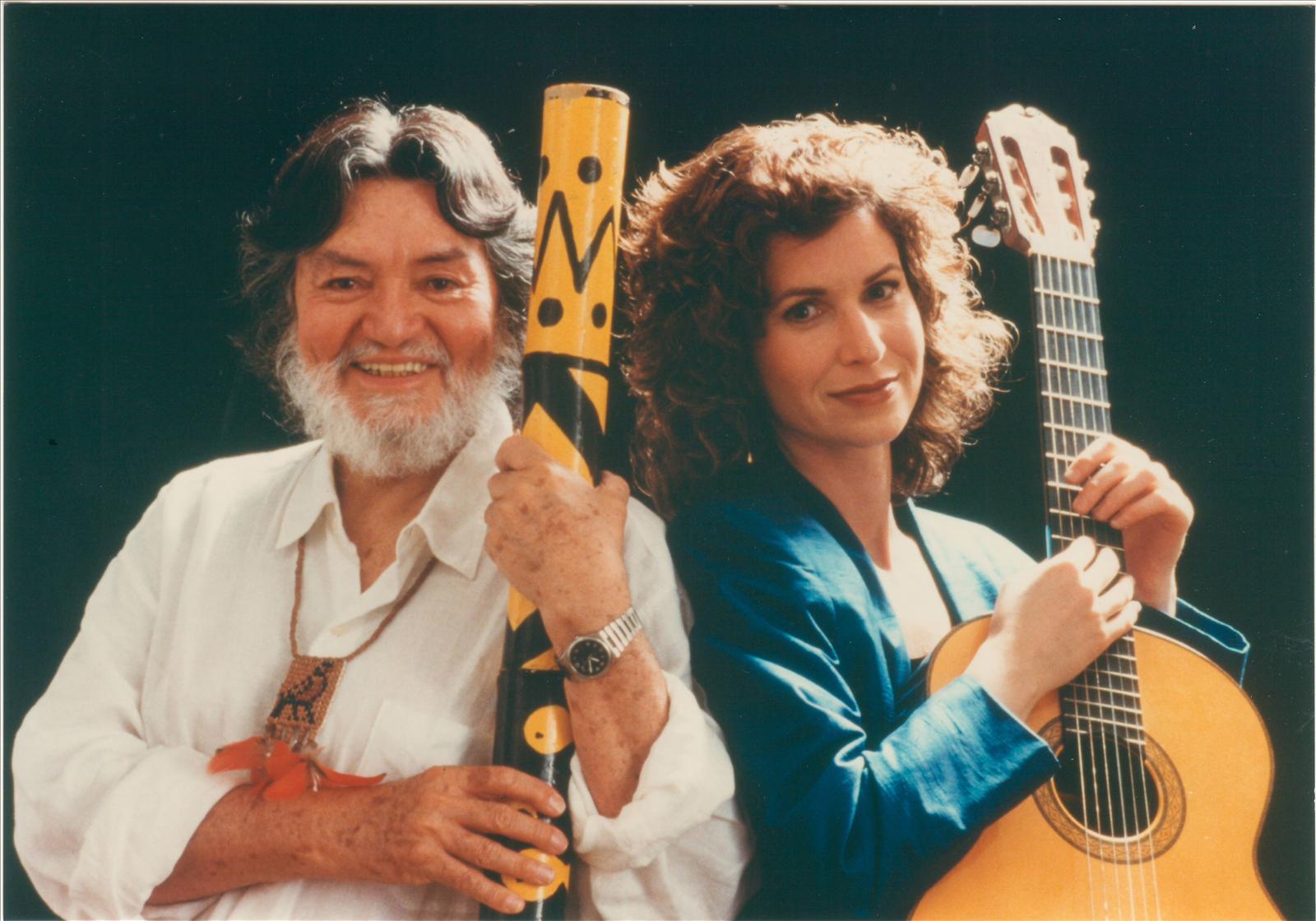