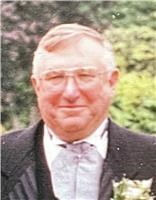 Born July 20, 1937, in Olean, he was the son of Clair Joseph and Chloe Esther (Clayson) Dunn. On June 8, 1963, at St. Mary of the Angels Church in Olean, Jim married the love of his life, Patricia Ann Wisel, daughter of Joseph Leopold and Gertrude Alene (Dibble) Wisel of Olean. Patricia predeceased Jim on Oct. 13, 2007.

Jim attended St. Mary's Academy and Olean High School, and in 1955 he graduated from Ferndale High School, in Washington state. He was a talented athlete, fielding the position of pitcher on Olean and Ferndale baseball teams.

Jim served in the U.S. Army from November 1960 through November 1962, completing boot camp at Fort Dix, N.J., and serving in Company B in the 2nd Infantry Brigade at Fort Devens, Mass.

Jim had a distinguished career as a firefighter for the city of Olean from 1963 to 1987. Concurrently, given his strong work ethic, he was employed by Shearer trucking. From 1987 to 2000, he served as a security and fire safety officer for Saint Bonaventure University.

In 2002, Jim and Patty happily retired to Little River, S.C., where the family gathered for memorable holidays and vacations together. Feeling the call of the hills he loved, Jim returned to Portville in 2012.

In his last decade, he reveled in evenings sitting on the front porch with his children, telling stories and laughing over a glass of red wine.

From a young age, Jim was an avid outdoorsman, enjoying trapping, hunting and fishing. He cherished Western New York and hunted many of the enchanted mountains of the Allegheny River Valley.

He loved music and enjoyed playing the guitar and singing with his strong baritone voice. He looked forward to Sundays doing the New York Times crossword puzzle and relished language, lyrics, turns of phrases and vocabulary. He was a prolific reader, especially of westerns, detective and spy novels.

He was a formidable Euchre, chess and billiards player, and enjoyed tennis and golf in his earlier years. Watching baseball and football games was a favorite pastime, and he was a die-hard fan of the Buffalo Bills.

Jim is survived by his four children, Patrick (Laurie), Michael (Carlo), Joseph (Gustavo) and Heather; five grandchildren, Kyle, Connor, and Chloe Dunn, and Edward and McKenna Scott, of whom he was so very proud; his sister, Kathleen (Christopher) Matteson of New Holland, Ill.; and many nieces and nephews.

Jim was surrounded by his loving family until his last breath, and he will be sorely missed. A celebration of his life will take place at a future date.

Funeral arrangements are under the direction of Letro-McIntosh-Spink Funeral Home, 24 Genesee Parkway, Cuba. Interment will be in St. Bonaventure Cemetery, next to his beloved wife, and nearby his parents, aunts and uncles.

In lieu of flowers, memorial contributions may be made to the Portville Historical & Preservation Society, PO Box 59, Portville, NY 14770 or the Pfeiffer Nature Center at pfeiffernaturecenter.org.

Online condolences may be made at www.LetroMcIntosh SpinkFuneralHome.com.
Published by Olean Times Herald on Jan. 13, 2022.
To plant trees in memory, please visit the Sympathy Store.
MEMORIAL EVENTS
To offer your sympathy during this difficult time, you can now have memorial trees planted in a National Forest in memory of your loved one.
Funeral services provided by:
Letro-McIntosh-Spink Funeral Home Inc
MAKE A DONATION
MEMORIES & CONDOLENCES
Sponsored by Letro-McIntosh-Spink Funeral Home Inc.
1 Entry
Moe was a great friend. I could always rely on him when he worked for me. RIP Moe.
Terry Shearer
January 13, 2022
Showing 1 - 1 of 1 results