John R.C. Mitchell VIRGINIA BEACH - Retired U.S. Navy Capt. John R.C. Mitchell, 81, reached out and took the Lord's hand on Monday, May 30, 2011. Capt. Mitchell was born in Youngstown, Ohio, graduated from Quincy High School in 1947, from the U.S. Naval Academy in 1952 and received his Navy Wings in 1953. He was a veteran having served in the U.S. Navy for 28 years and was a candidate for the Mercury Astronaut Program. Capt. Mitchell served as a squadron commander, airgroup commander, F-14 project manager NAVAIR, the commanding officer of the USS Sylvania and the USS John F. Kennedy. After retiring he went to work for a Navy ship repair facility. He was a man of many talents, an artist, a writer and a pilot. Capt. Mitchell had a passion for the sea and spending time with his beloved grandchildren, Jack, Erin, Daly, Emily, Matt and JJ. Left to cherish his memory are his loving wife of 34 years, Janellen; children, John McHugh, Katherine Nickel, Marcie McHugh, Joanne Ourednick, John Mitchell, Harold Mitchell, Dana Mitchell, Ardis Yahna and their spouses; and host of grandchildren. A memorial service will be held Friday, June 3 at 7 p.m. at St. Nicholas Catholic Church, 712 Little Neck Road, Virginia Beach, VA 23452 with a reception to follow. In lieu of flowers, memorial donations may be made to the American Cancer Society, Operation Smile or Autism Speaks. Condolences may be expressed to www.cremate.org.

Published by The Virginian-Pilot on Jun. 2, 2011.
To plant trees in memory, please visit the Sympathy Store.
MEMORIAL EVENTS
To offer your sympathy during this difficult time, you can now have memorial trees planted in a National Forest in memory of your loved one.
MAKE A DONATION
Please consider a donation as requested by the family.
MEMORIES & CONDOLENCES
27 Entries
I flew Banshees with John in 56-57 aboard the USS Yorktown. Terrific pilot and one great guy. He taught us nuggets a lot. Richard Dupree
Richard Dupree
June 25, 2011
Served aboard Kennedy from 75-79.under Captain Mitchell, was Commanding when i first deployed with VA-34 CVW1.
What a leader, a sailor's sailor. Thanks Skipper, If my love for the Navy is any measure then you did well.
Fair Winds ...
Bob Ascolillo AE2/VA34
June 25, 2011
I served under Captain Mitchel from 76-77 in the S-1 Div. He was a great skipper who cared about his men. My condolences to his family. May he rest in peace.
Robert Force
June 25, 2011
I served onboard JFK from '74 - '78 in cats and elevator repair. Capt. Mitchell was the epitome of a true leader as well as just being "one of the guys". Fair winds and following seas, Skipper.
Jesse Ouwens (San Diego, CA)
June 25, 2011
As a 17 year old kid going to sea for the first time on board the USS John F Kennedy. One thought came to mind "I hope this guy knows how to drive this thing". Thanks skipper for making it look easy. Rest in peace James Maravelias HS-11 1976-1980.
James Maravelias
June 25, 2011
RIP Skipper....Kress R-Div
John Kress
June 24, 2011
John was my North Star as I began my career as a Naval Aviator in VF 193 in the middle fifties. We made a WesPac cruise in 1956 in USS Yorktown. Gail R Bailey, Cdr USN Ret
Gail Bailey
June 24, 2011
I had the opportunity to serve onboard the Kennedy prior to and during Captain Mitchell's command. He came aboard at possibly the toughest time anyone could and brought us back up to speed quickly.
The Skipper will be missed by many of us. He was a great C.O. to work for.
James Tuttle
June 24, 2011
I server under Capt Mitchel from 75-77 on the J.F.K ABE2 Dominick Nista. My prayers are with you and the rest of your family.
Dominick Nista
June 24, 2011
I served under Capt. Mitchell his full tour on the JFK. He was a Great, Fair Man, Met him face to face coming out of the engine room, he knocked me to the deck and couldn't say he was sorry enough even though it was my fault entirely! BTC(SW)(RET)McCombs.
My Condolences to his Family.
William McCombs
June 24, 2011
I served under Capt Mitchell on J F K. from 76-77. BMCS (RET) JOHNSON
william johnson
June 12, 2011
To the family of Capt. Mitchell; I served onboard the JFK/CV-67, from 2/75-6/78, he was a Good C.O., loved to go to sea! Some of us called our ship "U.S.S. Underway". Fair Winds and Following Seas, George Mozakis/ HT1,USNR-R,
George Mozakis
June 11, 2011 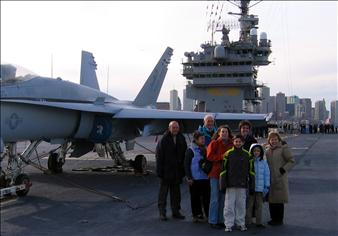 Joseph Stanganelli
June 10, 2011
To wife Janey, all his children,and all his grandchildren:


He took the helm of the JFK just after the collision with the USS Belknap and took our crew through the recovery and return to service. He became the guiding light and our leader in a time of stark darkness.
Calm winds and following seas My Captain... Bravo Zulu.
And may the perpetual light shine upon you and all of your family.
D J Guidry Architect NAVFAC USS JFK 73-77
David Guidry
June 10, 2011
Janey, my prayers are with you. I am saddened to hear this news. I am comforted to know that he is with God and many other patriots.
Patricia Perkins Moss
June 8, 2011
07JUN11.0031

Hello, my name is Bob Haner, and I am the President of the USS JOHN F. KENNEDY (CV 67) Association. We are the former crew of the ship, that Captain Mitchell was in command of from 1975-77. I want to express to his family and friends, the condolences of the entire crew on his passing. His name will be read (along with our other Shipmates who have passed) at our upcoming reunion in Norfolk, and at all future reunions. His name will also be placed on our memorial plaque. If there is anything we can do to help, please feel free to contact me. Also to his family I want to extend an invite to that upcoming reunion (8-11 SEP 11 in Norfolk). You may contact me for further details if your interested. Remember he is at peace now, and where we all hope to be some day.

TCAMGB (Take care and may God Bless).
Very Respectfully,
Bob Haner, President, USS JOHN F. KENNEDY (CV 67) Association
Bob Haner
June 6, 2011
I will truly miss this Man. Many hours were spent discussing everything new and old, mostly things with wings. He has now reached up and touched the face of God.
Richard Lutz
June 6, 2011
To Janey, all his children,and all his grandchildren:

John Mitchell was a remarkable man. His loss to family and friends is sad, and our thoughts and prayers are with all of you, that God comfort and fill you with peace that his was a life well lived, a country and a God well served, and family and friends well loved.

Our hearts to yours,

Ron and Barbara Reed
Barbara Reed-Polatty
June 5, 2011
Janey, just caught this on Facebook. Very sorry for your loss. My family wishes you and yours the best through this sad time. The Nichols Family.
Gus Nichols
June 5, 2011
Janey, Katherine and family...Gary and I adored John. We are so sorry for your loss. Our thoughts and prayers are with you always.
Gary&Elizabeth Nickel
June 4, 2011
As the days and weeks pass, and as you return to life's routine, may you continue to feel comforted by the love and support of family and friends.
Donna Brennan
June 3, 2011
We pray that the memories of John's wonderful life on this earth and his outstanding service to our nation will bring peace and joy to his family. We send our deepest sympathy to Janey and family.
With love and blessings,
Rear Admiral & Mrs. David Polatty, Cape Cod MA
June 2, 2011
May God wrap his arms around you and comfort you during this difficult time. Our thoughts and prayers are with you.
The Redmond family
June 2, 2011
I am so sorry for your loss. You all are in my thoughts and prayer. He will truely be missed.
Christine Cahoon
June 2, 2011
Re: Uncle Johnny
I am so sad to hear about your loss. Sending warm regards to my cousins Dana, Ardis, Harold, John and Joanne and my Aunt Billie too. Such a nice man. I remember our visits with him in Spain when he was the captain of the USS SYLVANIA and the JFK back in the 1970's
God Bless your whole family.
Heather MacBride
June 2, 2011
Our thoughts and prayers are with you in the lost of this wonderful man, Sending our love and hugs! Steve and Kathy Wilson (Polatty)
Steve & Kathy Wilson (Polatty)
June 2, 2011
John was my uncle - mom's brother, and though I didn't get a chance to spend as much time with him as I would have liked, the time I did spend with him will forever be in my heart. He was a good man, God rest his soul...
Deniston Haff
June 2, 2011
Showing 1 - 27 of 27 results