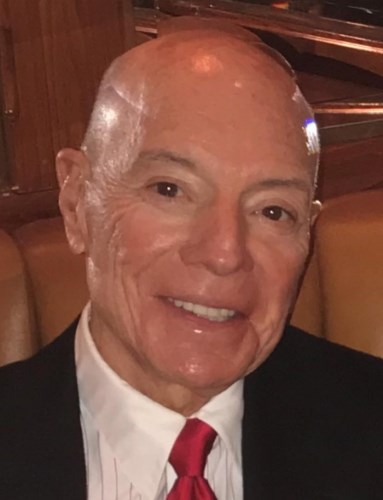 BORN
1942
DIED
2021
FUNERAL HOME
El Camino Memorial – Sorrento Valley and El Camino Memorial Park
5600 Carroll Canyon Rd
San Diego, CA
Allen R. Glick
April 11, 1942 - August 2, 2021
La Jolla, CA
Allen R. Glick passed away peacefully in his home surrounded by his beloved family after a long, courageous battle with cancer. Allen is survived by his loving sweetheart of 25 years, wife Kathleen Glick, his sons whom he was immensely proud of Todd and Cary Glick, and cherished grandsons Aaron and Adam Glick. Allen was born in Pittsburgh, Pennsylvania on April 11th, 1942, son of Jack and Pearl Glick. He attended The Kiski School, earned his BA at Ohio State University, and his JD from Case-Western Reserve School of Law. Allen was admitted into both The California and Pennsylvania Bars. Allen entered the military in 1967 as a First Lieutenant in the Military Police Branch. He was transferred to Special Operations where he served as a Captain in Vietnam. He learned to speak Vietnamese to aid the Army in military search and rescue operations. His bravery there showed no bounds and for that was awarded The Bronze Star, three Combat Air Medals and the Vietnamese Medal of Honor. He was Honorably Discharged in 1969. Allen's business accomplishments are immeasurable. He joined the American Housing Guild of San Diego, and the Saratoga Land Development Company. From there he went on to form his own company which purchased the Hacienda Hotel and Casino, Las Vegas, Nevada. The hotel was developed into a first-class property with the largest recreational vehicle park in Southern Nevada. He pioneered the development of the south end of the Las Vegas "Strip". In 1974, Allen acquired Recrion Corporation, (subsequently renamed Argent Corporation). As Chairman and President of Argent Corporation, Allen owned and operated the Stardust Hotel and Casino, Fremont Hotel and Casino, and Marina Casino. Argent Corporation was one of the largest owners of casino and hotel properties in Nevada in the mid-seventies, bringing the first race and sports book operation to the "Strip". His company was also responsible for bringing the Siegfreid and Roy show into prominence. Allen sold his Las Vegas holdings in 1980. He was second only to Howard Hughes in the ownership of hotels and casinos. Allen was President and owner of ARG Enterprises, LLC,in La Jolla, California.

The company was a private, diversified company whose central activities were real estate investments, (apartments and warehouses). The company has been involved in projects in Southern and Northern California, Arizona and Oregon. He served as advisor and/or consultant to several real estate developers in the context of financing and strategic planning. In addition, Allen was involved in advising, structuring and mediating several ventures for private investors. He has had joint ventures with the Lai Sun Group, Hong Kong, PAGOR (Philippine Amusement and Gaming), and Marco Polo Pure China Fund, Hong Kong. Allen owned several casinos in Costa Rica, was the innovator and developer of the Philippine Dream, a floating entertainment center located in Cebu, Mactan, Philippines. He was responsible for the expansion of the successful lottery operation in Caracus, Venezula by introducing VLT machines. He also was involved in the development and building of one of the major office complexes in Georgetown, Grand Cayman Islands, B.V.I, and with the building and operation of a major entertainment center in Macau.Allen's board memberships included Former Chairman and member of Scripps Memorial Hospital Advisory Board, La Jolla, California, Challenged Athletes, San Diego Sheriff Association, Kiski Board of Trustees, Saltsburg, Pennsylvania Even with his many business accomplishments, the greatest measure of his life was his devotion to his wife Kathy, his family and friends. Allen lived a full and wonderful life enjoying many global adventures. Allen will always be remembered for his generosity and kindness. His presence will be dearly missed by all those that knew him.We will be celebrating his life on Thursday, August 5th. 10 AM Memorial Service @ Congregation Beth Israel - 9001 Towne Centre Drive, San Diego, CA followed by a 12 PM Graveside Service @ El Camino Memorial Sorrento Valley - 5600 Carroll Canyon Road, San Diego, CA with a reception to follow graveside service 1 to 3 PM.
Published by San Diego Union-Tribune on Aug. 5, 2021.
MEMORIAL EVENTS
Aug
5
Memorial service
10:00a.m.
Congregation Beth Israel
9001 Towne Centre Drive, San Diego, CA
Aug
5
Graveside service
12:00p.m.
El Camino Memorial Sorrento Valley
5600 Carroll Canyon Road, San Diego, CA
Funeral services provided by:
El Camino Memorial – Sorrento Valley and El Camino Memorial Park
MAKE A DONATION
MEMORIES & CONDOLENCES
Sponsored by El Camino Memorial – Sorrento Valley and El Camino Memorial Park and Mortuaries (Sorrento Valley).
5 Entries
Our condolence, my mother was there house keeper manager (Martha) for several years and helped with Cary and Todd ...she has many stories about how good of a person he was....God bless you guys ...my mother was just showing us a gift Kathy gave her ,the kindness and firm family my mother knew....he will be missed...
Sanchez/Range family
Family
August 7, 2021
My condolences to the Glick family. Allen and I played football at Kiski together. Great right guard! Tom Westerfield `60
Tom westerfield
School
August 6, 2021
I watched Casino today, and did some research into the film, as well as some of the people involved, only to see he passed away just a few days ago and that his service was today. I´m sorry to hear he passed, and I hope he rests in peace.
Ben Pepper
August 6, 2021
kathy was so sorry to hear about Alan when i heard from Betsy this morning.
mark berger
August 5, 2021
I loved our shared Sq Hill Pittsburgh background and his enjoying it as well. Always so friendly when seeing him at spin and around La Jolla ... will miss him. Condolences to Kathy and his family.
SUSAN SLESINGER ULEVITCH
Friend
August 5, 2021
Showing 1 - 5 of 5 results