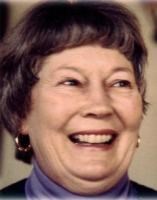 Margaret R. Koch was born April 13, 1918 in Sacramento, California. Her father was Dr. George James Rau, a dentist and U.S. Naval Officer in World War I. Her mother was Callista Marie Martin, a teacher. She also had a younger brother, George James Rau, born in 1919.

She grew up and spent almost her entire life in Santa Cruz, California. Margaret studied journalism at U.C. Berkeley where she met her husband, Edward C. Koch. They were married in 1938, on Margaret's birthday April 13th.

Margaret was a staff writer for the Santa Cruz Sentinel newspaper for over twenty years. She was a California historian and published six books. She was a community activist and key in preserving and restoring historic downtown Santa Cruz. She was also named woman of the year in 1972.

She and Ed were world travelers and very adventuresome, starting with a car trip-honeymoon from California to Mexico City in 1938. The entire family spent two weeks every summer hiking and camping in the High Sierras of California. Margaret and Ed traveled to Japan, Russia, China, South America, Guatemala, Mexico, Europe, British Isles, Australia, New Zealand and the South Pacific.

They had two sons, Edward and Thomas and a daughter Kathleen. They had five grandchildren and four great-grand children.

There will be a small memorial service at Crystal Terrace on Sunday, January 16th at 1:00 PM. A private family service will be held in April in Santa Cruz on the property that has that has been in the family for six generations.

Published by Santa Cruz Sentinel on Jan. 23, 2011.
To plant trees in memory, please visit the Sympathy Store.
MEMORIAL EVENTS
To offer your sympathy during this difficult time, you can now have memorial trees planted in a National Forest in memory of your loved one.
MAKE A DONATION
MEMORIES & CONDOLENCES
2 Entries
ADDIO, MARGARET. As one of my sources for historical background in writing my book, "La Nostra Costa" (Our Coast), I extensively used your book, "Santa Cruz County, Parade of the Past", published in 1973, by Valley Press. Thanks Margaret for enlightening and educating us all with your life and great works.