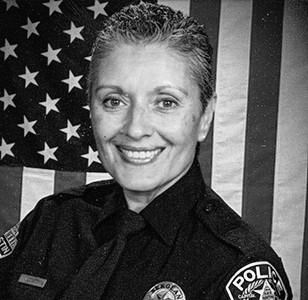 After a protracted battle with cancer, Christine Marie Jacobson died on November 4th, 2014 in San Marcos, Texas at the age of 54. Christine was born on November 27th, 1959 in Ft. Worth, Texas. Christine is survived by her husband, Scott Jacobson; her son, David Schrieber; her step-children, Erik Jacobson and Rebekah Jacobson; her father, Henry Gonzales and step-mother, Dorothy Gonzales; as well as, her siblings, Ezra Smith, Casey Gonzales, Tony Gonzales, Timmy Gonzales, and Tonya Hendrix.

She was preceded in death by her mother, Marcella Smith and her son, Christopher Schrieber.

In college Christine was interested in criminal justice. That interest eventually led to her career as an officer with the Austin Police Department. She joined the force in 1990. Christine excelled in her career and was promoted. At the time of her retirement in September of 2013 she held the rank of Sergeant.

Christine met Scott Jacobson while working for APD. Scott was a fellow officer. They were married on November 9, 2005. At the time of her death they were both retired and living in San Marcos, Texas.

Christine had many special qualities and talents. She had a beautiful voice and shared it by singing on the worship team at San Marcos Community Church. She was passionate about praising Jesus with her voice and with her life. That passion was expressed in her unwavering devotion to her family and her friends.

Christine loved many things in her life. She loved her family and friends, her animals, beautiful flowers and gardening. She loved nature and everything pertaining to wolves. She loved to read and her favorite book was the Bible.

When diagnosed with cancer in 2011, she remained dedicated to her work and in her will to fight her illness. Many have said that Chris was somewhat "stubborn" but it was that tenacity that enabled her to hold onto her faith and that caused her to be a bravely courageous and Christ-centered woman, even throughout her final days.

In lieu of flowers, memorial contributions are suggested to the American Cancer Society.

Please visit Christine's memorial site at www.cookwaldencapitalparks.com where you can share memories and leave condolences for her family.

Published by Austin American-Statesman from Nov. 7 to Nov. 9, 2014.
To plant trees in memory, please visit the Sympathy Store.
MEMORIAL EVENTS
Nov
9
Visitation
2:00p.m. - 3:00p.m.
Cook-Walden/Capital Parks Funeral Home
14501 North Ih-35, Pflugerville, TX
Nov
9
Funeral service
3:00p.m.
Cook-Walden/Capital Parks Funeral Home
14501 North Ih-35, Pflugerville, TX
Nov
9
Interment
Cook-Walden/Capital Parks Cemetery
Pflugerville, TX
Funeral services provided by:
Cook-Walden/Capital Parks Funeral Home
MAKE A DONATION
Please consider a donation as requested by the family.
MEMORIES & CONDOLENCES
Sponsored by Cook-Walden/Capital Parks Funeral Home.
14 Entries
Dear Scott and David. The family gives much appreciation for the love and care that you gave to Christie. There is far too much to put into words to go from the time she was born until this time' The entire family is grateful to all who were a part of the life of Christie.as friends also. To you we offer our condolences and the blessings of God.
Thank you, Paster., Christie often spoke of the church and the prayer and music there .
Coreeta Rodriguez
November 23, 2014
God bless you...Our Hero!! We were sister in blood friends when apart...close at heart through many memories and I was fortunate to be blessed by the best. I looked up to you ..often bragged about who you were and will always be. And still I will continue your legacy..in my eyes You be da greatest fighter...A until Eva always said you are a Gonzales your strong look at Chris shed say...vyou can do it. You are my Hero forever.
So proud to have been your family.
I was your baby girl...love you.
Sis.Tonya Hendrix's on
Go in spirit watch over
Me. Xoxo
Tonya Hendrixson
November 19, 2014
When I think of the first time I met Chris, 1990 doesnt seem so long ago. There are a few who enter your life and their "being" stays with you through time. What a smile that day still brings me.
Joyce Casey
November 14, 2014
Alice Guckian Queen
November 8, 2014
To all the family and friends. The Lord always keeps His word. I am assured the Lord Jesus is with Christine and she is happy. Although are hearts are in pain from the void left by her absence here on this Earthly plain. As time passes our hearts will be healed as our walk and believe in the Truth increases. You will be missed Christine. And we will see you again. Steven Martinez
Steven Martinez
November 8, 2014
Dear Scott,
We extend our deepest sympathy to you and all those who were close to Chris. We also pray for you, Scott, as you move on with your life. May the same spirit that was so present in Chris be with you as well.
Our love,
Pastor Mag and Pastor Charles
November 8, 2014
I did not know your wife personally but I want you to know that she touched my life through my daughter in law Holli who is also fighting cancer. She was used by God in such a special way to minister to others like my daughter in law Holli. When all is said and done in this life isn't that what we are supposed to do? Do unto to others as you would have them do unto you? I believe that is what your wife did and what a wonderful celebration she must be having in heaven right now. God Bless you all and may you find God's comfort through all of this. I am praying for you and your family.
Kay Barrett
November 8, 2014
My sympathies. You and you family are in my thoughts.
Ruth Roberts
November 7, 2014
May God be with you Christine and Scott Jacobson.
Richard Martinez
November 7, 2014
Scott as you already know, Chris was such a loving, wonderful person who I will always remember. She has left a special place in my heart and I will never forget her. Prayers and blessings to you and all of her family.
Alisa Slevin RN, OCN
November 7, 2014
Chris, I know you are resting in peace. Scott, my heart goes out to you during this time. May wonderful memories bring you some comfort. Thinking of you...
Trish Jacobson
November 7, 2014
My sincere condolences to the Jacobson family. I believe that Christine is at peace. I hope that Scott and the family are able to find their own peace in this time of loss.
David Parkinson
November 7, 2014
Christie
I never really thought this day would truly ever come. Thank u for your prayers and techings on faith. You Scott and David will always be in my thoughts and prayers. You left your mark on the earth.
Tina Rodriguez
November 6, 2014
I am so very sorry for your loss. You and your family are in my thoughts and prayers.
Angela Schrieber
November 6, 2014
Showing 1 - 14 of 14 results