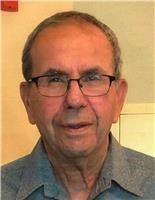 Augie grew up and was educated in Norton schools and during the Korean War, he honorably served his country as a member of the United States Air Force.

Augie's family was truly the essence of his life and he especially treasured the times spent and memories created with his grandson. He was a talented builder and was ever-so-proud of the custom home he built in Belmont, NH. He received so much pleasure in helping others with their home projects as well and also enjoyed fishing, gardening and golfing.

A funeral service will be held at the conclusion of visitation at 12:00 P.M. at the Norton Memorial Funeral Home. Burial will follow at the Norton Common Cemetery in Norton.

In lieu of flowers, August's family has requested that donations in his memory be made to the Hope Health Hospice Center, 1085 North Main Street, Providence, RI 02904.