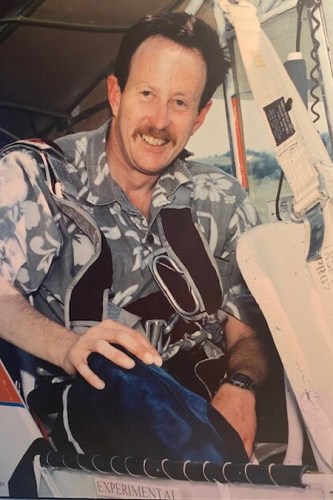 FORT WORTH, Tex. - John Conlin MacGuire was born in Casper, Wyoming April 28, 1956 to John and Mary MacGuire. John was the third of five children and grew up spending time in the mountains riding horses, shooting and camping with his family. John attended St. Anthony's grade school in Casper. As a child John showed an intense interest in aircraft of all types. He participated in high school science fairs and his outstanding work led his to his first patent at the age of 17.

John earned an internship with the Ames Research Institute in California. During his senior year in high school, he participated in the International Science Fair in Tokyo where he placed second overall in aerospace. He was personally congratulated by the Emperor of Japan for his achievement.

John was awarded a full scholarship to any college of his choice and he chose Princeton University majoring in aerospace. He was hired by McDonnell Douglas where he worked for several years. He was recruited by General Dynamics Advanced Design, later Lockheed Martin where he spent the remainder of his 25 working years in advance design and hyper-sonic research. John modified an airplane to fly competitive International Aerobatics. He was ranked top ten in the world in extreme aerobatic flying, eventually competing against the Russian team.

He sustained a career challenging injury in his modified airplane. The injury left him a T4 paraplegic for the last 25 years. He returned to work within three months of his injury and to flying one year later. John obtained additional patents while working for Lockheed. He consulted for the Department of Defense, traveled to the Pentagon, managed the product team for the HTV-2 Falcon with DARPA and consulted to the US War College. John was awarded the handicapped employee award for aerospace achievement twice in his lifetime. After his retirement from Lockheed, John consulted actively for another defense contractor in the Dallas Fort Worth area.

John led a life of intense interest in the physical world, science and the advancement and improvement of America's defense capabilities.

John leaves behind a loving wife, Anne Jeffery in Godley, Texas; family and friends that were so impressed by his courage and intellect.

John Passed away peacefully on February 7, 2021.

To plant trees in memory, please visit our Sympathy Store.
Published by Casper Star-Tribune on Feb. 21, 2021.
MEMORIAL EVENTS
No memorial events are currently scheduled.
To offer your sympathy during this difficult time, you can now have memorial trees planted in a National Forest in memory of your loved one.
Funeral services provided by:
Crosier-Pearson Cleburne Funeral Home
GUEST BOOK
8 Entries
My condolences to the family . May you find comfort in your treasured memories and Gods promise to return our loved ones . 1st Thessalonians 4 : 13 & 14 .
February 24, 2021
The world has lost a bright light, John was an incredible engineer but he was also a man of incredible kindness and the world is a lesser place without him. My deepest condolences and prayers for peace to his family.
Cory Tallman
February 23, 2021
I was so sorry to hear of John's passing. We were classmates at St. Anthony's all those many years ago. I remember him fondly. He always had ruddy cheeks. Even though he was quiet, he always had a smile on his face. Even 60 years ago, you just knew this smart boy would go far. RIP dear John. I know the angels escorted you home.
Jamie Kraen Bodyfelt
February 22, 2021
Anne, I am so sorry for your loss. You are in my thoughts and prayers, along with your family.
Beth Thorp
February 22, 2021
John, you were always the engineer, performing trade off studies for just about every decision - what airplane to replace the Pitts, what car to drive, how to design a hangar/home that was wheelchair accessible... Fly high!
David Francis
Friend
February 15, 2021
Our hearts are broken. We are still grappling with this reality, and it doesn’t seem right that our sweet friend and neighbor isn’t here now as he always was. We know John is soaring now as never before. He is not bound by anything anymore! His brilliance as we saw it here on Earth is off the charts now in the presence of God. He is living more fully than ever and our love for him will never die. Prayers have been ongoing for his wife Anne and his family, from our family to yours.
Dan and Kathy Clark
Friend
February 13, 2021
John was one of the finest engineers I've ever known, combining seat-of-the-pants common sense with brilliant and practical engineering know-how. He was as critical to our work in hypersonic vehicle development as he was to the Rare Bear speed record. He also designed his own home, car and lifestyle, for which he was frequently sought out for advice. He was working until last week, and he had recently purchased a Tesla, for which he was designing modifications for his use! For all of this, he will always be respected, and will never be forgotten.
What continually awed me about John was that his life and accomplishments never changed as the result of his accident. To me, this was truly a measure of his character. He was the kind of person of whom one would never say ‘just think of what he might have become if not for his accident’. He DID become it, and he was proof that disability was not inability.
On top of all that, John was inclusive and fun to work with. There wasn’t anything John didn’t value in solving problems. He included everyone!
In 35 years of professional association with John, I never saw more commitment from an individual who had faced more adversity, and yet was more inspiring and self-effacing, than John MacGuire.
May God truly bless John MacGuire! He will be sorely missed!
Robert Wetherall
Coworker
February 13, 2021
John was such a great mentor and inspiration to others. He influenced me greatly and I’ll never forget him. Our thoughts and prayers are with you all.
Brian F. Lundy
Coworker
February 13, 2021