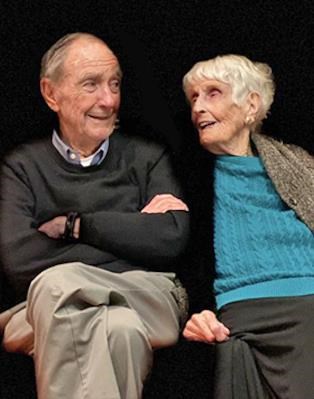 We are sad to say our beloved father Douglas Donahue passed away September 25, 2020 exactly six months after losing his wife of 72 years, Dee Marie (March 25, 2020, also pictured). Some say he died of a broken heart.

He was born on "Douglas" Street in Wichita, Kansas, while his parents were traveling from Minnesota to California, to begin their new life in the West.

Growing up with his siblings Dolores and Leo, he was the ultimate California boy, camping in the San Gabriel Mountains, and body surfing in the Pacific. At 16, he drove his Model A across the Pasadena Freeway on its opening day in 1940.

WWII followed. Doug volunteered for the Navy, while his mother was a "Rosie the Riveter" at the McDonnel Douglas' aircraft plant. He never saw her again. During officer training, she collapsed and died at age 39. Doug was later assigned to command landing craft for the invasion of Japan. After Japan surrendered, he transported troops back from the Pacific.

Returning to school, Doug met his future wife, Dee Marie Moore, at the University of Oregon. They married in 1948 and remained devoted partners for 72 years. Doug earned his PhD in Nuclear Physics at the University of Wisconsin and moved to Washington to work on General Electric's nuclear reactor. He loved Academia, took a professorship at Penn State University and, in 1963, began a 37 year career at the University of Arizona, including time as Chairman of the Physics Department.

Doug was a pioneer in Carbon 14 dating. In 1983, he assisted in establishing the USA's first accelerator mass spectrometry radiocarbon laboratory. He radiocarbon dated materials across the world including dating the Shroud of Turin to the 14th Century and the Dead Sea Scrolls to the 1st Century.

Doug's career was Physics, but his passion was his family and community. He taught the value of hard work, education, community engagement, compassion and generosity and choreographed family travels across the United States, Mexico and Europe, including sabbaticals in Oxford and Munich. He served with the Sam Hughes Neighborhood Association and was president of the St. Vincent DePaul Conference. He was an active tennis and badminton player into his nineties, competed in the Arizona Senior Olympics, and medaled in the National Senior Olympics in 2001 and 2007.

Doug is survived by his sister, Dolores; children, Mary, Patrica, Margaret, Shivaun and Doug; grandchildren, Lorna, Jack, Theo, Andrew, Tim, Tom, Sean, Ian and Ana Maria and great-grandchildren, Evelyn, Justino and Jack. A funeral mass and celebration of life will be held in Tucson for Dee and Doug when Covid is behind us. Donations can be made in Doug's memory to St. Vincent De Paul at Saints Peter and Paul, Tucson.

Published by Arizona Daily Star on Oct. 25, 2020.
To plant trees in memory, please visit the Sympathy Store.
MEMORIAL EVENTS
To offer your sympathy during this difficult time, you can now have memorial trees planted in a National Forest in memory of your loved one.
MAKE A DONATION
MEMORIES & CONDOLENCES
14 Entries
These folks let a young jock into their lives and never treated me like anybody who was anything else. Spending time in the carbon dating room became my escape from coach lunches. We first met at the Newman Center on campus and quickly became my daughters adopted God Parents. Although I was a 38-year-old Philosophy/Law student, Doug was a Mentor, Hero, most importantly, a man I called my friend. They both Loved baseball, keeping score under a blanket. I read this morning "Something precious and irreplaceable has to come to an end and something in you has come to an end with us". There is a very good reason for our peace, we have 2 more Angels watching over us.
Dr. Kenneth J.P. Snyder,O.C.D.S.
November 14, 2020
Doug and Dee were our wonderful neighbors for so many years. We still miss them. I have been thinking about them this week as I know they would be celebrating Joe Biden's election with us. Condolences to all the family.
Pat and Mike DeVito
November 9, 2020
I love this picture of your parents! It sums them up perfectly. My husband Dana worked for Doug at the University of Arizona. We were lucky to have been invited to several events with your parents. We always had a great time with them. Our deepest condolences for your family's loss. Heaven has gained some wonderful Angels
Nicole Baca Biddulph
November 5, 2020
Doug was a lovely man. I played badminton with him.I would seek him out to play. Playing with him was such fun! He will be missed.
Tillie Poss
November 5, 2020
I´m so saddened by Doug´s passing. He was the best colleague. Despite retiring not that long after I was hired, he was kind, supportive, unusually active, and interested in discussing physics. His smiling face will be missed by all who had the privilege of having him as a colleague.
Ubirajara van Kolck
November 1, 2020
Just now catching up with the sad news of the loss of the wonderful parents the Donahue family. You all I´m sure are very proud of them and heartbroken at your loss I remember nothing but love coming from them both
Mark Thomson
October 31, 2020
What a loss Margaret. The world is a smaller place without our parents - and their unconditional love. Thanks for sharing his story - it is so amazing. It explains things about you. Our thoughts and prayers are with you.
Al Kinel
October 30, 2020 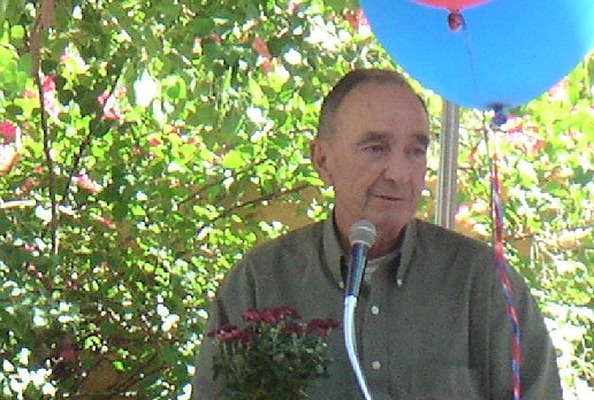 For many decades Doug worked tirelessly to increase the quality of the Department of Physics at UA, and he appreciated the wisdom of showing our resources: He offered to countless visitors a guided tours of the world famous radiocarbon accelerator mass spectrometry laboratory he created. He is well known as a distinguished professor and teacher to many of our Physics graduates. I add a picture from a retirement party in 2003 showing a dear colleague I remember, whose kindness and commitment were well known among his peers. I will keep Doug's warm and understanding personality forever in memory. Condolences to all family. R.I.P.
Johann Rafelski
October 27, 2020
Margaret, I didn´t realize your Dad passed. Knowing what it is to lose ones father, my heart hurts for you. The world is just not the same place. Reading about his life reminded me of what strength, courage, responsibility and vitality is. May everything he loved be a comfort to you. Sending love and kindness. Darcy
Darcy Paddock
October 27, 2020
May Douglas rest in peace! R.I.P.
Traudl Wally
October 26, 2020
uncle Doug aunt Dee were the best. I still remember my visit to Tucson with grandma and grandma Moore in 1969. They tried there best to get me to come there for college. Love and prayers to you guys hopefully when this mess clears up we can celebrate two of the world's best. Love Tik
Tik Moore
October 25, 2020
My deepest sympathy to all the Donahue family members for the loss of this wonderful man. Doug and Dee were both stalwart stewards of neighborhood and community and the important work that it takes to keep our Democracy evolving. I miss them both and am grateful for all the "trees" they planted and the fruits of wisdom their efforts made available to us all.
Molly McKasson
Friend
October 25, 2020
What an incredible story of marriage longevity. So sorry for your loss.
Donna M. Fulton
October 25, 2020
Your father was an exceptional man. Condolences to all his large family.
Elizabeth Rowe
October 25, 2020
Showing 1 - 14 of 14 results