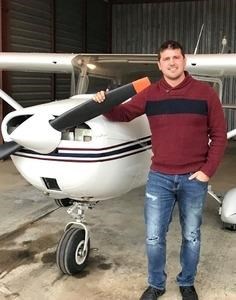 The grand adventure of Timothy's life began on January 10, 1993 in Muskogee, Oklahoma. Always an over-achiever, he insisted on starting homeschool with his older siblings when he was almost 2 years old and graduated from high-school at 16. After a month-long mission trip to Taiwan, and with other mission trips scattered throughout, Timothy tested out of his college classes with less than 2 years of study and received his Bachelor's in Business Administration from Thomas Edison University in 2012.

Timothy then spent a year in Taiwan teaching English in their public schools. Timothy's travels included mission trips to Singapore, the Philippines, Southeast Asia, South Korea, Brazil (Amazon area), Mexico, Costa Rica, Hong Kong, Alaska, and many stateside mission trips. Along the way, he became at least conversational in Chinese, Portuguese, and Spanish. His interests through the years encompassed football, photography, piano, guitar, tennis, antique car restoration, motorcycle riding, sky diving, kayaking, and kite surfing, to name a few, all of which he commenced with the intent to become a professional.

Timothy paid cash for his first fixer-upper house, took a 1,367 mile bike trip with a friend to raise awareness for human trafficking, dug water wells for villagers in the Amazon jungle, built houses in Alaska for flood victims, and restored homes in an Indian Reservation.

A jack of all trades, Timothy's enterprises included home construction, home inspection, and cell tower construction, along with car, plane, and house flipping. In addition, he was EMR, Scuba, and A1 computer certified. After only 2 weeks of job-shadowing his Uncle Curt, he began repairing appliances as a teenager, which led to starting his own company, RSG Appliance Repair. God and RSG sustained him throughout flight training and the many levels of certification thereafter, until he was finally positioned in his dream life of Allison Aviation. Timothy's blessed life included flight instructor (boasting hundreds of students), charter pilot and diver driver, with some undercover manhunts thrown in for fun.

At a young age, Timothy made a decision to follow Jesus Christ as his Lord and Savior and was baptized at Keefeton Freewill Baptist Church. He memorized large passages of scripture and even as a preschooler, could quote 18 Bible verses in a row without prompting. Years of meditating on Scripture led to his amazing success in life. But rather than keeping that success to himself, he used his magnetic personality and generous spirit to invest in the lives of countless others and motivate them to live their dreams, as well. Believing he was indestructible until his purpose was finished, Timothy lived in confidence and assurance that God had his back, and he need not fear.

Public Visitation will be from 9 am to 8 pm on May 6 at Cornerstone Funeral Home with family visitation from 5-7 pm.

Funeral services are under the direction of Cornerstone Funeral Home, 1830 N. York Street, Muskogee, OK. Condolences may be made to the family online at www.cornerstoneofmuskogee.com.